Check out these social media reactions to NMAC changing the name of its annual national conference.

When NMAC executive director Paul A. Kawata announced in a Facebook post dated February 5 that the organization had changed the name of its annual national conference from the United States Conference on AIDS (USCA) to the United States Conference on HIV (USCH), he shared that he’d already heard rumblings of protest against the moniker. (An email sent February 4 had broken the news to those on NMAC’s mailing list.)

Nevertheless, Kawata defended the rechristening, invoking the 1983 self-empowerment manifesto known as The Denver Principles (he was in the room when they were finalized), which led to the formation of the National Association of People with AIDS (of which he is the last surviving founding member). He further argued that many people today consider the word AIDS to be stigmatizing and explained that the decision had been made in solidarity with people living with HIV (PLWH). 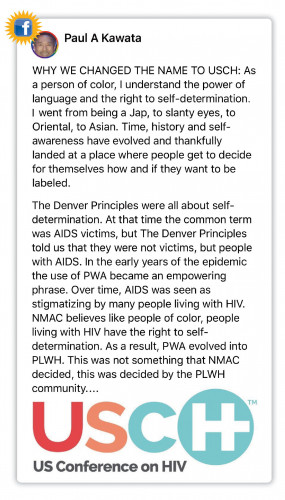 The ensuing response to Kawata’s announcement was far from unanimous, as evidenced by the following selection of comments, proving that words matter and setting the stage for yet another announcement....

- Thank you for your beautiful and well-presented explanation. I think that the concern about trying to erase AIDS is very valid, and I’d like to add some food for thought. All people living with a positive diagnosis of HIV are not living with the disease called AIDS, but all people living with AIDS are living with HIV.... So USCH definitely is more inclusive than USCA. USCH is embracing all of the different stages of this complex and chronic health condition caused by the human immunodeficiency virus.

- I am a 31-year LTS, and my diagnosis has always been AIDS! I have always lingered with low T cells because they have never fully recovered! I understand your point of view my brother, but I feel that this brings more stigma and shame to those that have the diagnosis. Can you all consider USCHA? Include us all! I am not ashamed of my diagnosis, and I have fought along with all my brothers and sisters against the stigma that HIV and AIDS have! We are still here.

- AIDS is only a label. The diagnosis does not define us. I find that the stigma of HIV is no different from AIDS. I don’t believe a name change will promote stigma or divide us unless we allow the name change to become personal in a negative way. Each person is entitled to their opinion.

- Well you failed miserably. I’m a self-determined Denver Principles type of guy LIVING WITH AIDS (or I wouldn’t be here).

On February 12, in a follow-up to the post that kick-started the debate about whether USCA’s new name, USCH, amounted to the erasure of the lives lost to AIDS since the start of the epidemic in 1981—not to mention the lives of those currently living with an AIDS diagnosis—Kawata announced yet another change via a link on Facebook to an NMAC blog post titled “What’s in a Name?”

Going forward, he wrote, NMAC’s annual national confab would be known as the United States Conference on HIV/AIDS (USCHA).

Kawata explained: “I would never intentionally do anything to erase People Living with HIV or AIDS. When NMAC announced the name change of USCA, we thought we were standing in solidarity with PLHIV….  How can we reach the community if we were using a word that they considered discriminatory? Unfortunately, to some PWAs, our action looked like the opposite of its intention…. Our first step was to consult and work with the organizations that were founded and led by people living with HIV and people with AIDS…. We made a mistake, and changing the name to the United States Conference on HIV/AIDS is our way to apologize and hopefully move forward. Activism works!” 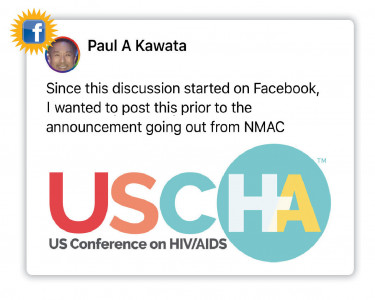 Although the response to this second post was also not unanimous, there was a bit less discord among the comments this time around. Kawata had, after all, taken to heart the concerns of both those living with HIV and those living with AIDS while honoring those lost to the disease over the years. As Kawata emphasized, “Nobody wins when our movement is divided.”

- Paul A Kawata, you are a great leader, and I always will be standing next to you and your words. Thank you so much for your work. God bless you.

- This makes me happy! Thank you for considering our opinions and still keeping us in the conversation! LTS 30 years!

- Grateful to Paul A Kawata and the planning committee for listening and responding. And apologize, as I saw some very disparaging comments. We as a community must do better!

- I am heartened you finally HEARD us. A little listening goes a long way.

- This is much more appropriate, and the title embodies all PLWHA, which is how it should be. Thank you for listening to us!

- Why bother changing the name if you’re just going to continually give in? You can’t please everyone, and for a lot of individuals, this new change will be very stigmatizing for them as you are associating HIV with AIDS.

- Thank you for your quick response to the needs of the community.

- How about fixing the name of the organization too?! Too much cost for paperwork and “rebranding”?!