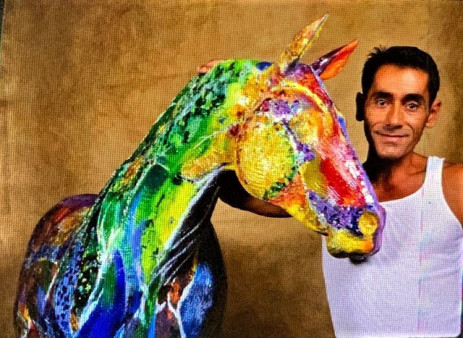 Roger Montoya, the co-founder of Moving Arts Espanola, is being honored by CNN.

For someone who long ago gave up the spotlight of a career in the performing arts, it’s been a year of accolades for Roger Montoya, co-founder of Moving Arts Espanola.

In August, he was named a CNN Hero by the 24-hour news network in honor of the impact he and his organization have had on at-risk youth in Northern New Mexico. In September, Rio Arriba County declared the 24th “Roger Montoya CNN Heroes Day.” October 29th, New Mexico Governor Lujan Grisham honored him by declaring the day “Roger Montoya Art as Medicine Day.” And on December 8, with the help of some active online voters, Montoya just might be tapped as CNN’s Hero of the Year for 2019—an honor which comes with a $100,000 for his non-profit.

Since 2008, Montoya’s arts center Moving Arts Espanola has not only provided training and exposure to local culture by offering affordable (or in many cases free) classes in everything from gymnastics, circus arts, eight forms of dance, musical instrument training, drama, culinary arts, digital design, painting and even fashion design, but they’ve also extended their services to include tutoring and free meals for more than 5,000 students and their families.

But it wasn’t always a life of philanthropy for Montoya. In the 1980s, he was living his dream as a dancer in New York City with a career that boasted training at the Alvin Ailey American Dance Center, an apprenticeship with the Paul Taylor Dance Company, mentorship by Louis Falco of the Jose Limon Dance company, and world tour with Parsons Dance. By his late twenties, his resume was a Who’s Who of the modern dance world. All of that would come to a halt, when, like so many other gay men of his generation, he fell prey to the AIDS epidemic. 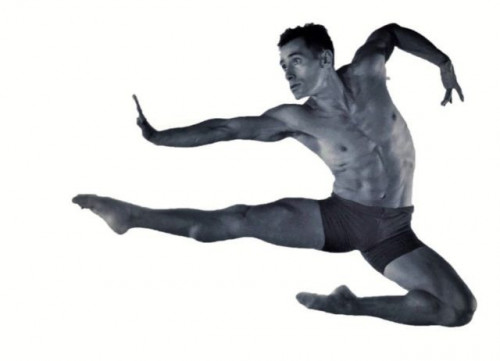 After losing three partners to AIDS and being diagnosed HIV positive himself, Montoya heard his own clock ticking. “I was feeling depleted from fear, worries and the overall sense that it was all going to end soon,” he recollects.

For people living today’s age of PrEP and single pill HIV regimens, it’s almost inconceivable to remember when experimental AZT was the only option. “The first forms of antivirals weren’t available until 1994,” Montoya says. “It was a dicey time.”

Physically depleted and overcome with grief and anxiety, Montoya left New York and relocated to his ancestral home in New Mexico. “I decided it was time for me to come back home to my family to die and enjoy my remaining years while I was still healthy.” 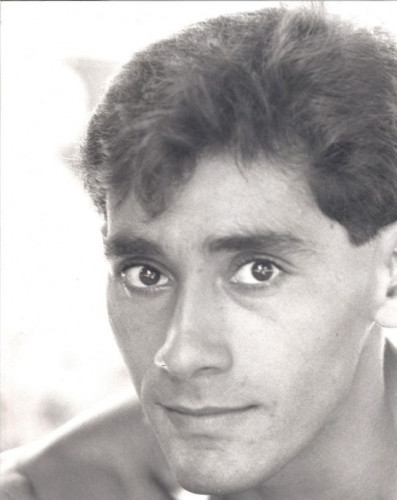 A SECOND CHANCE, A NEW LEASE ON LIFE

But time ended up being on Montoya’s side. And after five years (during which time there were significant advancements in HIV treatment), he felt the need to feed his creative side again and needed to earn a living too.

Noticing a gap in athletic and expressive arts programs for young people, he found funding and equipment, secured a space at Northern New Mexico Community College, hired a staff, and launched Youth Gymnastics of Northern New Mexico. “The kids loved it,” Montoya says. “Because at that time there was nothing here for young people except basketball.” 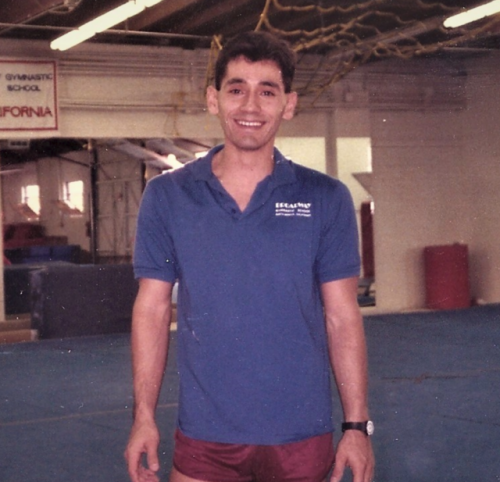 Next it was time for Montoya to regain his own muse. And at 34, five years after moving back to New Mexico, Montoya reclaimed his love for dance.

“I realized that I was still healthy and that I could probably still dance,” he recalls. “So, I helped start a company with Ronn Stewart and Layla Amis called Moving People Dance Santa Fe and began working with different choreographers.”

It was around this time that he re-discovered his passion for drawing and painting. “I created a poster with a sunflower image for an event to raise money for men and women living with HIV.” The event turned into a series of art shows and opportunities for arts educators titled Accentuate the Positive—‘A Celebration of an AIDS Enhanced Life’ with Roger Montoya.” 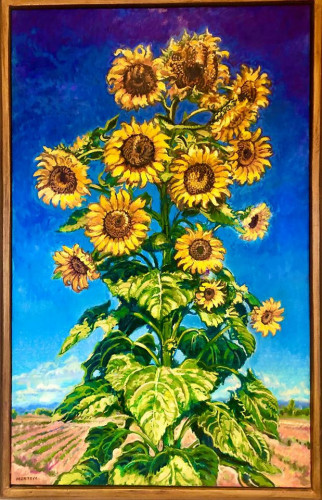 “We did one in Espanola and one in New York City.” He says. “After that, I began painting more ferociously.”

By 1999, after living in New Mexico for a decade, the New York dancer found himself with a full-time career in arts education. As founder of the Arts in the Schools program working with the Espanola school system, he brought in 75 teaching artists to local elementary schools and coordinated a $4 million budget over a period of 10 years that served 12 elementary schools and 3,000 K-6 students.

After becoming frustrated with how public education was devolving into a testing-obsessed bureaucracy, Montoya and Praire Orange cofounded La Tierra Montessori School for the Arts and Sciences, a charter school for students K-8. Since its founding in 2011, La Tierra has created a “feeder program” for the New Mexico School for the Arts. “We’ve sent 35 kids to this prestigious school over the last nine years,” Montoya brags proudly. “They’re now professional and semi-professional artists.” 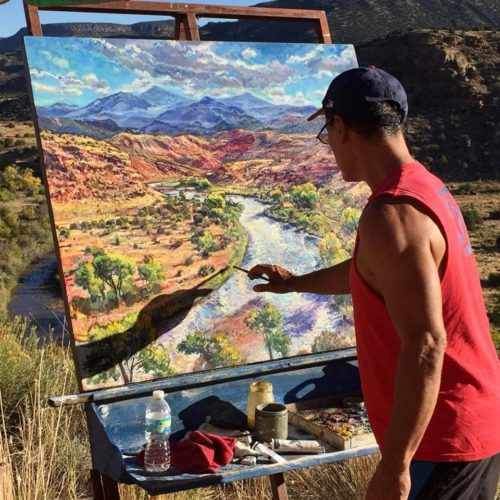 But it was his work with Moving Arts Espanola, which he co-founded with his partner Salvador Ruiz-Esquivel in 2008, that put him on CNN’s radar as a candidate and subsequent finalist for 2019’s Hero of the Year.

“The school offers drama, music, dance, painting, drawing, and more. All of those subjects are available in greater depth in Moving Arts’ after-school programming,” Montoya explains. Kids can select from a menu that includes:

In addition to the classes, there’s a meal program with free vegetarian meals, sourced from local farmers. The facility employs 36 people, half of which are youth. Some kids stay for 12 years and end up working there.

Programming aside, the diverse cultural makeup of Moving Arts and La Tierra (now both located in The Pueblo), fills Montoya with pride.

“Both Moving Arts and the school serve a melting pot community, which includes Native Americans, the Latinx community, Anglos, Sikhs, and more,” Montoya explains. “Today, Moving Arts is a beautiful mixture of diverse peoples and cultures and I’m very proud of that.

These days, Montoya is splitting his time between the school and arts center and a new venture as the Director of Collective Impact through the United Way of Northern New Mexico aimed at helping adult members of the community. He’s helping develop the Espanola Pathways Shelter, slated to open in January 2020.

“We have a growing population of young people; many are my former students who are addicted to heroin. And they’re homeless,” Montoya says.

Working with a developer/philanthropist Jeff Branch from Los Angeles, Pathways will take up residency in a vacant shopping mall. This will be the first ever comprehensive supportive services shelter in the City and County of Rio Arriba.

Montoya’s goal is for it to become more than just a shelter. When complete, Pathways will offer a path to critical treatment, job training/employment, with an onsite café and landscaping company. “We can be a supportive form of transitional housing, a hub of services to bring a pathway to healing and an abundant life,” Montoya explains. 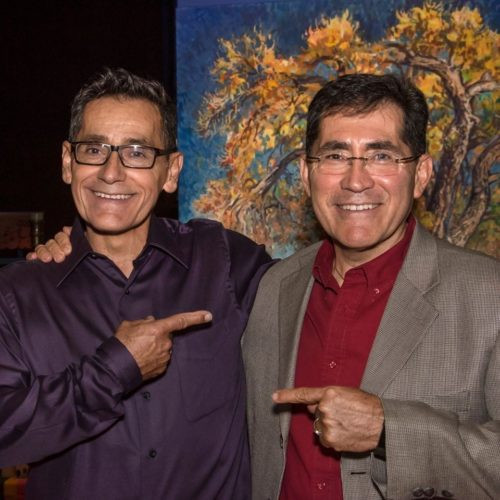 In the three decades since Montoya moved to New Mexico for what he thought would be his final curtain, he’s developed an impressive second act, with his HIV diagnosis serving as a now-or-never catalyst to his initiatives.

“In many ways, my life has been accentuated for the positive by having HIV. My diagnosis gave me a sense of urgency. It made me realize life is very short,” he says. “It also made it possible for me to be bold and courageous, to accomplish what I could in the time that was left.”

He also credits his small community and its fortitude in the face of the opioid crisis. “Espanola is known as heroin capital of the world. When you dig just a little deeper you meet the most amazing young people. There is phenomenal sense of resilience in the people here that is so much in my heart.”

Montoya sees things continuing to turn around in the community. The recent passage of five bond issues that will mobilize funding for the creation of a new senior center and vocational training at the community college and a community health and wellness facility gives him a sense of pride that the actions of a few individuals can make a difference in the lives of many.

“Unlike a place like New York or LA, the smallest bit of work I do here has an immediate impact. This encourages me to do more. When a project inspires me, I’m like ‘Hell yeah, man. Let’s do it.’”

Watch three CNN videos about the work of Roger Montoya.

Tune into CNN on Sunday December 8 for “CNN Heroes: An All-Star Tribute” and be sure to vote for Roger as CNN’s 2019 Hero of the Year here. (Each person can cast 10 votes every single day, now through December 3rd.)

This article originally appeared on realtor Mark Banham’s popular blog, which celebrates many aspects of the Santa Fe LGBTQ+ lifestyle and Northern New Mexico culture, as well as profiles the people who make his community special.