“The issue is AIDS. Where do the candidates stand on education, health care, discrimination? Your vote is a weapon. Use it. We are at war!”*

In 1985, six gay men who were living in New York City (Avram Finkelstein, Brian Howard, Oliver Johnston, Charles Kreloff, Chris Lione and Jorge Socarrás) formed a consciousness-raising collective to support one another during the early days of the AIDS crisis. To express their outrage at the government’s inaction on the issue of HIV, they decided to create a series of political posters. Their first, and now-iconic, poster featured the phrase “Silence = Death” printed in white below a pink triangle against a black background. In early 1987, the collective plastered the poster throughout the city in areas where it would be seen by members of the LGBT community as well as the media. Not long afterward, the activist group AIDS Coalition to Unleash Power (ACT UP) formed, and the collective’s poster became ACT UP’s unofficial logo. The collective became known as the Silence = Death Project and produced two more political posters before disbanding to work on other projects.

The final poster in the series, the Silence = Death Vote poster, which appears on this issue’s cover, was created to boost voting in the 1988 election, when the AIDS epidemic was at its peak. The poster challenged activists to educate themselves about candidates’ positions on HIV-related issues and to cast their votes accordingly.

Today, with the 2020 election nearly upon us, we find ourselves in the midst of a new pandemic. Our scientists and public health experts are under attack. Fear and ignorance regarding the new coronavirus threaten everyone’s health.

But for HIV advocates, such threats to public health are not new. We understand the importance of having access to health care and support when combating a life-threatening illness. We understand the importance of providing factual and unbiased information about how to prevent and treat a virus. We understand that it’s wrong to discriminate against anyone because they have a virus—because a virus does not discriminate. People living with HIV know what it’s like to live with a virus, and HIV advocates know what it takes to fight one.

For the 2020 election, HIV advocates are being challenged to leverage their votes to support candidates whose policies align with strategies for ending the U.S. epidemic. Many of the HIV policies in the United States are determined at the state and local levels, and the next election could have a significant impact on how HIV and other resources are distributed in your area.

To elevate campaign conversations about HIV-related issues, ACT UP New York created a continuing virtual action on ACTUPNY.com that includes information on where each state stands on HIV education, HIV criminalization and Medicaid expansion. On the following pages, POZ has adapted the group’s virtual demonstration to help you determine your state’s stance on the issues and let you know how to contact your candidates to demand action and change.

Are you up to the challenge? Remember to act up, fight back and, most importantly, vote.

Most HIV criminalization laws were passed in the early days of the epidemic and do not reflect advances in modern HIV treatment and prevention. Some of these laws criminalize behavior that doesn’t even transmit HIV, and some criminalize behavior regardless of whether or not HIV is transmitted. These types of laws can discourage HIV testing because they punish those who know their status. Additionally, several states permit sentence enhancements if certain crimes are committed by someone living with HIV, and these often result in longer sentences for people of color. Here are some questions for your state and local candidates about issues regarding HIV criminalization. 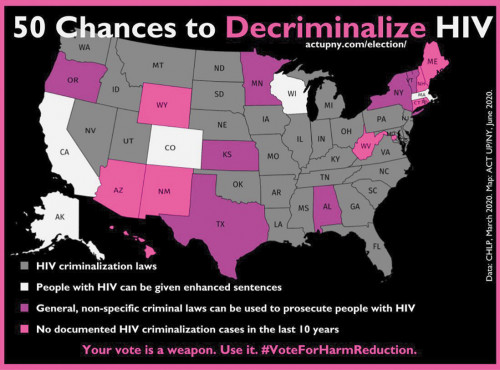 If you live in a state that criminalizes HIV (gray or white on the map), you can ask:

If you live in a state that does not specifically criminalize HIV (pink or purple on the map), you can ask:

Fortunately, even without a cure or a vaccine, we have the tools to end the HIV epidemic. We know how to prevent HIV. Practicing safer sex and not sharing equipment to inject drugs can prevent HIV transmission. U=U (Undetectable Equals Untransmittable) is shorthand for the fact that when people living with HIV are on effective treatment, they cannot transmit the virus sexually. Pre-exposure prophylaxis (PrEP) is an HIV prevention tool that enables an HIV-negative person to take antiretroviral medication to greatly reduce their risk of contracting HIV.

Unfortunately, some states have chosen not to teach this information in their schools. While other states may require that HIV is taught, they don’t require the information to be accurate or up to date. It will be difficult to end the epidemic if we don’t teach future generations how to prevent it. Here are some questions for your state and local candidates about issues regarding HIV education. 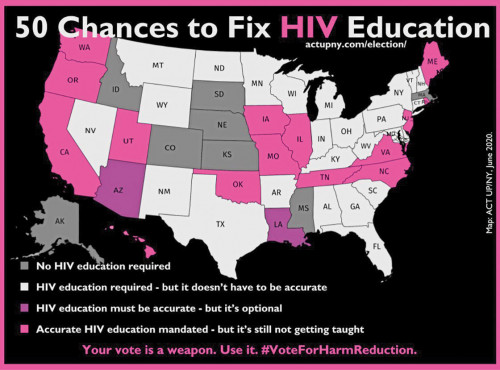 If you live in a state that does not mandate medically accurate HIV education (any color but pink on the map), you can ask:

If you live in a state that already mandates medically accurate HIV education (pink states on the map), you can ask:

Medicaid is a critical source of health care coverage for many people living with HIV. People with a low income and who are part of a “categorically eligible” group (children, parents with dependent children, pregnant women and people with disabilities) can qualify for Medicaid. Each state establishes and administers its own Medicaid program, but they are all required to cover certain mandatory benefits. In 2010, the Affordable Care Act provided states with the option of expanding Medicaid eligibility to include people below certain income levels, which enabled greater access to HIV care and treatment. Here are some questions for your state and local candidates about issues regarding Medicaid expansion. 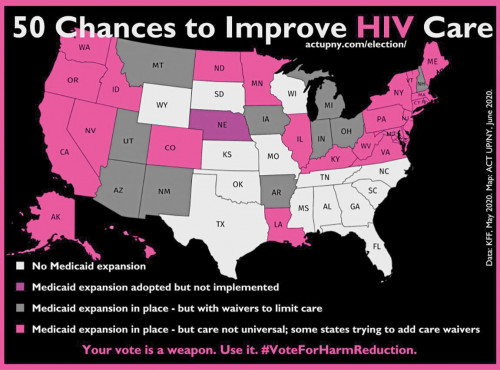 If you live in a state that has not expanded Medicaid (white on the map), you can ask:

If you live in a state that has expanded Medicaid (any other color on the map), you can ask:

Adapted with permission from ACT UP New York (actupny.com/election/)

POZ Poll: Are you registered to vote?