Elena Schwolsky’s experiences helped her heal from her own grief and taught her some important life lessons.

As an idealistic young woman in her 20s, Elena Schwolsky, RN, MPH, traveled to Cuba in 1972, where she volunteered building houses with the Venceremos Brigade.

In May 2019, she visited the island again as part of a Rainbow World Fund delegation that also included AIDS Memorial Quilt cofounder Cleve Jones. The group brought sections of the quilt to present at the Center for Sex Education in Havana, headed by Fidel Castro’s niece, Mariela Castro Espín. The trip included a visit to Los Cocos, Cuba’s largest HIV sanatorium, where members of Grupo de Prevención SIDA displayed sections of their own memorial quilt.

Schwolsky, now 74, chronicles the years in between in her new memoir, Waking in Havana: A Memoir of AIDS and Healing in Cuba. The book describes her work as a nurse at a pediatric AIDS clinic in Newark; the death of her husband, Clarence, from AIDS (she remains HIV negative); and her time working at Los Cocos in the 1990s. Throughout the book, we meet some of the Cubans living with HIV who became part of her chosen family. 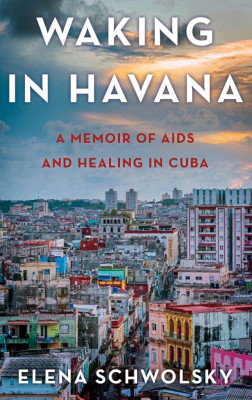 The memoir, published in November 2019, is more relevant than ever as the world grapples with questions about the balance between individual liberties and public health in the face of the COVID-19 pandemic, debating measures ranging from mandatory quarantine centers in China to stay-at-home orders and face mask requirements in the United States.

“Once again, the tug-of-war between a public health approach based on data and collective safety and those asserting their individual liberties has begun in the United States,” Schwolsky says.  “Hopefully we have learned some lessons from the past as we chart a course through this unprecedented global event.”

Unlike in the United States, the first people affected by AIDS in Cuba were considered respected members of society. “The very first people infected on the island were returning military from Angola, diplomats and artists who had traveled abroad—these were not marginalized people at all,” Schwolsky says.

Starting in 1986, Cuba implemented its controversial policy of quarantining people living with HIV in sanatoriums, starting with Los Cocos, named for its towering coconut palm trees. Eventually, there were 14 such facilities scattered across the island, three of which remain open.

When she visited Cuba as part of a Global Exchange public health delegation in 1991, Schwolsky had trouble accepting the policy of separating people with HIV from their loved ones, recalling how important the last years she shared with Clarence were to both of them. But over time, she came to understand the difficult balance between individual rights and the good of society.

“In the U.S., people described the sanatorium as a prison, but it was a comfortable residential community with a tremendous amount of support,” she says. “It made sense on two levels: to prevent a widespread epidemic and to care for people who already had HIV. I think in both those ways it was successful—Cuba has the lowest HIV prevalence rate in the Americas—but it was not without a personal toll for the people separated from their families and communities.”

As an example, Schwolsky tells the story of Alejandro, a young gay man who was chosen to study nuclear chemistry in the Soviet Union, where he took advantage of the freedom of being away from parental authority (some names in the book have been changed to protect anonymity). He tested positive for HIV when he donated blood to help victims of the Chernobyl nuclear power plant disaster. Government officials told him his father was gravely ill and put him on a flight back to Cuba. When the plane arrived in Havana, it was met by military vehicles and an ambulance. Alejandro was told he had AIDS and probably didn’t have long to live, and he was whisked off to the sanatorium.

“The approach Cuba’s public health system took to contain the AIDS epidemic seems all the more relevant now as we face a new global pandemic,” Schwolsky, who lives in New York City, reflects. “I watch as my city is devastated, and all of the fault lines and inequities in the U.S. health care system become so apparent. The late, fragmented and inadequate response of our government to this public health crisis is in sharp contrast to the immediate and coordinated response of Cuba’s public health system to COVID-19: 28,000 medical students mobilized to go door-to-door to assess 9 million of the island’s 11 million residents, with a national system for testing, contact tracing and follow-up isolation already in place.”

During the “special period” of economic deprivation after the collapse of the Soviet Union, life in the AIDS sanatoriums was not without its benefits. Residents continued to receive their old salaries and had air-conditioned housing and adequate nutrition, which was not always available outside. One man she met at Los Cocos was an “auto-injector,” part of a small group of people who injected themselves with blood from people with HIV so they could live at the sanatorium.

Policies began to change after early residents petitioned governmental officials—all the way up to Fidel Castro—saying they were not criminals and they had a right to live like human beings. People were then allowed to visit their families, at first with an escort and later alone if they were deemed trustworthy. Some began working at outside jobs. Same-sex couples—who were still socially frowned upon—could share a home, and the residents could dress as they pleased.

“There were drag shows every Friday night, transvestites could dress as they wanted, gay couples could live together and were provided housing in little apartments,” Schwolsky recalls. “They lived openly and without stigma. It was a place where people could really be themselves.”

In 1996, Schwolsky returned to Los Cocos as part of her master’s in public health fieldwork, helping Grupo de Prevención SIDA develop a training program for the country’s first AIDS peer educators. “They were already doing prevention education work at the sanatorium, but they hadn’t told their stories in communities on the outside,” she says. “They weren’t just going to be doing outreach as prevention educators, they were going to be doing outreach as themselves—as people living with HIV.”

Schwolsky arrived not long after the quarantine policy was lifted and people with HIV could choose whether to live at a sanatorium or be treated as outpatients. About 80% of current residents decided to stay, but only around 20% of newly diagnosed people opted to enter. Today, the sanatoriums house a couple of hundred people who have complex medical needs or would have trouble living outside as well as a small number deemed to be at risk of transmitting the virus. Newly diagnosed people are encouraged to stay at a sanatorium for a few months to learn how to manage their disease and prevent transmission. 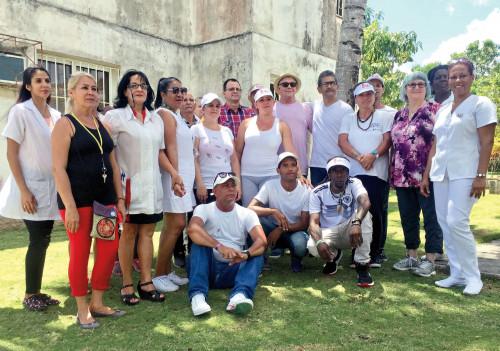 As part of the training program, Schwolsky led a workshop called “Telling Your Story,” where she told her own story of making a quilt panel for Clarence. “I passed around pictures, and the whole workshop stopped,” she recalls. “People were blown away—it just resonated immediately, and they said, ’Let’s make a panel.’”

After she left, the group kept going and created Proyecto Memorias. “They got panels from all over the island. The quilt was displayed in parks and at conferences and became a big centerpiece of their prevention work. It’s a testament to how a simple idea that grew into such an amazing emblem of struggle in the United States translated to their work there, even though there’s no Spanish word for ‘quilt.’” 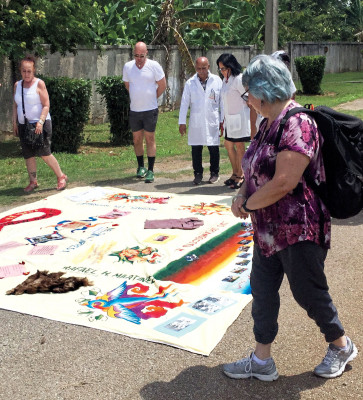 Among the members of Grupo de Prevención SIDA and Proyecto Memorias whom Schwolsky introduces in Waking in Havana, two have died and one still lives at Los Cocos, she says. Alejandro was among those who left right away; he now lives with his male partner in the house in Havana where he was born.

Another member, Hermes, now lives in the United States. He had been very ill with drug-resistant HIV and needed the best possible antiretroviral treatment. Under Cuba’s universal health system, all people living with HIV are eligible to receive free treatment, but access to the latest drugs is limited, in part by the ongoing U.S. embargo. Pre-exposure prophylaxis (PrEP) has only recently become available.

Schwolsky’s experiences in Cuba over the years both helped her to heal from her own grief around AIDS and taught her some important life lessons.

“I learned how careful, humble and sensitive one needs to be when accessing another cultural experience. I had my own feelings and opinions, but I wanted to enter with an open mind and really try to understand what was unfolding in its own context,” she says. “I also learned how powerful shared emotional experiences can be in cutting through cultural and political boundaries. There is a shared experience of stigma, loss, strength, caregiving—all of those things are universal.”