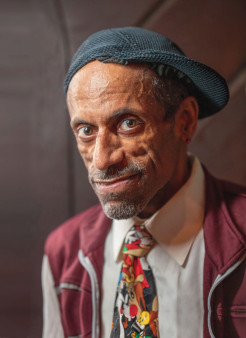 “Without unity, there is no community.”

“I always thought of New York City as a haven for me to express myself,” says artist, cartoonist, voguer, dancer and choreographer Milton Garcia Ninja, who this year was honored with a Visual AIDS Vanguard Award for his achievements as an artist living with HIV. Of all his talents and experiences, Ninja is proudest to be an Icon in the Legendary House of Ninja.

“I’ve been walking [competing] since 1984,” says the 52-year-old Ninja, of his involvement in New York City’s house and ballroom scene. “In and out of the process of discovering my sexuality and discovering my gifts and my talents, there’s no other community that I feel prouder to wear on my sleeve than ballroom.”

A self-described Nuyorican (a Puerto Rican living in New York) born in Spanish Harlem and brought up in the Bronx, Ninja grew up in a pretty stable home with his mother, a social worker; his father, a teacher; and a younger brother. “I am very grateful that I had the childhood with my parents,” he says, “but there were times when we were really butting heads about my sexuality.”

The rebellious Ninja discovered his tribe at age 14 when his search for love and acceptance outside the home led him to the piers on Manhattan’s West Side. Soon he was attending vogue balls and watching dancers compete. “I was fascinated by how they flawlessly moved and how intricately they moved to the beat of the music,” he says. Ninja studied the dancers and practiced at home in front of a mirror. At 15 or 16 years old, he found his confidence as a performer.

At 22, Ninja was diagnosed with AIDS. “I was so upset at myself and at the gay community,” he says. “There were moments that I lashed out at any gay man who was interested in me sexually, because I was angry. How could this happen? Not at the prime of my life, not when I was going to college and majoring in fashion.”

Ninja carried on. He continued to shine in the ballroom community and became involved with creative projects, discovering drawing and cartooning along the way. He inspires through his “pictorial diary” on Instagram (@mgarcianinja). “I create these colorful pieces of people whose lives touched me and whose lives I’ve touched through color and through cartoon vignettes in origami paper and various other mediums.”

In January 2022, Ninja was diagnosed with kidney failure and has been undergoing dialysis. “On top of my issues with HIV, feeling like I have that under control, comes this avalanche of new information about my kidneys and dialysis and a possible transplant,” he says. “It’s been a real juggling act these past months.”

But Ninja continues to rise to meet the challenges thrown his way and remains creative and hopeful. He is especially grateful for the support of both his biological family and his ballroom family: the House of Ninja. He says the mantra he is mastering in the course of his life is: “Without unity, there is no community.”