Do You Wanna Funk?

Songs of the early HIV epidemic

Dancing at an AIDS memorial? How could you not, when you hear upbeat anthems like “Don’t Leave Me This Way,” “You Make Me Feel (Mighty Real),” “It’s Raining Men,” “Why,” “All Around the World” and “Never Can Say Goodbye.” Spanning the 1970s and ’80s, these dance floor classics were part of the soundtrack for the generation of young adults first decimated by HIV and AIDS. The tracks are also the inspiration for Songs for a Memorial, the latest art installation and related programming—including a silent disco and storytelling event—at the New York City AIDS Memorial. 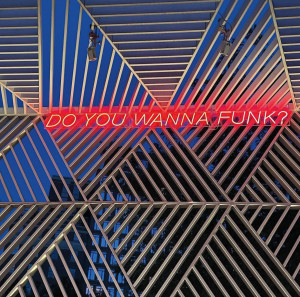 Created by artist Steven Evans, the installation consists of 12 text-based LED sculptures that spell out in neon colors the titles of songs popular at clubs in downtown New York in the years leading up to and including the early epidemic. (The first official announcement of the disease was June 5, 1981, when the Centers for Disease Control and Prevention reported five cases of a mysterious illness affecting young gay men.)

The installation, which runs through September 6, was accompanied by—what else?—a free dance party inspired by the songs and titled Dance for a Memorial. The June 29 event capped off a month of Pride. But there was a twist: This was a silent disco. Partyers wore headphones through which DJs Lady Bunny and Lina Bradford spun the hits. 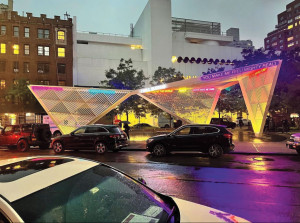 Before the beats kicked in, though, the audience got in the mood with Meet Me on the Dance Floor, an hour of storytelling presented by the Generations Project and focused on tales from the dance floor.

An AIDS Memorial press release describes Songs for a Memorial as follows: “By juxtaposing multiple song titles across genres, Evans weaves narratives of both individual and collective memory and history that simultaneously speak to complex relationships between loss, love, sadness, joy, and celebration—paradoxes that exist at the crux of his practice. As Julie Ault quoted [Dancer from the Dance author] Andrew Holleran, in her essay for Evans’s 2019 solo exhibition at the Contemporary Arts Museum Houston, ‘any memory of those days is nothing but a string of songs.’”

To learn more about the early era of AIDS and its music history, visit NYCAIDSMemorial.org, where you’ll find a Spotify playlist of 13 tracks referenced in the installation; plus, you can read an essay on the topic by Jeanne Vaccaro, a scholar of contemporary art. 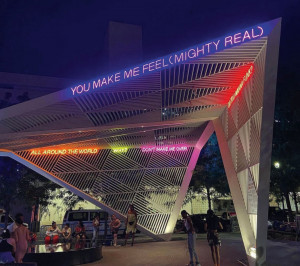 “In Songs for a Memorial, artist Steven Evans presses play on the infinite track of cultural memory as the sounds and sensations of history blink bright neon,” Vaccaro writes in the essay. “A loving and public arrangement of feelings, times and places, Songs for a Memorial explores the collision and crescendo of gay liberation, disco fever and the early years of the ongoing AIDS epidemic. Evans wrangles this unwieldy range of historical encounters and felt memories and illuminates them, expanding his longstanding practice of working with lyric as gay iconography.

“As a temporary monument, Songs for a Memorial is an enclosure open to the sky and to interpretation. It weaves language and memory, text and feeling in LED sculptures that function as ‘concrete poetry.’”