“HIV is not a crime. But in 30 states, people are being imprisoned due to their HIV status,” announces Broadway icon André De Shields at the beginning of a new 60-second TV commercial. “HIV no longer needs to be a death sentence. Proper use of modern medication gives people living with HIV the opportunity to thrive without the chance of passing it on to others.”

“These laws don’t provide equal justice or keep us safe,” adds HIV advocate Robert Suttle in the TV spot. “Instead, they reinforce an environment of fear, blame and stigmatization, encouraging those unaware of their status to avoid testing and robbing those living with HIV of their dignity to access treatment free of discrimination.”

De Shields ends the commercial on a forceful note: “Everyone deserves to be treated fairly under the law. HIV is not a crime.”

You can watch the commercial below and on ispot.tv.

The 60-second ad is an edited version of a nearly five-minute public service announcement (PSA) produced by the Elizabeth Taylor AIDS Foundation (ETAF) and the HIV Is Not a Crime initiative with a grant from pharma giant Gilead Sciences, which manufactures several blockbuster HIV medications. You can view the full PSA, which includes real-life stories of HIV criminalization, at the top of this article and on YouTube.

According to FiercePharma.com, Gilead took in $4.53 billion in 2021 for its HIV drugs, and last April, it gifted $24 million in grants to 116 organizations in 41 countries to help them fight the HIV epidemic.

The HIV Is Not a Crime movement is spearheaded by the Sero Project, a nonprofit that fights unjust HIV crime laws, along with ETAF and other advocacy groups. Last February 28 marked the launch of the annual HIV Criminalization Awareness Day (#HCAD). The date honors screen icon and AIDS advocate Elizabeth Taylor, who died on March 23, 2011, and was born on February 27, 1932.

You can learn more on HIVIsNotACrime-ETAF.org and in the video below:

HIV criminalization refers to the use of unfair laws to target people who have HIV—notably, women and African-American, Latino and LGBTQ people—and to punish them because of their HIV status, not because of their actions. Under outdated laws, people with HIV can be sentenced to prison in cases where HIV was not transmitted and their only crime was allegedly not disclosing their status.

It should be noted that repealing HIV laws does not mean that people can’t be held accountable for intentionally transmitting HIV. Other laws may apply to the situation.

Many HIV laws were passed in the early days of the epidemic, when fear and lack of scientific knowledge about the virus reigned. Fast-forward four decades, and today we know, for instance, that people with HIV who take their meds and maintain an undetectable viral load do not transmit the virus sexually, a fact referred to as Undetectable Equals Untransmittable, or U=U.

In the HIV Is Not a Crime commercial, De Shields references U=U when he says, “Proper use of modern medication gives people living with HIV the opportunity to thrive without the chance of passing it on to others.” 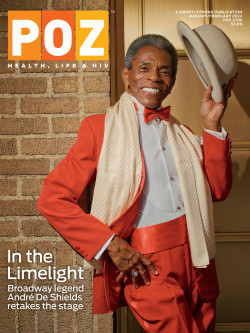 In related news, Tony Award winner De Shields graced the cover of the POZ January/February 2022 issue, as he was starring in the Broadway hit Hadestown. To read that profile, see “Inviting Death to Tea.”

And for a list of the HIV and AIDS awareness days in 2023—including a poster you can download and print—click here.