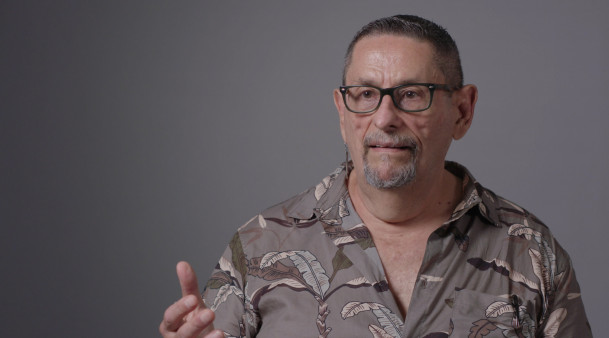 Click to watch Steed Taylor’s “I Am... a Long-Term AIDS Survivor” Courtesy of Visual AIDS/“Enduring Care”

Visual AIDS, a nonprofit that preserves the work of HIV-positive artists and uses art to fight HIV, commissioned seven artists from around the globe to create short videos on the topic of community care in the context of the HIV epidemic. Now you can watch all seven videos below (). What’s more, you’re invited to join an artist talk on Zoom at 7 p.m. ET Saturday, December 4 (RSVP here).

Titled Enduring Care, the video collection was commissioned to be part of Day With(out) Art, a series of annual events by Visual AIDS that coincide with World AIDS Day, observed each December 1.

In the Enduring Care guidebook that accompanies the videos, Visual AIDS introduces the video project:

What does it mean to endure care, and how can care be sustained through decades of crisis?

Life-saving antiretroviral medications brought fundamental changes to HIV care in 1996, but there is still no cure or vaccine for HIV. The virus can now be suppressed to the point of being undetectable and untransmittable, but living with HIV also entails adherence to a regimen of daily medication and regular doctors visits, self-advocacy in the face of bureaucracy, and dealing with stigma and misinformation. Enduring Care addresses these multiple realities, naming the perseverance of care workers and people living with HIV while also suggesting how medicine and healthcare can be painful, harmful, and difficult to access.…

In the face of neglect, abuse and pharmaceutical profiteering, Enduring Care recasts community organizing, mutual aid and solidarity as forms of medicine and care.

Below are the seven short films that make up Enduring Care, along with descriptions of each from Visual AIDS. You can also watch the videos and learn more about the artists on VisualAIDS.org.

Through a chorus of voices, Steed Taylor explores the difficulties of being a long-term AIDS survivor and the unexpected health problems facing many senior survivors.

Beto Pérez, In the Future

In the Future tells the stories of people living with HIV in Mexico who have been unable to access treatment because of government corruption and widespread theft and looting of medication.

Two fragmented interviews with artists living with HIV in Puerto Rico mediate an audiovisual invocation of the late Boricua poet Manuel Ramos Otero, who passed away from complications of the virus in 1990. Guerra sets out to translate work Manuel deemed untranslatable, investigating the ongoing passions that informed his work.

Katherine Cheairs, Voices at the Gate

Voices at the Gate juxtaposes the bucolic landscapes inhabited by women’s prisons with archival and contemporary audio recordings of poems, essays and interviews produced by women of color in the early 1990s at the intersection of incarceration and HIV/AIDS activism.

A collaborative video project made with women living in Taiwan who use their cameras to process stress and stigma and to share their experiences living with HIV.

A chronicle of Abdul-Aliy A. Muhammad’s 2017 medication strike against the Mazzoni Center, an LGBT health clinic in Philadelphia, and the direct-action campaign by the Black and Brown Workers Cooperative that preceded it.

Visual AIDS began collecting video proposals for Enduring Care in early 2020, but then COVID-19 spread across the world and a reckoning with racism shook the United States. The Visual AIDS guidebook puts that historical moment in context with the Enduring Care project:

As we collectively began to understand COVID as an ongoing, long-term reality throughout 2020, we saw people start to look to long-term survivors and AIDS activists as sources of wisdom and knowledge for surviving and enduring a pandemic. At the same time, we saw a greater focus on grassroots organizing against racist institutions, rising fascism and exploitative labor systems. Many were experiencing for the first time what structures of mutual aid could feel like, models that have long been cornerstones of Black, brown, Indigenous, queer and trans, and disabled communities.

While the videos of Enduring Care do not focus on COVID specifically, their themes resonate across both pandemics. In response to systems that seek to limit our imagination around our individual and collective power, Enduring Care emphasizes our interconnectedness and obligations to one another.

After watching the program, we ask you to consider how your political consciousness has shifted over the past year and a half. How are you aware of your interconnectedness with your community, and what does this mean for your understanding of care? What would a truly affirming system of care look like in your community?

The Visual AIDS event—originally titled Day Without Art—debuted in 1989 and invited galleries and museums to cover up artworks—or to close and send staff to volunteer at AIDS organizations. On its 10th anniversary, Day Without Art became Day With(out) Art, adding the parentheses to highlight a shift in the program to include art being created—not concealed—as a way to raise awareness about both the epidemic and artists living with the virus.

Before COVID-19 shutdowns, the videos would play at museums and venues worldwide, often accompanied by panel discussions and other events. Such events and screenings resumed this year; click here for a complete list of locations.

For a roundup of other World AIDS Day events, including a proclamation from the White House, click #World AIDS Day. And be sure to check out the Visual AIDS blog on POZ.