According to recent studies, this shift in risk is likely driven by biological, and not just behavioral,  factors.

Pregnant women experience a rise in HIV risk during their third trimester and the first six months after giving birth. According to a new study of African women, this shift in risk is likely driven by biological factors and not just behavioral factors, such as condom use patterns or sexual frequency.

Among all worldwide deaths among women of reproductive age (those 15 to 49 years old), HIV is the cause in about 12 percent of cases.

Renee Heffron, PhD, MPH, an assistant professor of global health and epidemiology at the University of Washington, presented findings from a study of 2,751 mixed-HIV-status heterosexual African couples as the 2018 Conference on Retroviruses and Opportunistic Infections (CROI) in Boston. 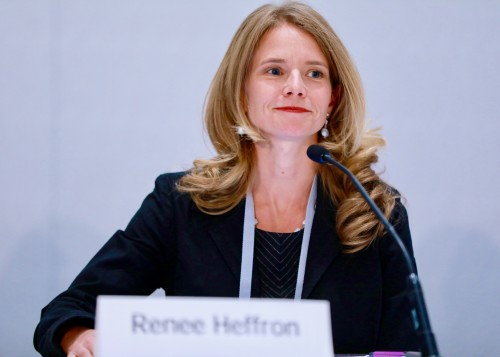 The CDC’s Renee Heffron speaks at CROI 2018 in Boston.Benjamin Ryan

The couples participated in either the Partners PrEP Study, which included 3,408 couples and ran from 2008 to 2012 in Kenya and Uganda, or the Partners in Prevention HSV/HIV Transmission Study, which included 4,747 couples and ran between 2004 and 2007 in seven sub-Saharan African nations. The men were HIV-positive and the women were HIV negative upon entering either study. The women received HIV and pregnancy testing either monthly or quarterly, depending on which study they were enrolled in. Additionally, the couples reported monthly about how frequently they had sex and whether they used condoms.

During the two studies’ cumulative follow-up period, the women experienced 686 pregnancies, for a pregnancy rate of 12.4 per 100 cumulative years of follow-up.

Eighty-two women tested positive for HIV. The study’s analysis excluded cases in which genetic testing of a woman and her male partner’s respective HIV strains indicated that they were not linked.

For their analysis, the study authors used as a reference point a 25-year-old HIV-negative non-pregnant woman not using condoms with her HIV-positive partner who had a viral load of 10,000. They estimated that the probability per 1,000 sex acts of HIV transmission was 1.05 when the women were not pregnant, 2.19 during the first 13 weeks of pregnancy, 2.97 during the last 14 weeks of pregnancy and 4.18 during the first six months postpartum.

After adjusting the data to account for differences among the women in condom use, age, use of pre-exposure prophylaxis (PrEP) and differences among the men’s viral load, they found that compared with not being pregnant, being in late pregnancy was associated with a 2.82-fold increased risk of HIV and being in the postpartum period was associated with a 3.97-fold greater risk.

The investigators believe more research is necessary to understand the apparently biological basis of such a shift in risk during the late pregnancy and postpartum periods.

“The study has important public health implications,” Heffron said. “Our data highlight the importance of counseling women on increased [HIV] risk throughout pregnancy and postpartum, promoting maternal repeat HIV testing, identifying and linking HIV-infected male partners to [ARV treatment] and care and promoting HIV prevention strategies that women can control themselves, such as oral PrEP, during pregnancy and postpartum.”