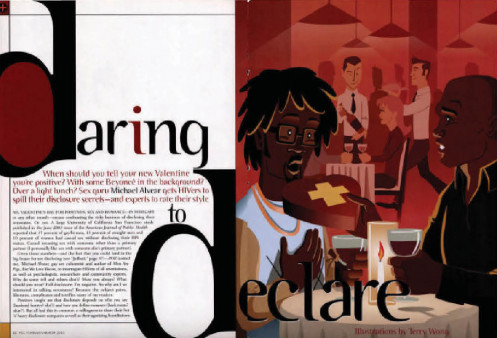 Cover: Longtime survivor Annette Lizzul gets a POZ makeover. Inside: The CDC’s “prevention for positives” campaign is shaming gay men with HIV; 10 ways to end AIDS in 10 years. Plus: HIV-positive Richard Brodsky runs the New York City marathon after being diagnosed with cancer. 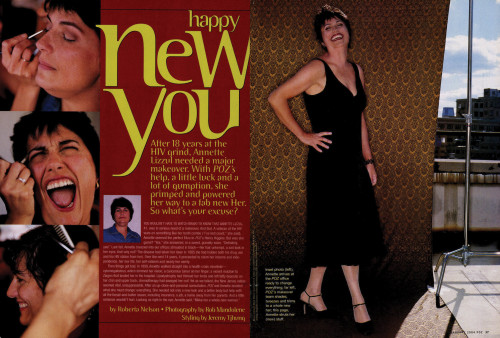 Cover: Just in time for Valentine’s Day, our sex guru gets people with HIV to spill their disclosure tips. Inside: Three treatment tricks that may go against your doctor’s orders; POZ founder Sean Strub shares how he climbed out of depression. Plus: Spill your bedroom secrets in POZ’s first-ever sex survey. 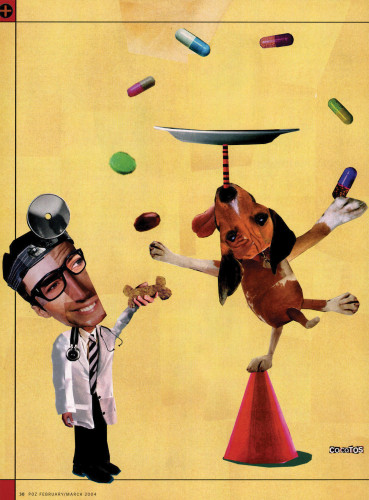 Cover: Our survival guide for inmates with HIV. Inside: What happens when holistic healers must choose between getting sick and taking the cocktail; how lies and HIV turned an internet hookup into a major courtroom drama. Plus: Queer as Folk’s writers talk about HIV’s role in season 4. 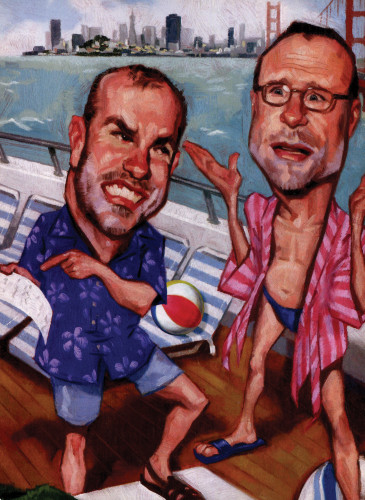 Cover: Our 10th anniversary cover installation with artist Spencer Tunick features 80 people living with HIV—baring it all! Inside: A year-by-year chronicle of the past 10 years of POZ; catching up with people who have appeared on the cover of POZ. Plus: Larry Kramer and Dawn Averitt remind us of the gift of life. 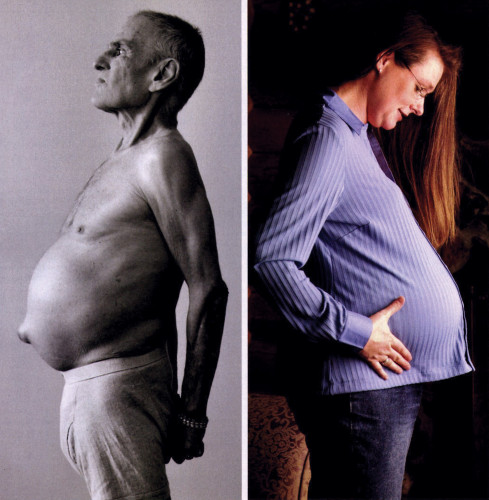 Cover: Activists get New York City to face its growing crystal meth problem. Inside: At AIDSWatch, advocates went to the Capitol to demand federal dollars for treatment; the link between HIV and domestic abuse and how to get help. Plus: AIDS Memorial Quilt founder Cleve Jones is fired from the organization that manages the 40,000- plus hand-stitched panels. 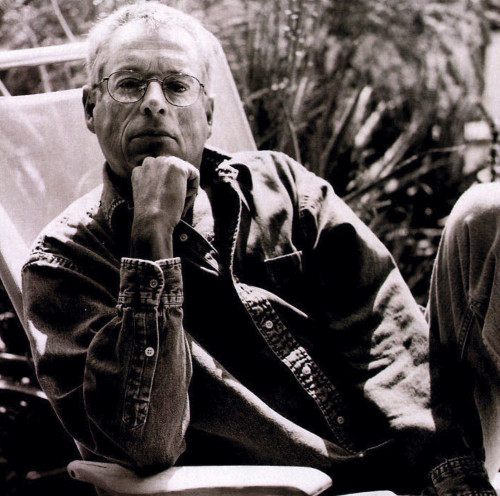 Cover: Men who have sex with men in Thailand are on the verge of an AIDS catastrophe. Inside: Residents of Broadway House in Newark produce their first-ever art show; can you forgive the person who gave you HIV? Plus: Read the results of our debut sex survey. 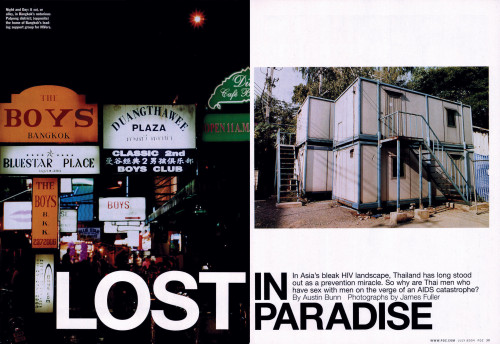 Cover: Trans people have the highest rates of HIV and the worst health care—learn how they’re fighting back. Inside: How open dialogue about HIV in Uganda led to plummeting HIV rates; New York’s Public Theater revives Larry Kramer’s The Normal Heart. Plus: A blow-by-blow from the front lines of the biggest AIDS demo in Washington, DC, in a decade. 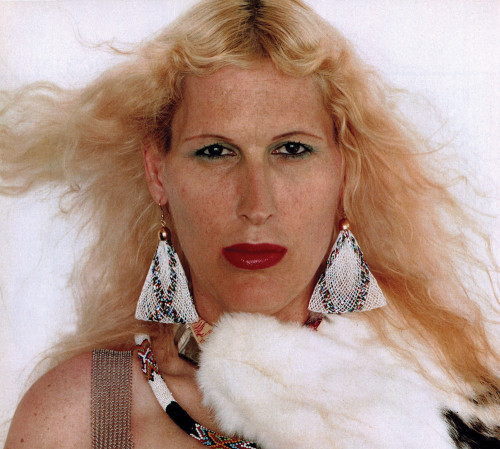 Cover: Exploring the phenomenon known as “the down low.” Inside: The AIDS Treatment Coalition is making pharma and the feds listen to your treatment needs; a step-by-step guide on how a pill gets to market. Plus: By cuddling kiddies, Alicia Keys, Oprah and other celebs are putting a human face on AIDS in Africa. 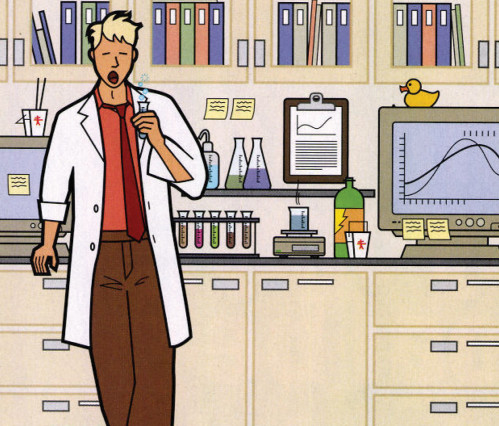 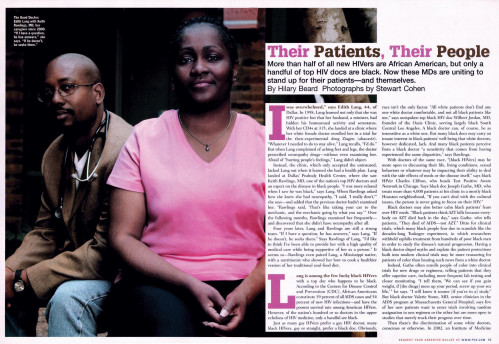 Cover: POZ’s special report on the 2004 election breaks down the issues. Inside: Shari Margolese’s son busts her for taking her “herbal” meds; Florida has a new snare tactic for sex workers living with HIV. Plus: The scoop on entry inhibitors—the next big class of HIV drugs. 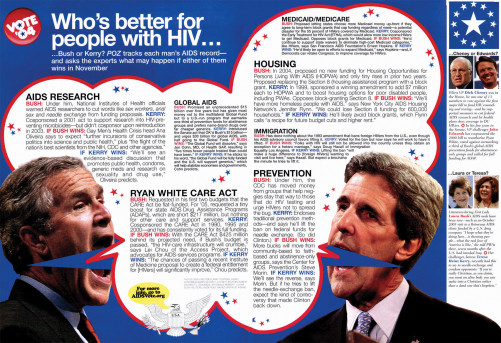 Cover: Aiming to escape side effects and preserve future options, more and more people living with HIV are daring to live with a detectable virus. Inside: To commemorate Day With(out) Art, four HIV-positive artists share work about life and love with HIv; a new exposé on the greed and corruption of big pharma. Plus: What it’s like to climb Mt. Kilimanjaro while living with HIV. 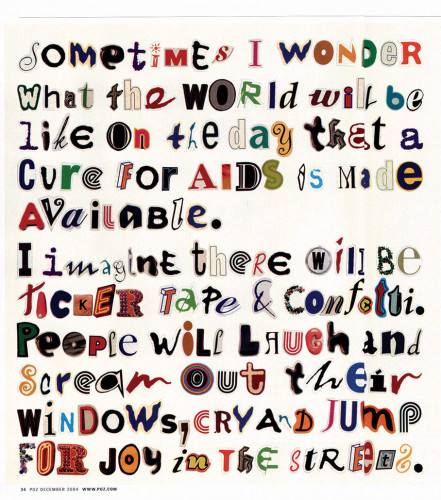