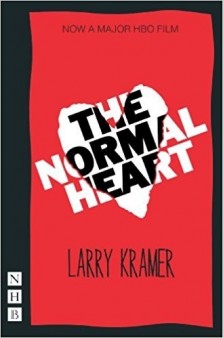 You Gotta Have Heart

Previews of the show’s Broadway debut began April 19 at the Golden Theatre, and the play opens officially April 27. Taking his first turn at directing is actor Joel Grey (Cabaret, Wicked) who played the lead role of Ned Weeks (based on Kramer himself) for part of the show’s original off-Broadway run. Leading the cast are Joe Mantello, Ellen Barkin and John Benjamin Hickey.

The original production of The Normal Heart opened at Joseph Papp’s Public Theatre in New York in April 1985 and ran for 294 performances. Frank Rich, then a theater critic at The New York Times (the newspaper is lambasted in the play for its lack of early AIDS coverage), wrote at the time: “There can be little doubt that The Normal Heart is the most outspoken play around—or that it speaks up about a subject that justifies its author’s unflagging, at times even hysterical, sense of urgency.” Brad Davis (Midnight Express), who played the role of Ned in the original 1985 production, was diagnosed with AIDS that same year.

The play also enjoyed runs in Los Angeles (starring Richard Dreyfuss) and London (starring first Martin Sheen, then Tom Hulce, then John Shea) as well as a 2004 revival at The Public (starring Raul Esparza) in addition to countless stagings at local theater companies across the globe. The film rights are currently optioned by the producers of Glee, with Mark Ruffalo slated to star.

Twenty-six years after its first production and 30 years since the first reported cases of what we now know to be AIDS, The Normal Heart is every bit as forceful, insightful and wrenchingly true as it was when it first hit the stage. Three decades into the HIV epidemic, we are not nearly far enough from where we were in the earliest days. And Kramer’s timeless work seems all the more powerfully prescient in its modern iteration.

POZ’s editor-in-chief Regan Hofmann caught up with Larry Kramer last week at his apartment overlooking Washington Square Park. She spoke with Kramer—one of the founders of GMHC and ACT UP, as well as an established author (Faggots) and Oscar-nominated screenwriter (Women in Love)—about this much-anticipated debut on the Great White Way.