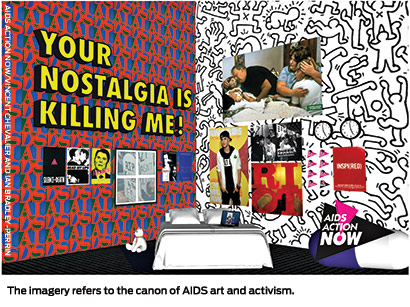 When Vincent Chevalier and Ian Bradley-Perrin decided to collaborate on a poster for the direct-action arts project “poster/VIRUS”—part of Canada’s AIDS Action Now—they built upon the provocative phrase “Your Nostalgia Is Killing Me.” Their resulting poster depicts the bedroom of a teenager obsessed with AIDS. The artists found all the source materials online—including the laptop image of Gaetan Dugas, a.k.a. Patient Zero—and they used drafting program Google SketchUp, which was important, Chevalier says, “because the Internet and its viral character contributed to AIDS nostalgia. Everything is accessible without any context, and without that context, awareness just becomes empty. Our ’90s teenage bedroom is an ahistorical K-hole.”

The imagery in the poster refers to the developing canon of both AIDS art and the history of AIDS activism—and to what gets left out of this canon. “The response has been mixed,” Bradley-Perrin says. “For younger people, there’s an uneasiness to living in the shadow of such a huge legacy of political action. That being said, many people took a statement about the politics of history as an attack on personal memory.”

“Where I notice a type of nostalgia,” Chevalier says, “is from young artists recycling the same representational strategies. I mean, how may condom dresses have we all seen? We all know AIDS constantly evolves, yet our cultural response seems to be stuck on auto-repeat.”

Adds Bradley-Perrin: “The poster is a call for a conversation that needs to be had, rather than a reference to something that’s already being discussed in the community.”