The widespread availability of antiretroviral therapy has made the fight against HIV a great deal easier. But these medications can’t go the distance alone. Working closely with your doctor, you’ll need to choose and monitor your treatment carefully. This is because of obstacles that can arise before and during treatment—one of the most important is HIV drug resistance.

What is HIV drug resistance?
In simple terms, drug resistance refers to the ability of disease-causing germs—such as bacteria and viruses—to continue multiplying despite the presence of drugs that usually kill them.

With HIV, drug resistance is caused by changes (mutations) in the virus’s genetic structure. These mutations can lead to changes in certain proteins, most commonly enzymes, which help HIV reproduce (replicate).

Mutations are very common in HIV. This is because HIV replicates at an extremely rapid rate and does not contain the proteins needed to correct the mistakes it makes during copying.

Mutations occur randomly, on a daily basis, but many are harmless. In fact, most mutations actually put HIV at a disadvantage—they reduce the virus’s “fitness” and slow its ability to infect CD4 cells in the body. However, a number of mutations can actually give HIV a survival advantage when HIV medications are used, because these mutations can block drugs from working against the HIV enzymes they are designed to target. These are the mutations we are concerned about when we talk about drug resistance.

HIV relies on many enzymes to replicate inside a human cell. It also relies on proteins, including gp41, to latch on to CD4 cells and infect them. Mutations can occur in any of these parts of the virus and cause drug resistance:

How does it occur?
HIV drug-resistance mutations can occur both before and during HIV treatment. Here’s how it happens:

A major concern with these mutations is that they can result in cross-resistance. This means that HIV resistance to one drug can automatically become resistant to other drugs in the same class. For example, if you’re on a drug regimen that contains the NNRTI Sustiva and your virus becomes resistant to it, chances are that your virus is also resistant to the NNRTIs Viramune and Rescriptor, even though you haven’t taken these drugs.

What factors contribute to resistance during treatment?
If there’s one “golden rule” of antiretroviral therapy, it is: the lower the viral load while on treatment, the less likely it is that the virus will continue reproducing and mutating. A powerful HIV regimen is the most effective way to keep the level of virus low—preferably undetectable— and to delay additional mutations from occurring.

Unfortunately, there are a number of factors that can prevent an HIV drug regimen from being as powerful as it can be. These include:

While viral load can help you determine if your drug regimen isn’t working effectively, it cannot explain why this is happening. This is where drug-resistance testing comes in. These tests can help you and your doctor determine if your virus has become resistant to the medications you’re taking—or if you haven’t yet started treatment yet, help figure out if you were infected with a drug-resistant strain of HIV that might affect your selection of medications.

When should I get a drug-resistance test?
HIV treatment guidelines, including those produced by the U.S. Department of Health and Human Services (DHHS) and the International AIDS Society-USA (IAS-USA), recommend drug-resistance testing for all HIV-positive people. Here’s a look at when these tests should be used:

What is genotypic gesting?
These tests examine the actual genetic structure—or genotype—of HIV taken from a person (a standard blood sample is all that is required). The HIV is examined for the presence of specific genetic mutations that are known to cause resistance to certain drugs.

An example: Researchers know that the NRTIs Epivir and Emtriva are not effective against forms of HIV that contain the mutation “M184V” in its reverse transcriptase gene. If a genotypic resistance test discovers a mutation at position M184V, chances are that the person’s HIV is resistant to Epivir and Emtriva and is not likely to respond to either of these drugs.

For many drugs, including the protease inhibitors and other NRTIs, complex patterns of mutations are required for resistance to occur. In this way, interpreting the results of genotypic testing can be tricky, given that different mutations—and different combinations of mutations, especially in HIV-positive people with a lot of treatment experience—can mean different things. However, as knowledge of mutations and their different patterns has grown considerably over the past several years, laboratories are able to provide accurate and useful information to physicians.

To learn more about the specific mutations and genotyping, we recommend Stanford University’s HIV Drug Resistance Database web site. They maintain detailed lists of the various mutations associated with resistance to each of the approved antiretrovirals, along with an interactive tool that you and your doctor can use to double-check your genotypic testing results.

What is phenotypic resistance testing?
Unlike genotypic testing, which looks for particular genetic mutations that cause drug resistance, phenotypic testing directly measures the behavior—or phenotype—of a person’s HIV in response to particular antiretrovirals. Because of the way phenotypic tests work and the results they provide, many experts believe that these tests are more comprehensive and trustworthy than genotypic tests, especially when testing samples from people who have tried and failed a number of HIV drugs in the past.

Using the simplest terms, phenotypic testing is performed by placing samples of a person’s HIV in test tubes with each HIV drug to observe how the virus reacts. The ability of the virus to grow (or not grow) in the presence of each drug is evaluated. The virus is exposed to varying strengths, or concentrations, of each drug. The ability of the person’s virus to grow in the presence of the drugs is compared with some wild-type virus that is known to be 100 percent susceptible to all HIV drugs. The comparison between the person’s virus and the wild-type virus provides the phenotyping results.

These results tell doctors how much of a particular drug is needed to reduce HIV replication. In other words, the laboratory conducting a phenotypic test is trying to determine the amount, or concentration, of drug needed to stop HIV from reproducing.

When phenotypic tests first became available, interpreting these fold changes was difficult. It wasn’t clear what a fold change meant in terms of the virus being fully sensitive, less sensitive, or not sensitive to a specific HIV drug. As a result, companies conducting phenotypic tests began working closely with researchers to better understand fold changes and what they really mean in terms of resistance to available medications. After several years of extensive research, these companies have developed “clinical cutoffs”—an important component of phenotypic testing that allows for much easier interpretation of fold changes as they relate to the sensitivity of HIV to many of the available medications.

As for fold changes that fall between the lower and upper cutoffs, this means partial resistance (the higher the fold change, the less sensitive HIV is to the drug being used). While it is always best to use antiretrovirals that your virus is fully sensitive to, it is sometimes necessary to use (or reuse) medications your HIV is partially resistant to.

Each HIV drug has different clinical cutoffs, which can be confusing. To help make sense of these cutoffs and to make it easier for health care providers to interpret the results, laboratories conducting these tests provide detailed reports for every test conducted.

Another test is Virco Lab’s vircoTYPE HIV-1 assay. This is actually a “predictive” phenotypic test, using genotypic testing results to figure out what the virus’s phenotype is, without actually performing a phenotypic test. To do this, labs use genotyping testing to determine if an HIV sample has mutations known to cause drug resistance. Once the genotype has been determined, the laboratory searches a database maintained by Virco containing the genotypes of several thousand HIV samples collected from other people. It then retrieves the phenotypes—the fold changes—that correspond to these samples, averages the information together and predicts the drugs that the current sample will be more or less sensitive to.

Here’s what a PhenoSense drug resistance test looks like: 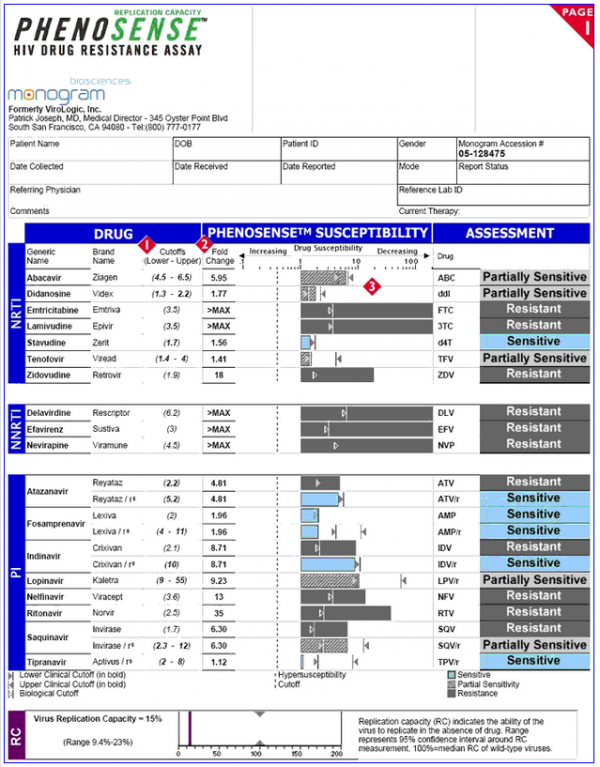 How can drug resistance be avoided?
There are a number of steps that HIV-positive people can take to prevent—or at least slow down—the development of resistance: