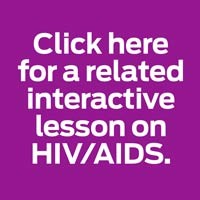 There are several ways this can happen:

In the United States, sexual contact is the most common way that HIV is passed from person to person. Sex allows for the exchange of certain body fluids that have consistently been found to transmit HIV: blood, semen, rectal and vaginal secretions. HIV has also been found in extremely low, non-infectious amounts in other fluids (saliva, tears and urine); but no transmissions through these fluids have been reported to the CDC.

According to the Centers for Disease Control and Prevention (CDC) the largest number of new diagnoses in the United States were among men who have sex with men (MSM), which includes gay and bisexual men as well as men who do not necessarily identify themselves in that way. Blacks and Latinos are disproportionately affected by HIV compared to other racial and ethnic groups. Transgender women who have sex with men have the highest risk for HIV infection. People who inject drugs are also at significant risk for getting HIV.

Sexual Transmission of HIV: What Are the Risks?

Studies repeatedly show that certain sexual practices are associated with a higher risk of HIV transmission than others. However, other very recent studies (HPTN 052, PARTNER, Opposites Attract) show that when a person living with HIV is on treatment and undetectable for at least six months, there is effectively no risk for them to pass the virus. The situations discussed below assume that the person living with HIV is not undetectable.

There are a few reasons for this. First, there are more cisgender men than cisgender women living with HIV in the United States. Second, cisgender women and trans MSM have a much larger surface area of mucosal tissue—the lining of both the vagina and cervix can chafe easily and is rich in immune cells that can be infected by HIV. For cisgender men, HIV must enter through a cut or abrasion on the penis or through the lining of the foreskin or urethra at the tip of the penis.

Research suggests that men who are uncircumcised have a higher risk of contracting as well as passing the virus if they are already HIV positive. Although adult male circumcision programs have dramatically lowered new infections, it is important to remember that circumcised men can still contract or transmit the virus.

However, HIV transmission through sharing sex toys is possible and one documented case from the late 1980s occurred between two mixed-status, cisgender women. When sharing sex toys, use separate toys or wash thoroughly before using on a second person.