New Global HIV Targets: Why You Should Give a Damn

Why We Should Care

It’s tempting to think that setting HIV goals for cities and governments to aim for, such as the 90-90-90 targets, doesn’t have much to do with people living with HIV. If you are like me, though, you’ll likely disagree. Each 90, after all, does reference us. The targets aim to see 90% of those living with HIV diagnosed, and of that number 90% on treatment, and of that number, 90% virally suppressed. That last one, by the way, is me and more likely than not, you too.

How are we doing? Globally, we rate an estimated 86-81-91 by that “triple 90” measure. Doesn’t sound too bad. But do the math another way—the percentage of the entire HIV population that is virally supressed—and you will find that those who can say “I’m undetectable” represent only 59% of those living with HIV. That compares with a UNAIDS target of 73%. In other words, we need to see “could do better” on our collective report card. Much better, in fact. Viral suppression is vitally important, not only to ensure our health and longevity, but to free us of the fear of transmitting HIV to others. That’s what U=U is all about.

Further, some are arguing that a 90-90-90 measure of success was never enough, that it’s too centred on medical interventions geared toward viral suppression, and that the success of HIV treatment, good as it is, doesn’t reflect the reality of living with HIV, which can be hard and is full of inequities.

90-90-90 is not patient-centered; it’s too focused on pharmaceuticals and not reflective of quality of life, critics say. In response, advocates around the world have been examining the concept of a “fourth 90,” but not to dilute the message behind U=U, rather to complement it. I wrote about that quest here. 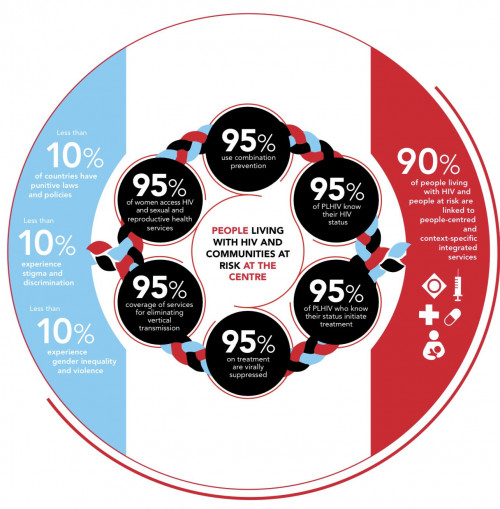 The targets now proposed by UNAIDS are more complex than we have seen in the past. We will see how much traction they gain nationally because of that — and how much traction with people living with HIV. There is no name for the new targets, but perhaps “the Six 95s” may stick, or 95-95-95? Of note, though, is that the new targets place people living with HIV and communities at risk in the center of the goals. Can’t argue with that, although sharing the spotlight with another very different demographic—the HIV-negative—seems at first glance a bit forced.

But here’s the thing. To end the epidemic, much focus needs to be directed toward prevention, i.e. to those NOT infected. Yet four of the six new 95% targets (see the schematic above) relate to those living with HIV and only two that are not. But then there is a side target (90% of people at risk are linked to “people-centred and context-specific integrated services”). That’s a necessary nod to prevention work. Not perhaps ideal, but an improvement; 90-90-90 gave scarcely a nod to prevention work directed at the HIV-negative, despite it being essential work.

But then we have three completely new targets—the report calls them “ambitious” (they are):

Is it possible that by 2030 stigma and discrimination will have all but disappeared? I doubt it. But then targets are, by their very nature, aspirational. There is no better aspirational target than wrestling HIV stigma to the ground.

A close read of this report reveals some major truths, though. “The global HIV response was off track even before the COVID-19 pandemic, but the collision of COVID-19 and HIV has set it back further” it says. “To get the global response back on track will require putting people first and tackling the inequalities on which epidemics thrive. The HIV response is fundamentally about inequality—to end AIDS, we must end inequality.” That’s the reality, the focus of where AIDS work must head. If your AIDS service organization isn’t going there, its work is not contributing to ending the epidemic. Simple as that.

That’s a clue to the prospective role of people living with HIV in all this. We must challenge.

The Role of People Living With HIV

Is all this talk of targets too dry, though, too removed from everyday life to resonate with people living with HIV? Possibly. Relatively few people living with HIV likely have an interest in a global perspective of the epidemic — including 90-90-90. And that’s OK. Coping with HIV can be a full-time job. But GIPA (the greater involvement of people living with HIV) dictates that we as a group be included at the table in all decision making. We aspire to be full participants — in everything that affects us. That doesn’t work for everybody. It would stretch us very thin, for one. But at the very least, we can challenge.

An overarching theme I think we can all get behind is accountability. I’m talking about accountability at all levels of the epidemic. Ask yourself how accountable are your service providers to you? How accountable is your doctor, your AIDS service organization, the national organizations that represent us, the government? These are questions we as people living with HIV must, I think, always be asking.

As a community of people living with HIV that wants to see an end to the epidemic, we have good reasons to get behind targets like the ones discussed here. Ditto if we want to see a vaccine (yes the UNAIDS report addresses that “We must ensure that these new vaccines are not the privilege of the rich. That is why UNAIDS and partners are calling for a People’s Vaccine—one that everyone can access, wherever they live, free of charge.”) There are also targets addressing elimination of criminalization of HIV non-disclosure, of ending stigma, of course, and of ending gender inequities and violence. In other words, there is a lot for people living with HIV to get behind here.

One word of caution, though. Because the UNAIDS report is global in nature, it may not serve as an exact blueprint for action in every country, every jurisdiction. In Canada, for example, the epidemic remains primarily one that has impacted gay and bisexual men who have sex with men. That’s a trend not played out globally. And in Canada our new infections are drifting upward, where globally the trend is the reverse, or plateauing as in the United States. Thus different nations will have different priorities within any new framework of global targets.

Bottom line is that global targets may sound esoteric, but they aren’t. It pays to become familiar with them, to challenge our leaders to go the extra mile in ending the epidemic, to meet their targets. That work may sound daunting — but it can’t proceed without us.