Jesus-f’ing-Christ, I’m turning SIXTY this week! And since I can’t enjoy a big party, the best present I could get would be a successful fundraising campaign for PrEP4All, a group I helped co-found with a bunch of whip-smart millennials in 2018. P4A recently incorporated as a stand-alone not-for-profit, and I’m honored to be on its newly formed Board of Directors (as its first Secretary!). We’re still waiting on our 501(c)(3) status from the IRS, so donations go to our fiscal sponsor (and most frequent coalition partner), TAG, the Treatment Action Group.

P4A has already made huge waves in HIV prevention, convincing HHS to defend the CDC’s patents on PrEP (the first time our government has challenged big pharma in this way). United States vs. Gilead could bring billions of dollars towards the fight to end AIDS in this country. And now, for the first time, we’ve got allies within the CDC (Drs. Walensky, the next director, and Daskalakis have worked with us from day one). We have a real shot of dramatically lowering HIV infections with this Biden team, and P4A will be in the policy driver’s seat, rest assured. 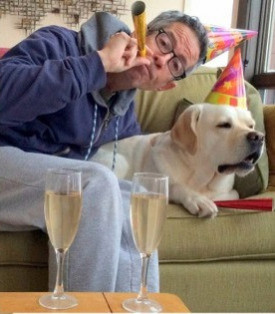 So let’s do this! Let’s raise $10K to get our Biden plans rolling, and turn my 60th into a promising launch for this new year.

NOTE: Facebook pays all the processing fees for you, so 100% of your donation goes directly to PrEP4ALL (via TAG).