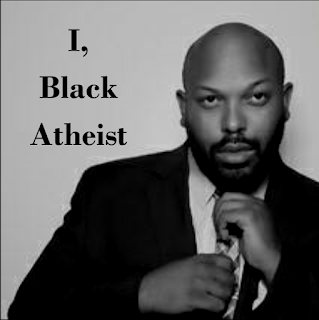 I, Black Atheist, proclaim that G-d does not exist to me and never has. You read that right, and I make no apologies to those who may be offended. The idea of a ’higher power" causes me just as much cognitive dissonance as a believer who might be reading my words regarding what they believe in. I do not live to disavow or disprove the existence of G-d, I simply do not care to attack one’s beliefs and I, Black Atheist demand that you not question my existence or my humanity. I most definitely see religion and deity as separate, and in my view religion is a means of social control and domination for those who are in control of governments and other institutions that are used to govern the masses.

The truth is that I have to be harder and more expressive because of a myth that persists within the Atheist and Black communities. The myth is that Black Atheists represent a small, but growing segment of American atheist movement. The truth is that Blacks, we hide our status as Atheist, we attend churches, mosques, synagogues, and other various places of worship. We are often exposed to the constant barrage of G-d talk on in all mediums of daily life, on a level that anything other than being Christian is bad.

“We are forced fed to believe in God even if some of us know in our hearts that Christianity is not what we truly believe in.” - Ashton P. Woods

Society at large is problematic when it comes to religious privilege of various kinds. Therefore, a closet exists, a closet where Black Atheists dwell until they have the capacity and strength to stand their ground. I, Black Atheist will continue to speak out for those very reasons, until the closet is destroyed, until we get to a place where we don’t have worry about someone flexing their religious privilege. Where responding with chastisement about how THEIR G-d is the real deal and that we need to accept said G-d for our very survival will be frowned upon. When the time comes, we will no longer stand for being forced into a prayer circle or saying grace at a dinner. Mark my words, a time will come when religious privilege will cease to exist.

Atheism - is the rejection of belief in the existence of deities.In a narrower sense, atheism is specifically the position that there are no deities.Most inclusively, atheism is the absence of belief that any deities exist. Atheism is contrasted with theism, which, in its most general form, is the belief that at least one deity exists.

We hide to avoid the questions of morality, we hide to avoid answering the questions about whether or not we have a moral compass. Yes, being an Atheist does bring bring about a line of questioning where folks like to challenge one on his or her morality. Do we know right from wrong? Yes, we do. we don’t need some figure to guide us down a path of righteousness. Let me be clear, I, Black Atheist know my know right from wrong. Doing the right thing should not come with the idea or promise of reward from some non existent being for good deeds. We are not fully comfortable with being an Atheist as a collective within the diaspora of Blackness.We are not comfortable as a collective for the reasons listed above, But I, Black Atheist am comfortable enough to do what needs to get done and say what needs to be said. I, Black Atheist am still Black and I still experience the plight that comes with the birthright of Black skin in a racist society. I, Black Atheist will speak out because WE EXIST.

Check out the Strength In Numbers blog.