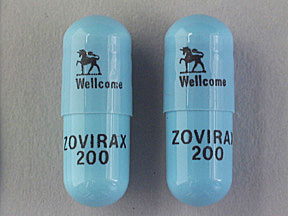 I believe I was coinfected with HIV and genital herpes in August, 1983. There was no HIV test back then (they hadn’t discovered the virus yet), and the herpes virus was the one making all the headlines and scary magazine covers. I was diagnosed with it after my first outbreak. Thankfully, a drug had come to market the year before to help treat these outbreaks. It was an ointment called Zovirax (acyclovir), and I used it often.

In January, 1985, they approved an oral version of Zovirax, and I quickly switched to that. Later that year, I was finally diagnosed as HIV positive (they only discovered the virus the year before).

I don’t remember exactly when I started taking oral acyclovir every day, but my doctor and I had heard it was being studied that way to prevent outbreaks. So sometime before the first anti-HIV drug was approved (AZT, March, 1987), I fortuitously started popping daily acyclovir. I’ve been doing so ever since.

[Coincidentally, both acyclovir and AZT were developed by Burroughs Wellcome, now called GlaxoSmithKline.]

According to an NIH study released on Wednesday, I was probably taking a drug that not only prevented herpes outbreaks, but also hindered the HIV that was battling my immune system. Acyclovir might be one of the reasons I’m alive today.

The drug acyclovir has long been used to suppress outbreaks of oral and genital herpes. Herpes viruses change acyclovir to a form that prevents them from reproducing.

Now, it appears that after acyclovir is altered by herpes viruses, it also interferes with the AIDS virus?s ability to reproduce, report researchers from the National Institutes of Health and other institutions.

The study, conducted in cultures of human lymphatic tissue, was published online in Cell Host & Microbe.

“The findings open up promising new avenues of investigation in the fight against the AIDS virus,” said Duane Alexander, M.D., director of the Eunice Kennedy Shriver National Institute of Child Health and Human Development (NICHD), the NIH institute where much of the research was conducted.

The study?s lead authors were Andrea Lisco and Christophe Vanpouille, of the NICHD. Other authors of the study were from McGill University, Montreal; the University of California, Los Angeles; Emory University School of Medicine at the Veterans Affairs Medical Center, Decatur, Ga; St. George?s University of London; Katholieke Universiteit Leuven, Belgium; Cardiff University, Wales, and the National Cancer Institute, also at the NIH.

The most well known herpes viruses, herpes simplex virus-1 and herpes simplex virus-2, cause cold sores and genital herpes, respectively. Several other herpes viruses, however, are believed to be benign and don?t cause any symptoms in adults, explained the study?s senior author, Leonid Margolis, M.D., Ph.D., head of NICHD?s Section on Intercellular Interactions. These benign viruses are so widespread that most people probably harbor one type or another and don?t realize it.

On the basis of his experiments, it?s reasonable to assume that most of these viruses have the ability to alter acyclovir so that it hinders HIV, Dr. Margolis said. Although it will take additional studies to confirm, Dr. Margolis added, the results of this study suggest that acyclovir might make a useful addition to the cocktail of drugs used to suppress HIV in people infected with both HIV and one of the many forms of herpes virus. Another prospect for future research would be to chemically modify acyclovir in the same way that herpes viruses do, an avenue which is currently under investigation.

The researchers began their study by culturing HIV and herpes simplex virus-2 together in tonsils removed during surgical procedures. The tonsil tissue provides an environment similar to the body and allows the viruses to reproduce much like they would during an infection.

Early studies of cell cultures failed to show that acyclovir had any effect on HIV, Dr. Margolis said. Yet other studies had shown reductions in HIV levels when people with both HIV and herpes simplex virus-2 (HSV-2) were treated with acyclovir.

When the researchers added acyclovir to the cultures, the levels of both HIV and HSV-2 fell. Next, the researchers grew HIV in tonsil cultures that were not infected with HSV-2. Surprisingly, when they added acyclovir to the HSV-2 free cultures, the levels of HIV in these cultures also dropped. But testing revealed that although the tonsil tissue cultures were free of HSV-2, they had been infected with other kinds of herpes viruses, presumably long before the tonsils were removed surgically.

The experiments with tonsil tissue strongly suggested that the phosphorylated form of acyclovir also hindered the reproduction of HIV, the study authors wrote.

Have You Tested Positive Yet? For What?