Adam M. Geary: ’Anti-Black racism has been central to the structuring of HIV vulnerability in the U.S. and globally.’ 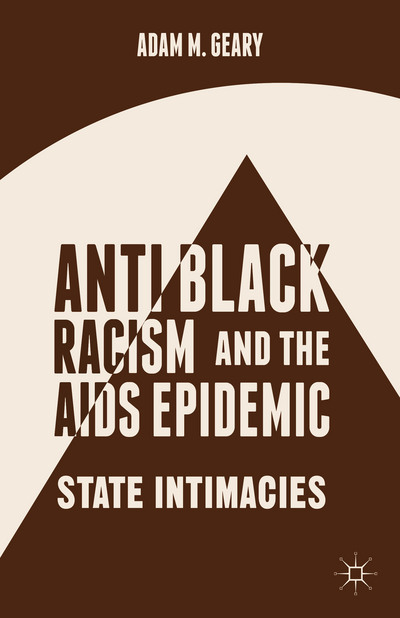 Early in the epidemic, theorist Cindy Patton coined the term queer intimacies, suggesting HIV/AIDS situates those living with, at most risk, and most impacted by HIV in the realm of the queer, the different, those who must be managed. In his new book, Antiblack Racism and the AIDS Epidemic: State Intimacies, Adam M. Geary works to flip the script, arguing that within HIV movements we need to focus on the state and the role it plays in reducing life chances for those most impacted, leading with the fact the state is rooted in antiblack racism.

Geary is part of a long legacy of thinkers who work to expose ways in which violent systems govern our lives. In the interview below with Ted Kerr, he discusses his influences, the book, and ways in which we can understand homophobia as fueling current HIV prevention methods.

To purchase a copy of Antiblack Racism and the AIDS Epidemic: State Intimacies, click here.

Can you tell us a bit about what led you to write the book? Your life before you wrote it? Your influences?
The route to a book, or any significant intellectual project, is always somewhat circuitous. Or at least, it is for me. So there are a number of leads into this book, not all of which were clear to me at the time. But looking back, I can say that this book emerged out of a sense of exhaustion with AIDS prevention as it has been organized: politically, theoretically, emotionally, technically. And then the guilt and shame around that. We’re all supposed to be eager practitioners of risk reduction protocols, and as a gay man who came of age in the AIDS era, I’ve been bombarded with all of that. And let’s just say that I’m exhausted by it. So when I began thinking about a dissertation--I pursued my doctorate in the history of consciousness at the University of California at Santa Cruz in the late 1990s and early 2000s--I decided that I wanted to think through this behemoth called “AIDS prevention”: what it is as a project of intervening in a viral epidemic. Part of that--though something that didn’t really enter the dissertation per se--was also: Why does it feel so lousy to those of us targeted by it, or at least to me?

What I came to understand in writing my dissertation was that AIDS prevention as it has been organized presumes to intervene in a social and environmental catastrophe through the cultivation of personal and communal responsibility, and secondarily, through massive financial transfers to pharmaceutical companies in pursuit of high-tech “cures.” Behaviors and technologies: classic neoliberalism. The burden not only of surviving but of managing or ending this epidemic has been thrown back onto the folks most affected by it, as their responsibility, including their responsibility to offer themselves up for medical experimentation. Which is to say that the AIDS epidemic has been staged as an ethical drama: Can people who’ve obviously behaved in ways that have put them at risk be lured into ethical transformation so as to behave better? (This is one of the key reasons that AIDS prevention feels so bad, I think: it’s staged as a permanent referendum on our ethics. As though “bad behaviors” has ever been a good enough explanation for a health catastrophe or as though good behavior has ever solved one.)

But once I said that AIDS prevention was organized as neoliberal governance, I was stuck. As opposed to what? What other ways might there be to do this? And I have this sense that the petering out of the AIDS cultural criticism of the 1990s is related to this: We became very good at reading the policy and discourses of AIDS critically, but the question of an alternative to them was becoming increasingly difficult to imagine. And for myself, the block to my imagination was in the science: What is an epidemic? What is a virus? When are viruses dangerous? When do viruses spread? Under what conditions? Cindy Patton’s warning that we really attend to the ways that science structures our imagination around AIDS was never more relevant than right now ... and maybe most relevant right now, when the sense of scientific certainty is nearly unbudgeable. I’m not being an HIV denialist here (as my book will attest), nor am I being anti-science. But there are traditions of health science--including Western traditions--that have been dismissed or suppressed, that tell different kinds of stories about epidemics, and that lend themselves to different kinds of politics. In my book, I focus primarily on the materialist (Marxist) traditions of social medicine, especially as they have developed historically in Black American thought. The Black health tradition demonstrates again and again that ill health, including epidemic disease, is a result of environments structured by racism and impoverishment that leave bodies vulnerable to disease. For anyone who wants a crash course in that, I strongly recommend Dorothy Roberts’s most recent book, Fatal Invention: How Science, Politics, and Big Business Re-create Race in the Twenty-First Century (The New Press, 2011).

And this leads me to the other major influence on my thinking, which is Black Studies, especially the emergent scholarship loosely organized under the label “Afropessimism.” What scholars like Jared Sexton, Hortense Spillers, Frank Wilderson, Saidiya Hartman, Kenyon Farrow, as well as those like Ruth Wilson Gilmore, Angela Davis, Fred Moten, and others not identified with Afropessimism, have helped me hold in my head is the centrality of anti-Black racism in state formation, state and structural violence, economic restructuring, and the formation of environments of embodied vulnerability to disease. It’s not simply that there is racism, but that anti-Black racism seems to be an especially deep well of social and cultural animus through which various forms of violence are legitimated and structured. And as indexed by epidemiological reports, anti-Black racism in particular has been central to the structuring of vulnerability to HIV, in the US, in the western hemisphere, and globally. It’s also, I fear, one of the key reasons why social, cultural, and even social-movement concern about the epidemic has shifted so dramatically in the last decade, if not dissipated altogether.

A lot of work around HIV/AIDS in the U.S. is rooted in assumptions and conversations around gay male sexuality, and while that is part of your book, it is not a foundation per se. How has this been received? Have people noticed?
One of the things in the book that I don’t say quite as clearly as I would have liked is that the form that concern with gay men takes in dominant discussions of AIDS that you rightly notice--in the U.S. and beyond--is homophobic. This is the lesson I draw from the long arch of Cindy Patton’s public and professionally academic scholarship about AIDS. When in the mid-1980s she coined the term “queer paradigm” to describe the form of concern through which risk was being described, it seems to me that Cindy was teaching us that the figure of the gay man was being offered up as the truth of AIDS, but in the most homophobic way: as someone whose illness results from his willfully perverse actions. And this hasn’t gone away, though it has morphed to accommodate different kinds of “queers.” Witness the current jargon on “hard-to-reach populations.”

The results of this homophobic attention have been profoundly damaging, but two issues seem especially important here. On the one hand, as I demonstrate in my book, the hyper-inflated, homophobic attention to gay men has crowded out other ways of attending to risk and vulnerability to HIV. Talking about gay men and other queers (homophobicly) has been a way of NOT talking about the structured inequality and violence that have made some bodies susceptible to viral infection: things like ghettoization, environmental toxicity, endemic untreated infections, lack of access to primary healthcare, mass incarceration, and other forms of state and social violence.

On the other hand--and to me this is an equally unfortunate thing--some gay men have come to identify with this inflated attention generated by the AIDS crisis, even if they contest the details: what Dennis Altman has called “legitimation through disaster.” Homophobic concern seems to feel better than no concern at all. I get that, but it’s also misplaced and has been terribly damaging. Both because it has blocked efforts to think carefully about the organization of embodied vulnerability to disease and our different and complex relationships to that organization, and because it’s interrupted or unraveled the kinds of solidarities that need to happen to transform a world in which suffering and death are distributed in these ways. Indeed, we’ve seen who can be legitimated through disaster (primarily middle-class, gay, white men) and the costs paid for that legitimation (including but not limited to a homonormative politics of respectability). That’s simply not good enough.

So I made a conscious decision in writing my book to maintain a studied distance from talking too much about gay men given that the construction of “gay men” in AIDS talk is so inflated and homophobic. “Gay men” as an identity category does too much work to contain knowledge about HIV risks within a phobic attention to individual behaviors (and “men who have sex with men” is no improvement whatsoever). Whenever the category “gay, bi, and other men who have sex with men” gets invoked in AIDS talk, we’re immediately in the realm of thinking about (irresponsible) butt sex, which is so reductive. Butt sex isn’t the problem. The problem is a world organized to make some people vulnerable to ill health and other forms of suffering for the benefit of other people. For gay men, the question then becomes how are we differently structured into that world, and how do we work with others to transform it?


Adam M. Geary is an associate professor of gender and women’s studies at the University of Arizona, and an affiliate of the university’s Institute for LGBT Studies. His research brings AIDS studies into critical conversations with black studies, Foucauldian studies, and queer studies. Geary received his PhD in the history of consciousness from the University of California, Santa Cruz, in 2004.