This is a guest blog by Gina Brown, RSW, and Davina Conner. Gina works as a regional organizer with the Southern AIDS Coalition, and Davina (Dee) works as the U.S. Creative Engagements and Outreach Specialist for Prevention Access Campaign.

We would like to address women, girls, and HIV. While we know that there are 1.1 million people who live with HIV in the United States, did you know that 1 in 4 of them are female? This means that today, 258,000 women and girls are living with HIV in the U.S. According to CDC data from 2018, 6,092 diagnoses among women were from heterosexual contact, 8 in 9 women knew they had contracted HIV, and 1 in 9 are not aware that they even had HIV. It is so important for us to educate every woman and girl on the importance of knowing their status as well as their partners. Education and awareness on HIV should be ongoing year after year and not just on Women and Girls HIV Awareness Day. Women and girls should not be left out of the HIV conversation.

HIV has changed since the 80’s, and advancements in HIV medications have allowed women to conceive children who are born HIV negative. We saw a post on social media by an amazing advocate named Masonia Trayor who said, “I believe they would have known U=U long ago if they had studied pregnant women who live with HIV/AIDS from the beginning”. Many women have known for years that we could not transmit HIV to our children but we did not know what to call it. We were only told that we were undetectable. Today it is called U=U (Undetectable equals Untransmittable) meaning if we stay adherent to our HIV medication and become virally suppressed (which means undetectable), we can conceive children without the fear of transmitting HIV to our partners and greatly reduces the risk of transmitting it to our unborn child. We can be in a loving relationship as well, and the thought of transmission to our negative partner is no longer there.

For all women and girls, prevention is key when addressing HIV. But, there are barriers that exist in many marginalized communities like the South where HIV is very prevalent. How can we tackle the high rate of HIV diagnosis in Southern states?

The first thing we have to know about the South, it is called the Bible Belt. There are more churches per capita in the South than in the rest of the country. With that sometimes comes judgment which leads to both internal and external stigma. Stigma can be debilitating, especially in women and girls. Stigma can impact decision-making, like condom negotiation.

Most Southern states do not teach Comprehensive Sexuality Education, leading to sex still being a taboo subject. If we don’t educate women and girls on body autonomy, we are missing an opportunity to also provide real prevention education. Education that could keep women and girls from acquiring HIV. Another issue that we must tackle if we are going to prevent HIV in women and girls is housing. Housing in the South is becoming really unstable for women and girls, with rents increasing and pay staying stagnant, homelessness is a real issue. The South also has a high poverty rate, according to the Louisiana Department of Health  11.67% of households in Louisiana are headed by single mothers.

Being a single parent impacts how and where a woman lives. When thinking of the Social Determinants of Health, it’s important to remember they are amplified in the South. The South also has the most states that did not expand Medicaid, making healthcare an issue. Healthcare is a huge factor for women living with HIV in the South, but it’s even bigger for women most impacted by HIV. 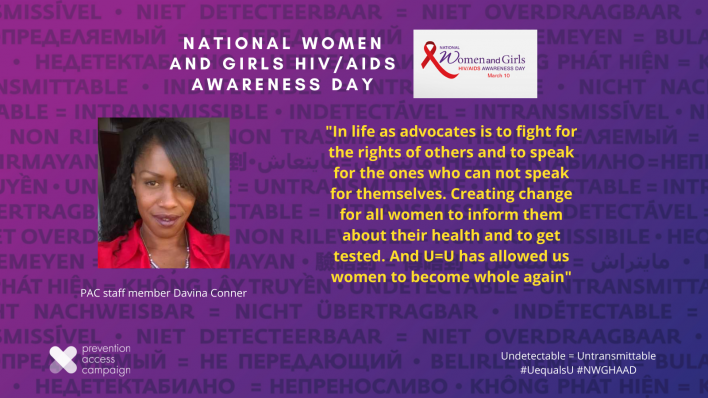 These are issues that we can and must address...that is if we really want to prevent HIV in women and girls. Housing is not only healthcare but also prevention. If a woman is homeless, she may be forced into survival sex. If she lives in an area where jobs are scarce, in order to feed her family she may be forced to stay in an unhealthy relationship.

There are so many things we can do to ensure Women and Girls are not an afterthought only mentioned on March 10th, we need a prevention response for Women and Girls every day.