AIDS WATCH: Why Is the CDC Withholding Billions in PrEP Profits?

You are going to read this story and think it is too outrageous to be true. You would be wrong. And, especially if you are an HIV advocate attending AIDS Watch in Washington, DC, this week, you must demand that our elected officials answer for it.

Here’s the story, and some simple questions for you to ask our elected officials in Washington.

Truvada is a drug that has been used for many years as a treatment for people with HIV. When the United States government researched the use of Truvada as the first drug for pre-exposure prophylaxis (PrEP), U.S. taxpayers footed the bill for that research. The clinical trials, the research and development, all of it was paid by our government. We, as U.S. citizens, were the investors. Gilead, the pharma that makes Truvada, did not spend any money on the research and development of ‘Truvada as PrEP.’

So, when Truvada proved successful in preventing HIV infection, the patent for the use of Truvada as PrEP became the property of the government, not Gilead. The Centers for Disease Control and Prevention (CDC) owns the patent on Truvada as PrEP.  Our tax dollars paid for it.

That means that every time Gilead sells a Truvada pill to be used as PrEP, the CDC can legally collect a royalty on that sale. Considering Gilead typically charges over $2,000 per month for the drug and it costs them less than six bucks to manufacture it, that’s a pretty sweet profit margin.

Do you have any idea how much money Gilead makes from selling Truvada each year? Try three billion dollars. Now, how much in royalties do you suppose the CDC demands from Gilead for selling Truvada as PrEP?

When The Washington Post ran a front-page article on this story last week, you would be forgiven if you got a little lost in the wonky details. I did. And the very idea that the CDC would give Gilead a pass on PrEP royalties – money that would dwarf the entire proposed federal budget to “End the Epidemic” – well, it sounds crazy. It’s not. 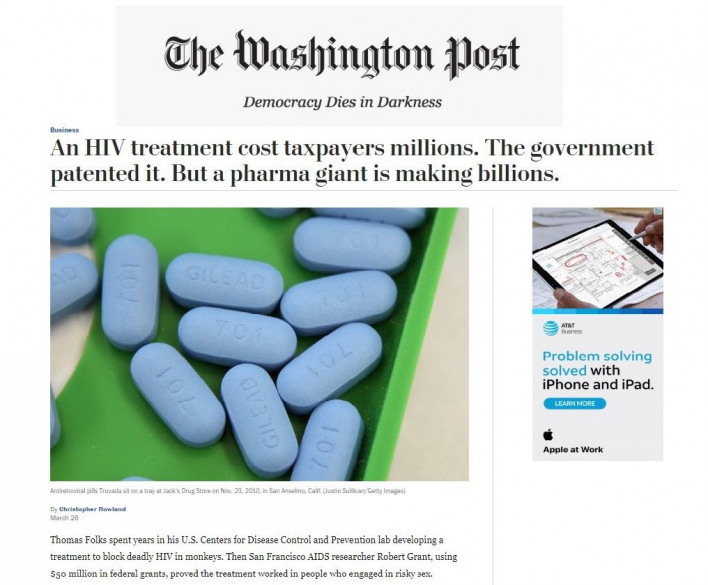 “When we came across this information last August, we couldn’t believe it ourselves,” James Krellenstein told me. James is part of a HIV treatment and prevention advocacy group, The #PrEPforAll Collaboration (Prep4All.org), and they are behind the #BreakthePatent campaign. The group has been working behind the scenes for months making sure they had their facts straight. Their research was enough for The Washington Post to run their front-page story — and it should be enough for you to demand answers right this freaking minute.

“We had a team at Yale Law School examine the patents,” James explained to me (you can read Yale Law School’s own press release about the scandal here). “This is real. The CDC owns these patents and they could demand tomorrow that Gilead retroactively pay royalties to the government, money that could be used to fund a national PrEP program. These royalties are ours, as U.S. taxpayers. And, as the patent owner, the CDC could also demand that Gilead reduce the price of the drug.”

The #PrEPforAll team described meetings to me in which CDC officials lied to their faces, claiming the patent did not belong to the CDC or tried to confuse the issue with bureaucratic nonsense. But none other than Dr. Anthony Fauci, Director of NIAID, confirmed to them that yes, the CDC owns the patent on Truvada as PrEP, and it is valid and enforceable. Fauci directed the PrEP4All advocates to Mike Mowatt, who directs the NIAID patent and tech transfer office. Mowatt also confirmed that the patents are valid and enforceable.

The Trump administration has proposed $291 million dollars in their new budget for “Ending the Epidemic.” Meanwhile, billions of dollars in PrEP royalties are being left on the table by the CDC. Why?

“We have not received an answer from the CDC,” James told me. “The most insulting thing of all is that the CDC responded ‘no comment’ when The Washington Post asked them why they are not enforcing the Truvada as PrEP patent. They won’t even dignify the question with an answer. We deserve an answer. The HIV community deserves an answer. The United States taxpayers deserve an answer.”

Imagine what we could do with the royalties that belong to us. The PrEP clinics that could be funded, the availability of PrEP for anyone who needs it at a price tag of pennies per day, the tools we need to truly end the epidemic as we know it. Fortunately, we are HIV advocates. Our legacy is built on standing up to the powerful.

OUR GOVERNMENT IS WITHHOLDING PREP PROFITS. NOW WHAT?

If you are attending AIDS Watch this week:

If you are not attending AIDS Watch or reading this afterward:

We have facts on our side, folks. We know the power of HIV advocacy. And that’s money in the bank.