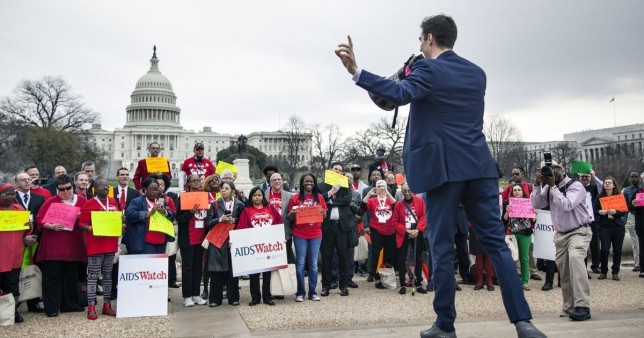 AIDSWatch May Have Ended, But Our Work Is Just Beginning

Here’s how you can bring fired-up HIV advocacy to your home community.

AIDSWatch was bigger and more impactful in 2017 than it had been in any of its previous iterations. What was already the largest federal constituent-based HIV advocacy event in the United States grew by leaps and bounds this year! The event doubled in size, with more 650 HIV advocates from 34 states, Washington DC, and Puerto Rico coming to our nation’s capital for the event. AIDSWatch participants were able to listen and learn from one another’s experience and knowledge and speak their truth to the power that sits on Capitol Hill and decides whether or not we have the resources to combat the HIV epidemic in their communities.

To that end, AIDSWatch participants conducted 260 meetings, 80 of which were one-on-one with a Member of Congress, using their time with their elected officials to impart to them the policy changes and additional resources needed to end the HIV epidemic, and to call for protections to programs critical to the health and well being of people living with and affected by HIV. Among those 260 meetings, a substantial number were dedicated to sometimes underrepresented groups within the broader HIV community, giving voice to transgender HIV advocates who are too often silenced and syringe service providers who find themselves on the front lines of the fight against HIV without the requisite resources and support to do their job.

However, statistics alone cannot get at the heart of what made this year’s AIDSWatch so remarkable. The passion and desire of HIV advocates is what makes AIDSWatch the event that it is today. This desire, driven by the urgency born out of being forced to fight for access to the health care that keeps hundreds of thousands of Americans living with HIV alive and well, is what sustains AIDSWatch. Unfortunately, the life or death nature of fuel that stokes the fire of AIDSWatch means that an unusually large increase in participation is often preceded by events that place the health and well being of people living with HIV at great risk.

Before the ink had even dried on the headlines proclaiming Donald Trump the winner of the 2016 presidential election, HIV advocates knew that this year’s AIDSWatch—and every AIDSWatch for the next 4 years—could not be business as usual. In the blink of an eye, all of the hard-won gains of the Affordable Care Act (ACA) that helped provide quality health care for people living with HIV were placed on the chopping block. Everything from Medicaid expansion and prohibitions against denying coverage based upon pre-existing conditions to income-based subsidies designed to help low and middle-income Americans was at risk, and the specter of those devastating losses was a ubiquitous and motivating force at this year’s AIDSWatch. The protections and policy changes sought by HIV advocates had not changed in any great measure, but the prospects of losing recently won policy gains have grown immensely.

Fortunately, thanks to the tireless work millions of citizen-advocates across the country making their voices heard in town halls, protests, and call-in days to their Members of Congress the first coherent attempt by Republican Congressional leadership and the Trump Administration to repeal and replace the ACA had already crashed and burned in the House by the time HIV advocates touched down in Washington for AIDSWatch. But, victory in the battle against the American Health Care Act (AHCA) is only a small step towards winning the war for quality, affordable health care. In the wake of their initial defeat, reports have surfaced that House Republicans are busy tweaking the AHCA to make its provisions more appealing to the far right, by allowing states to waive crucial essential health benefit requirements and giving insurers license to raise premiums based on a person’s pre-existing conditions.

If we are to halt the unconscionable rollback of patient protections and access to affordable health care being pursued by Republican leadership in Washington and make any progress towards ending the HIV epidemic over the next four years, we must use AIDSWatch 2017 as a springboard to greater action. At its core, AIDSWatch is an event created by grassroots activists, for grassroots activists. The size of an AIDSWatch or the number of meetings its attendees go to are all certainly important, but those things don’t amount to much if they are not carried back with us to our own communities. Over 650 HIV advocates engaging their Members of Congress on Capitol Hill is powerful. Over 650 HIV advocates leaving Capitol Hill and engaging their peers and neighbors back home to fight for comprehensive and affordable health care for all people living with HIV in America is transformative.

Today Congress heads into April Recess, and will be back in their home district through April 23. This is the perfect time for AIDSWatch participants to test out the skills they honed in Washington D.C. and share their experience with their communities. It’s also a great opportunity for HIV advocates who weren’t able to make it to this year’s AIDSWatch to raise their voices in resistance. Visit AIDS United’s Policy Action Center for ways to engage those in your community and, for even more ways to get engaged, head over to our new AIDSWatch@Home page where you can: