Detail from the CDC’s HIV surveillance report. See the full infographic below.

This Amazing Infographic Sums Up New HIV Data in the U.S.

Plus: Updates on the CDC director and the health secretary

With the government shutdown, immigration reform and the palace intrigue surrounding President Trump and Special Counsel Robert Mueller dominating the headlines this week, it’s likely that folks weren’t able to keep up with all of the developments going on in healthcare over the past week or so. Fortunately, AIDS United has you covered and we’ll provide you with a brief rundown of what’s been going on in the federal government concerning health care and HIV.

Alex Azar To Head HHS: On Wednesday, the vacancy left at the top of the Department of Health and Human Services (HHS) by Tom Price in the wake of his private air travel scandal back in September was filled, as former pharmaceutical company executive Alex Azar was confirmed by the Senate to lead the agency. Azar, who served as the President of the pharmaceutical company Eli Lilly for a 5 year period which saw list prices for their brand of insulin more than double, was criticized by many Democrats as being ill-equipped to curb rising drug prices in this country. However, Azar—who served as HHS Deputy Secretary in the George W. Bush administration—received almost unanimous praise from conservative lawmakers and was confirmed by a 55-to-43.

CDC Director Hampered By Conflicts of Interest: Despite being on the job for seven months, Centers for Disease Control and Prevention (CDC) Director Brenda Fitzgerald has yet to speak publicly before Congress about her agency’s activities because of conflicts of interest derived from financial holdings from which she has yet to divest. This past Wednesday, Fitzgerald was unable to testify before a Senate panel on 21st century public health threats. It is still unclear what issues Fitzgerald is barred from testifying on as a result of her finances, although an ethics agreement she released in December lists the areas of cancer detection and health information technology as key areas of conflict, while Senator Patty Murray (D-WA) has said Fitzgerald’s conflicts extend to the opioid crisis as well.

HIV Surveillance Report: Finally, the CDC has released an amazing infographic summarizing many of the findings of HIV surveillance report released at the end of 2017. You can see the infographic below: 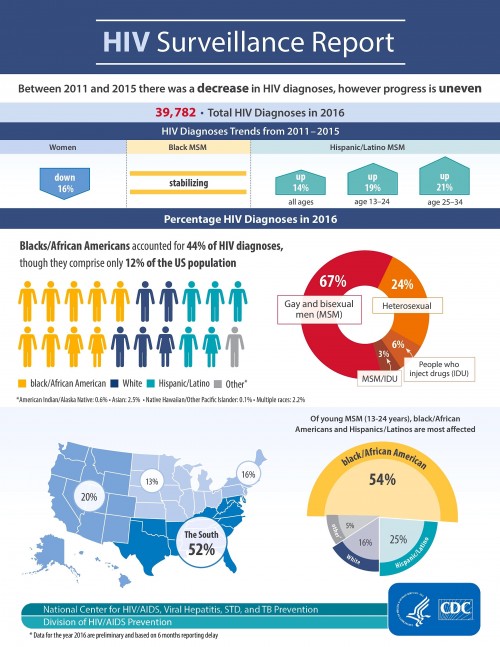