How an Angel in Whiteface Awakened My Inner AIDS Activist

As a little girl, I wanted to be a poet. I still write poetry but have always known I’d never make a living at it. I saw journalism as a way to write, earn a living, and — if given the opportunity — ignite my inner spirit.

Indeed my inner spirit was ignited as a journalist when in the 1980s I was given a special assignment to begin reporting on AIDS. It was the early days of the pandemic, and I was working at Sacramento’s NBC affiliate KCRA. In addition to producing my daily newscast, I was asked to create a weekly story about AIDS.

My report would be uploaded to a satellite public-service campaign developed by San Francisco station KPIX. AIDS Lifeline was nationally syndicated and to this day remains the largest AIDS public-education effort ever done on commercial TV.

KPIX received a Peabody and national Emmy Award for the reporting. Because of AIDS Lifeline, cities throughout the country were getting much-needed information about prevention, education, and saving lives. 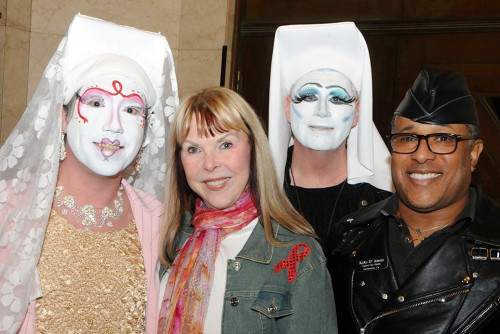 AIDS Lifeline urged local stations to take an activist role in their communities. A crisis was unfolding, and I was assigned to get involved.

For one of my many reports, I interviewed a Sister of Perpetual Indulgence in San Francisco where the Mother House of the worldwide order is based. As early as 1983, even before ACT UP, the Sisters were holding candlelight vigils in the city and raising banners that read: Fighting For Our Lives.

I went to the San Francisco apartment of one of the Sisters in 1986, and she graciously shared her story, showing me her habit and regalia. But the Sister’s story focused on her personal struggle living with AIDS. She taking AZT to combat the virus, one of the only meds available back in the day, and while talking with her, I learned about the debilitating side effects of the drug. We also talked about her prognosis.

It wasn’t good. Yet, her passion to educate was bigger than her own battle. Always and forever, I will love the Sisters, unconditionally.

I run an AIDS non-profit, and in 2016, the Sisters formed an order here in Sacramento. My organization, Capital City AIDS Fund (CCAF) now works with the Capitol City Sisters of Perpetual Indulgence.

They are raising money for charities, fighting for equal rights, and continuing with AIDS Activism. My journey has brought me full circle, taking me back to the early days when an Angel in Whiteface awakened my soul, igniting my inner spirit, turning my work as a journalist into the poetry of an activist.