After 15 weeks, 16 celebrities and countless tears and catfights, we have finally reached the season finale of Celebrity Apprentice! But, before we can get a glimpse of the prerecorded final project, Donald Trump needs to hang up his phone call with Mayor Bloomberg and travel across town in the back of Mario Andretti’s sports car to the American Museum of Natural History where the luckiest New Yorkers get to watch the ultimate battle between Arsenio Hall and Clay Aiken interspersed with a reunion of all the celebrity contestants.

To start the night off, last week’s cliffhanger was resolved after we were left wondering if Magic Johnson would turn and face toward the camera rather than giving us a good look at his inner ear. Thankfully the camera crew got a clue, and Arsenio’s public service announcement (PSA) was complete.

After both competitors finished their commercials, it was time to set up the parties. People baring the biggest checks could get one of the limited tickets to the final task. The finalists raised money for their charities by selling the tickets for thousands of dollars. Arsenio got Jay Leno, Chris Rock, Eddie Murphy, George Lopez, Jimmy Kimmel, Whoopi Goldberg and Marco Andretti to donate to the Magic Johnson AIDS Foundation. Meanwhile, on the other side of the curtain (the parties took place in the same venue but were separated by drapes), Claymates donning Clay T-shirts and inked with Aiken tattoos joined fellow American Idol alum Kelly Clarkson as they contributed to Clay’s charity the National Inclusion Project.

Intermittently throughout the screening of the final challenge, the show cut back to the live reunion of the ousted celebrities. Trump even made sure to bring back fan favorite Dayana Mendoza, who played for the Latino Commission on AIDS, and call her out on several occasions to remark on how beautiful and intelligent she is.

Back in the prerecorded past, Aiken went all out with the carnival theme, and it looked like the celebration was a blast--including cotton candy and baton twirlers and even Debbie Gibson Hula-Hooping while balancing spinning plates on sticks. I know I’m jealous I didn’t have thousands of dollars to buy one of the 75 coveted tickets to Clay’s event. Even though I’m rooting for Hall, his party was all about class, sophistication and getting drunk--all great things, but not what I’m looking for in a fiesta. 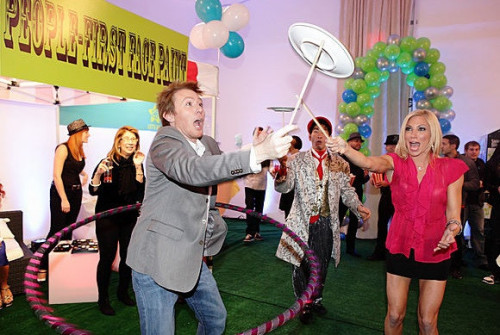 Once the proverbial Berlin Wall fell between the two events, party attendees rushed to the stage to watch the PSAs. Aiken’s was a typical informational charity commercial that I would have muted had it not been part of the Apprentice telecast. In contrast, Arsenio’s commercial was funny and creative--and a special appearance by Magic Johnson was the cherry on top.

Next up, the variety shows were a battle of the B-list comedians versus singers. The comedians, representing Arsenio, roasted and toasted the Trump family, while the singers serenaded the crowd. Overall I was thoroughly entertained by both.

The parties ended, and the finalists along with their teammates made their way back to the boardroom. The Trumps reveal that Clay brought in a lot more money: $301,500 to Arsenio’s $167,100. But the winner isn’t announced just yet. Instead, Aiken and Hall have to wait a few months for the live extravaganza. Luckily, viewers only have to sit through a few more commercial breaks and a really random duet of “Lean on Me” by the final two contestants.

Although it seems as if Clay is the clear winner, having thrown a rockin’ rager and raised the most money, Arsenio’s passion for his cause is clear when he recaps the loss of his cousin to AIDS and his dedication to his friend Magic. In the end, enthusiasm wins out, and Arsenio is hired by the Trump Organization and bestowed $250,000 in addition to his ticket earnings from the event. Overall, Arsenio raised a whopping $512,000 for the Magic Johnson AIDS Foundation throughout his stint in the show, which will certainly make a difference in the fight against HIV/AIDS.