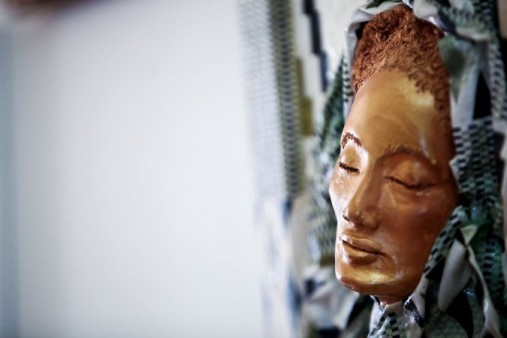 “Peace” (2004), by Joyce McDonald, is part of the exhibition “Persons of Interest” at the Lesbian, Gay, Bisexual and Transgender Community Center in Greenwich Village. Byron Smith for The New York Times

The following is an excerpt of Cotter’s review of Persons of Interest.  Read the full article here, including reviews of Art AIDS America, Deep Dive and Things.

For an experience with more traction, I recommend the eclectic group show “Persons of Interest,” assembled by the artist Sam Gordon at the Bureau of General Services – Queer Division, a bookstore and gallery at the Lesbian, Gay, Bisexual and Transgender Community Center in Greenwich Village. Mr. Gordon has drawn all the material from the heterogeneous archives of Visual AIDS, an organization that has been preserving, exhibiting and promoting work by H.I.V.-positive artists since 1988.

As its title suggests, this is very much a show about faces, bodies and personalities. Keith Haring is the one artist shared with the Bronx show (Art AIDS America); otherwise we’re in a whole other multicultural universe. From the Memphis-born Frederick Weston come two life-size figurative collages, one made from “found images of white men,” the other from “found images of black men,” to quote the exhibition checklist. Tim Greathouse (1950-98), photographer to 1980s East Village art stars, has a pantheon of portraits, including one of the art critic Nicolas Moufarrege, who died in his mid-30s, in 1985, and is represented by two of his own exquisitely embroidered paintings.

The self-taught Mark Carter (1954-2005) was into stars too, Diahann Carroll and Dorothy Dandridge among those he portrayed. Luna Luis Ortiz photographs himself as pharaoh; Joyce McDonald sculpts her queenly profile in clay, African cloth and costume pearls. In a video, Chloe Dzubilo (1960-2011) appears as exactly what she was, a passionate activist who knew that outside was always the right side.

As a highlight, there’s a 1979 video in which the much-missed artist and gallery owner Hudson (1950-2014) takes a genius solo turn as a poodle. And as if to clinch Mr. Katz’s theory that the influence of AIDS-era art lives on in a new generation, the youngest of Mr. Gordon’s artists, Ben Cuevas, born in Los Angeles in 1987, returns us to a just-post-Stonewall New York in a photo of a distinctly 1970s-looking guy cruising a West Village street.

Read the rest of the article here.