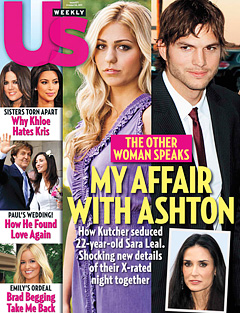 The current cover of Us Weekly features Sara Leal--the woman who allegedly had a recent affair with Ashton Kutcher. The story has been circulating in the tabloids and on Twitter for the past couple of weeks, and it’s not the first time that Kutcher’s been accused of cheating on wife Demi Moore.

While these rumors may or may not be true, this week, Us shares Leal’s side of the story. And according to her, the two did not practice safe sex:

After retreating to Kutcher’s bedroom past 6 a.m., “he lost his towel and I took my robe off,” Leal says. “Then we had sex.”

“He was good,” Leal reveals. “It wasn’t weird or perverted.” It also wasn’t 100 percent safe, either: Leal tells Us that Kutcher did not wear a condom during their one-on-one encounter.

Quite frankly, whatever happens between Ashton Kutcher and Demi Moore is their business. But if Leal’s account is true and he is having unprotected sex with strangers, he’s risking a whole lot more than his marriage.

So here’s our advice to Ashton:

It doesn’t matter if it’s New Year’s Eve or Valentine’s Day, when it comes to HIV and other sexually transmitted infections, What Happens in Vegas doesn’t always stay in Vegas (or in this case San Diego). This year marked the 30th anniversary of the AIDS epidemic--it’s no longer That ’70s Show. And when you Spread your Personal Effects without protection, it’s Open Season for HIV and other STIs.

Regardless of whether it feels A Lot Like Love, or if the sex was intended to have No Strings Attached, it’s a bit Miss Guided to simply Guess Who else your partner may have slept with in the past. It shouldn’t take Two and a Half Men to figure out that it all comes Down to You: No one else can be The Guardian of your sexual health.

So wear a condom--you can even get them Cheaper by the Dozen.

Science, Not Politics, Must Lead to COVID Vaccine Approvals