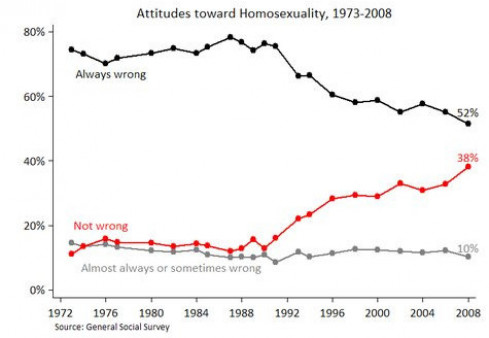 Blogger extraordinaire and POZ cover boy Andrew Sullivan wrote an entry on July 7 in his blog, The Daily Dish, tying a turnaround in public attitudes toward homosexuality in 1990 (see chart) to AIDS-related deaths.

"That was thetransformative, traumatizing effect of AIDS on both gay and straight America. It came in the early 1980s, but the deaths only reached their stunning peaks in the early 1990s - which is when the polling shifts. "Remember: most of these deaths were of young men. If you think that the Vietnam war took around 60,000 young American lives randomly over a decade or more, then imagine the psychic and social impact of 300,000 young Americans dying in a few years. Imagine a Vietnam Memorial five times the size. The victims were from every state and city and town and village. They were part of millions and millions of families. Suddenly, gay men were visible in ways we had never been before. And our humanity - revealed by the awful, terrifying, gruesome deaths of those in the first years of the plague - ripped off the veneer of stereotype anddemonization and made us seem as human as we are. More, actually: part of our families. “I think that horrifying period made the difference. It also galvanized gay men and lesbians into fighting more passionately than ever - because our very lives were at stake.”

I couldn’t agree with him more. I remember the emotional see-saw I felt in 1991 when I tested HIV negative and then in 1992 when I tested HIV positive. All of us who are HIV positive go through that, but I relate to his assessment that something changed at that time. That feeling, as fleeting as it was, is what allowed me to believe things were going to be fine.