A Bad Tax Bill Gets Worse After Conference

The final legislation will undermine health care and safety nets while helping the most wealthy. Who will vote against it?

In the wake of Doug Jones’s stunning win in the Alabama Senate election and his pending replacement of the outgoing Luther Strange (R-AL), pressure is on Congressional Republicans now more than ever to get their first legislative victory of 2017 and push through their tax plan. At the moment, House and Senate Republican leadership are said to have reached an agreement on how to reconcile the differences between the bills passed in their respective chambers. They have agreed in principle to a sweeping tax plan that would massively redistribute wealth to the wealthiest Americans, undermine the Affordable Care Act and set the stage for draconian cuts to safety net programs like Medicaid and Medicare in 2018.

While the legislation is still being written, the central tenets of the conference tax plan seem to have been agreed upon by Congressional Republican leadership. By and large, the GOP tax plan would act as a reverse Robin Hood, taking from the poor and middle-class to give money to the rich. The tax plan would include a reduction in the corporate tax rate from 35% to 21%, a reduction in the top tier individual tax rate from 39.6% to 37%, a repeal of the individual mandate that will take away health care from 13 million people, a 20% deduction in taxes for pass-through businesses, and a doubling of the estate tax exemption. 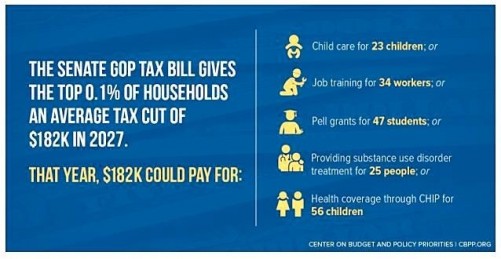 Advocates still are working to ask both Houses to reject the conference tax bill.  However, the Senate seems to be the body most likely to reject the conference tax bill, in large part due to the Senate GOP’s small margin of error (only 2 GOP Senators can vote no and have the bill pass). Senators Bob Corker (R-TN), Susan Collins (R-ME) and Marco Rubio (R-FL) have all threatened to vote against the tax bill if their needs aren’t met.

For his part, Senator Corker maintains his same reservations about the bill’s impact on ballooning the deficit that he did when he voted against the Senate passed tax plan, while Senators Collins and Rubio are both pushing for specific additions to the bill

Senator Collins has insisted on the passage of two temporary ACA stabilization & reinsurance bills (known as “Alexander-Murray” & and “Collins-Nelson”) at the same time the tax bill goes through. This seems very unlikely to happen due to staunch opposition from the House Freedom Caucus. Collins also made clear before her yes vote on the Senate tax plan that she expected Senate Majority Leader Mitch McConnell (R-KY) to make good on his guarantee that the bill’s passage wouldn’t lead to cuts in Medicare. To accomplish that Senator McConnell would have to orchestrate passage of a waiver of the statutory pay-go sequester (which would require a 4% reduction in Medicare spending) and create agreement among House and Senate Republicans not to pay for the bill’s tax cuts by cutting Medicare at a later date. In reality, the GOP has been very open recently about wanting to pursue major cuts to Medicare in 2018.

For Senator Rubio [and to a lesser extent Senator Mike Lee (R-UT)], the demand being made centers around a modest expansion of the child tax credit. At the same time, Senator McCain (R-AZ),  continues to be treated for cancer and was recently  hospitalized which could impact his availability for votes next week.

AIDS United opposes this conference tax bill, just as we opposed both the House and Senate tax plans before. We continue to fight back against this unequal and unjust tax plan and we ask for your your help to do so. You can take action by calling and emailing your own members of Congress and telling them that these bills hurt all Americans, especially those living with and affected by HIV/AIDS.

Update: by Monday evening, December 18, both Rubio and Collins expressed support for the bill.