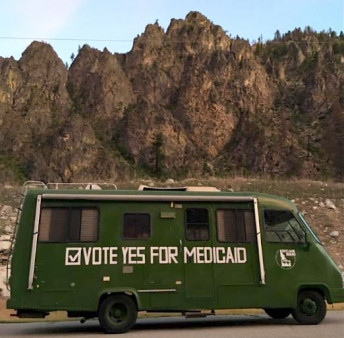 These Ballot Initiatives Could Have a Big Impact in the Midterms

Remember: It’s not all about seats in Congress.

Since the dust began to settle from the 2016 election and the Republican stranglehold on power in Congress and The White House became clear, political pundits and many in the HIV community began to look ahead to the 2018 midterm elections, keen to see whether or not the Democrats could claw back control of at least one, if not both houses of Congress. However, while the 470 House and Senate seats that will be up for grabs this November are of tremendous importance for the future of nation in general and HIV policy in specific, there are a number of impactful ballot initiatives for voters to consider in several states that could have a significant impact on people living with HIV. Here, AIDS United will take a look at a few of those ballot initiatives and seek to unpack what they might mean for the HIV community.

Medicaid Expansion Goes West: In all likelihood, residents in 3 very red states west of the Mississippi will be voting on whether or not to expand Medicaid. As of this July 17, Medicaid expansion will be on the ballot in both Utah and Idaho, with Nebraska expected to see its expansion initiative given the green light by the state’s board of elections. At a time when the Trump administration is doing everything in its power to undermine the Affordable Care Act and saddle existing Medicaid expansion programs with onerous, counterproductive work requirements, it is a promising sign that states with heavily Republican voter bases are at the very least considering expanding Medicaid.

In 2016, voters in the slightly bluer, but still largely GOP-led state of Maine overwhelmingly supported a ballot initiative to expand Medicaid in the state. Unfortunately, Maine’s soon-to-be-departing Governor Paul LePage has fought the implementation of the state’s Medicaid expansion program at every turn and, as of the writing of this article, the future of expansion in the state is currently hung up in the courts. Should voters in Idaho—the most stridently conservative of the 3 states considering Medicaid expansion in November—support the Medicaid ballot initiative, the state’s Republican gubernatorial candidate Brad Little has already come out on record as saying that he “will adhere to the will of the voters.” Following the Virginia legislature’s passage of their state’s Medicaid expansion program earlier this year, Idaho, Nebraska and Utah are 3 of only 18 states who have not expanded the program.

Transgender Rights On The Ballot in Massachusetts: This November, Massachusetts residents will be asked to vote on a veto referendum concerning an already passed piece of legislation (Senate Bill 2407) barring the discrimination based on gender identity in public spaces like hotels, restaurants and stores. The referendum was spearheaded by the right-wing, religious Keep MA Safe campaign and the Massachusetts Family Institute, which has routinely demonized transgender individuals in their promotional material, referring to those in the transgender community as performing “sexual charades” and engaging in fallacious fearmongering to claim that the right of a transgender person to use the bathroom of their choice is a grave threat to the safety of women and girls everywhere. Fortunately, it doesn’t appear as if the people of Massachusetts are falling for this grotesque argument, with a recent poll showing that only 38% of voters supported repealing the law.

Abortion Under Attack In Alabama & West Virginia: Hot on the heels of Justice Anthony Kennedy’s retirement from the Supreme Court, voters in Alabama and West Virginia will be faced with ballot initiatives that would add anti-abortion language to their state constitutions and potentially have a huge impact on access to abortion should the federal protections offered by Roe vs. Wade be overturned or weakened in the coming years. In West Virginia, the ballot initiative would amend the state’s constitution to say that “nothing in this Constitution secures or protects a right to abortion or requires the funding of abortion,” nullifying a 1993 state Supreme Court decision affirming the right to both abortion care and Medicaid funding for abortion. Alabama’s measure would be farther reaching, but, so long as Roe as we know it is upheld, less impactful in the short term. In their ballot initiative Alabama abortion opponents want to add language “to recognize and support the sanctity of unborn life and the rights of unborn children, including the right to life” in their state constitution.

While problematic in their own right before Justice Kennedy’s retirement, these ballot initiatives now represent threat to abortion rights the likes of which have not been seen since Roe was made the law of the land 45 years ago. Regardless of their success in November, abortion rights experts believe that ballot initiatives of this sort will be seen with increasing frequency in future elections in states that are already hostile towards a woman’s right to chose.