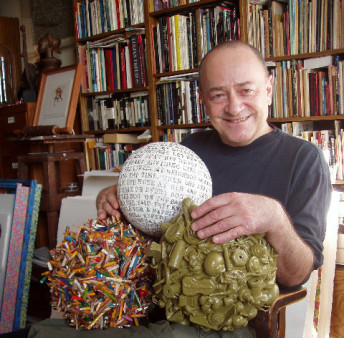 I got an email from the brother of my friend Barton Benes, informing me and other friends that Barton died this morning at NYU Medical Center. It wasn’t a surprise; Barton had been very ill and when his kidneys began to fail last week he made the decision to stop further treatment.

Death was familiar to Barton, as it is to so many gay men of our generation. Familiarity breeds a certain matter-of-fact acceptance. Barton endured the loss of his partner, Howard Myer, and innumerable others to AIDS (including Jeffrey Schaire, the mutual friend who introduced us).

Barton absorbed death into his work as an artist, exploring loss, mourning, grief and release through sculpture and collage, often cleverly exploiting our ingrained fear and revulsion at the unthinkable and inevitable fate from which none of us will escape. POZ’s Laura Whitehorn said if she were to compare Barton to a poet, it would be to John Donne, “who played with death throughout his work and made it a lover along with an enemy, thus allowing us to live more fully.”

For more than 20 years of our friendship, on Barton’s dining table there was always a small pile of pottery shards, each pasted with a piece of a photograph of a deceased friend. Most died from AIDS. The pictures are carefully torn from casual snapshots to fit the shape of each shard. They show happy, serene and beautiful faces, photographed at moments of joy and peace, even ecstasy. The first few times I visited Barton he sorted through the pile slowly, holding each one in his hand for a moment. He told me the stories of each friend, what they were like, what he missed about them, the circumstances of their last days. It was through his recollections of those friends that I learned Barton’s own life story.

Later, as more shards were added to the ever-growing pile, they were usually people I knew as well, including a number of former POZ contributors and staffers. When someone neared death, he would carefully select the picture and shard to be used for their contribution to the pile. Sometimes he asked me or other friends which picture we thought best. Then the candidate image and shard would sit on his worktable for a few days, or few weeks, until the person died.

Upon hearing news of someone’s death, Barton was almost compulsive in immediately pasting picture to shard, giving the deceased’s memory a new lease on life as a part of an emotionally powerful sculpture. He didn’t like there to be much of a gap between their death in life and rebirth in his shard pile.

In the mid 90s, after my health came back, a friend told me that when I was so sick and covered with Kaposi’s Sarcoma lesions, Barton had already made a shard for me. He denied and said he only had picked out the picture and shard, but never glued them together.

Another work of Barton’s, titled “Brenda” consists of 200 4-inch high ribbons, modeled after the iconic red ribbon representing AIDS awareness. But these ribbons are stiff and gray, encrusted with his friend Brenda’s cremains, and mounted in solemn rows on a wall. When Brenda is exhibited, visitors invariably go mute, unsure what to say when confronted with a wall of ashes from a woman who died of AIDS.

James Barden and Noel McBean were lovers and friends of Barton’s who were moved by “Brenda”. They knew their own time was coming soon, so they spoke to Barton about creating something from their ashes. James and Noel died within a few months of each other. Barton created a gigantic hourglass—about three feet tall—and filled it with their ashes. When the hourglass is turned over, they sift slowly from the top to the bottom, eerily achieving immortality in art. The “time running out” message is obvious, but Barton also saw the piece as a way for James and Noel to stay together. Barton was practical that way.

Not all of Barton’s work was macabre or dealt with death. He celebrated shapes and colors and textures and words. Anything could constitute material for him; he worked with shells, currency, wax, hair, bodily fluids, relics and ephemera of all kinds. He entered a new phase of his work every few years. For a while it was shells, another time it was work made of (not with) pencils. In the accompanying picture he is holding several pieces from his “balls” stage. One of his closest friends (and biggest collectors) was actor Larry Hagman; Larry came to New York two weeks ago, with his Dallas co-star, Linda Gray, and they brightened Barton’s day with a visit to him in the hospital.

Larry subsequently kept in touch with Barton’s brother to monitor his progress. Theirs was a treasured friendship, with Barton almost like a surrogate son or surrogate kid brother to Larry. They shared a Charles Addams-like sense of humor, an impish manner and an ironic appreciation of the bizarre. When Larry had gallstones removed, he asked the surgeon to save them for Barton who made a ring out of them.

Barton lived for more than 40 years at Westbeth, the legendary artists community in New York’s West Village. His loft there was like something out of a Harry Potter set, crammed with exotic tribal art, fetishes, mummies, oil-burning lamps, layers of hand-woven rugs from indigenous cultures around the globe, mysterious lighting, an ever-present aroma of incense as well as his own workspace and supplies. He was fascinated with mummies and had several ancient Egyptian ones, including those of a cat, a mouse and the arm of a human. He named that one Lefty.

If his taxidermy collection were to come to life, it could populate an Ark. The stuffed neck and head of a giraffe looms over his dining table; an elephant’s foot is a footstool. When Barton’s friend Howard was ill with Kaposi’s Sarcoma, he had huge lesions on his body that turned a violent dark color, almost black, as the skin encrusted and died. One morning Barton found a hard nubby piece of black organic matter in their bed. When he took Howard to the doctor that day, he told him that parts of Howard’s KS lesions were breaking off. That night, as he was going to bed, he looked up and saw the deer mount above the bed had lost its nose.

When Xavier Morales and I visited Barton yesterday, he was unresponsive and we didn’t think he knew we were there. But when Walter Armstrong and I were there on Saturday, he was occasionally able to nod his head in response to questions. I spoke close to his ear and when I said I hoped he wasn’t in pain, he nodded his head from side to side, indicating that he wasn’t. The most vigorous response I got that day was when I told him that after his death, his many friends and fans would work hard to make sure his amazing body of work would be honored, recognized and respected for its importance. He nodded affirmatively; that is music to any dying artist’s ears.

I cherish Barton’s work because he was my friend, but also because it is such a powerful encapsulation of the lives so many of us led throughout the worst years of the epidemic in the 80s and 90s. Living through the AIDS holocaust propelled Barton to take greater and greater risks with his talent, thereby achieving a true vision of his time in history. There was nothing sentimental in his vast work about death, memory, grief and loss but there is a ferocity coupled with a tender wit that made for a lasting rebuke to this unforgivable epidemic.

Death cheated us of so many of our artists and their contributions, but fate balanced the score a bit by endowing some who lived with a profound talent to tell the tale of our times and provide insight into how we managed to live and love each other while struggling to survive amidst a toxic backdrop of governmental neglect, religious hatred and corporate greed.

Barton’s beloved and devoted brother, Warren, wrote beautiful emails, almost daily, to a long list of Barton’s friends. How he could be so generous after spending ten or twelve hours or more at the hospital, I do not know. Yesterday he commented on and marveled at the network of loving friendships Barton enjoyed:

“When push comes to shove, through Barton, there has been a criss-cross of relationships of you all who have become friends simply because somehow you met Barton or he met you and then you met someone else through him. He has had a knack of doing this through the years and has created a family of friends and relatives that will move through the years living and loving and knowing each other.”

What he described is accurate, of course, but it doesn’t apply only to Barton. That loving “criss-cross of relationships”, or what is sometimes called one’s “chosen family”, is what has bound so many of us together over the years. In a macro way, POZ itself is a large, extended chosen family. To the extent that metaphor works, Barton was a curious and beloved Uncle to us all and in his death we have all lost someone very important.

We will mourn and miss him. His memorable loft and studio space will be recreated in a special permanent exhibit at the North Dakota Museum of Art in Grand Forks, North Dakota. Barton left instructions that his own ashes be placed on a pillow on the bed, where he’ll be present with every visitor. 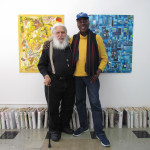