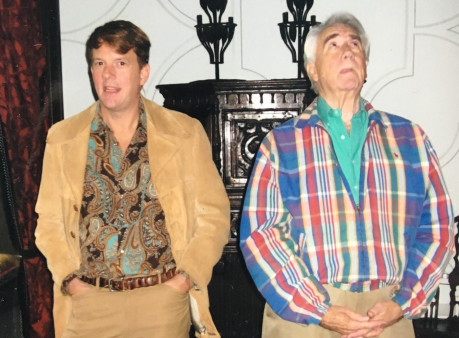 In “I Favor My Daddy,” I tell my conservative father Daddy Poo about sex with priests, crack addicts and dwarves.

I want to share with y’all a story I tell in the climax of I Favor My Daddy, my current solo show about my father Earl, aka Daddy Poo. I’ve already skipped and stumbled down the well-trod but always satisfying (I think) path of mother-gay son relationships. The father-gay son road can be harder to navigate because, gay or straight, fathers and sons are both men, so meaty conversations can be harder to crack open than a Brazilian nut.

I never wanted Daddy Poo, my Catholic, conservative, Republican father down in Beaumont, Texas, to know about the priest, or the dwarf or the crack addict. But when you write a memoir about your alcoholism and your sexual peccadillos during those louche days, there’s a big chance he may find out. 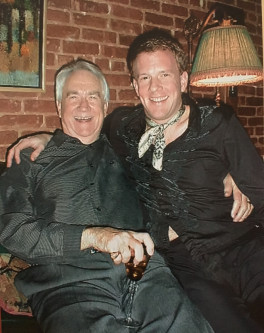 From left: Daddy Poo and Jamie

My whole life he’d wanted me to become a writer, a talent I inherited from him. (He’d been an amateur writer himself.) I finally did it, but late in life, because I was too busy being an alcoholic. The good thing for a writer about being an alcoholic all those years, you gather an avalanche of material.

From the day I signed the contract with my publisher, Daddy Poo was as excited about the book as I used to be about my next drink. Well, not that excited. After that our phone calls went something like this:

“Is this Jamie Poo? How’s that book coming?”

“Well, hurry up and finish. I want it to come out before I die!”

I’m not proud of this but I kind of wished he would die before it came out, so he’d never read it.

As excited and proud as he was, I was afraid of how’d react. Daddy Poo knew I was gay. I came out back in college. He probably knew before then. And he knew I’m an alcoholic in recovery who bottomed out on a suicide attempt, but we’d never talked about the lurid details, which involved the afore mentioned sexual escapades including an incident while high on coke in Rio de Janeiro when I almost had a sex with a woman. Named Gladys. That’s the real shocker. I was revealing things in that book I’d never thought I’d tell him, much less the whole world. And I wrote frankly about my relationship with my mother, his wife, Mama Jean. He was still carrying the torch for her three years after her death.

After she died, I was hoping to get closer to him, deepen our relationship. Not that our love for each other was ever a question, but she took up all the emotional space in the room when it came to me, so there was no room left for Daddy Poo, for us. I was hoping we’d get to know each other better, maybe trade some secrets.

But I was terrified about how he’d react to what I wrote about Mama Jean and my sexual shenanigans. Worried he’d say, “You can’t publish this book of debauchery and… and appalling promiscuity. Not while I’m still alive and living in this town.” He’d his whole life in Beaumont, so he was a product of that small, conservative town. And so was I. Even though I’d been out and living in New York for over twenty years, I still worried about what Beaumont thought.

I considered not letting him read until a month before it came out, after the presses had already rolled. That way, if he had a bad reaction, it would be too late to chicken out. Then I thought, no, put on your big girl panties, get on a plane, and deliver the manuscript in person, which is what I did a year before the book came out, Easter weekend 2014.

When I gave it to him, he disappeared into his study with the three-and-a-quarter-inch manuscript, while I sat in the other room on the edge of my chair like a bug-eyed cat on orange alert. 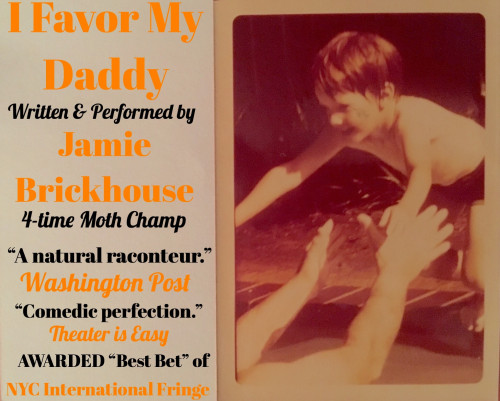 A poster for the one-man show “I Favor My Daddy”

Daddy Poo was a very vocal reader. Oh, God! That’s good. Yeah! Wow. Love it! Let’s read that again. It sounded like he was having sex in other room. He moaned. He groaned. He guffawed. He even wept. At one point when he barked a laugh, I couldn’t resist. “Hey, what’s going on in there?” “Oh nothing. You just went home with a priest!”

When he finished, he shuffled out of his study holding the manuscript between both his hands like it was a sacred bible. “I love it. Absolutely love it. And I love what you wrote about Mama Jean.”

“Well, she said I get my writing talent from you.”

“That may be, but I could never have written anything like this. Damn it’s good. Are you happy with it?”

I looked him in the eye and said, “Yes.” And it wasn’t until that moment that I realized that I was not completely happy with the book. I didn’t realize just how much I needed his blessing. It was the same giant exhale of relief as when I told him I’m HIV positive two years earlier. I’d been in the closet about my status for 10 years, but I finally told him because I was considering revealing my status in the book. Telling him liberated me to tell the world. Once he gave me his unconditional approval of the book, I didn’t give a damn what the rest of the world—what Beaumont thought. It unleashed conversations between us over the next few months we’d never had: about both our relationships with Mama Jean, about religion, about drinking, about sobriety, about love, about sex, about sex with priests.

The following New Year’s Eve 2014, four months before the book came out, Daddy Poo died suddenly. Of course, I was devastated, but I was angry that he wouldn’t be here for the publication of the book. “Hurry up and finish! I won’t it to come out before I die.”

But he did read it, so Daddy Poo died knowing everything about me, and probably loving me more because of it. I wanted desperately for us to grow closer in those last years we had together. It happened at the eleventh hour. And it happened the only way it can happen between two people: by revealing ourselves, by being vulnerable. Had I chickened out and not gotten on that plane and let him read the manuscript, he wouldn’t have been able to give me one last time, what he’d always given me, his unconditional love. Thank God, I put on my big-girl panties.

Jamie Brickhouse is a New York Times published author, 4-time Moth StorySLAM champ, and the author of Dangerous When Wet: A Memoir of Booze, Sex, and My Mother, which is also an award-winning solo show he is currently touring.