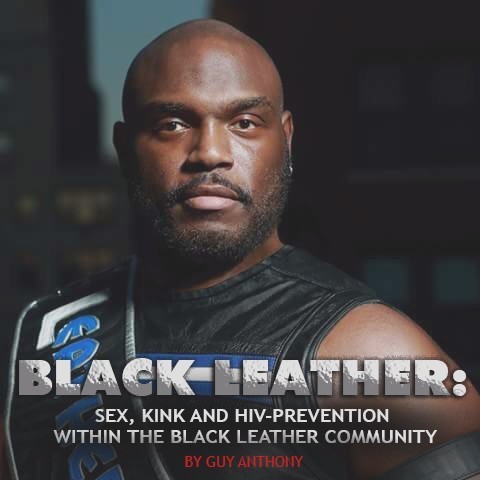 That was until I met 2016 Leatherman of Color, Khalid El-Bey, who happens to be an unassuming gentle giant - in leather chaps.

When he approached me a few months ago about raising money for my organization Black, Gifted & Whole, I was both confused and flattered. I didn’t think we would be the type of organization he would be interested in supporting. I had an unsubstantiated theory floating around in my peanut head about who and what the leather community represented. My own fear of what others thought of my body prohibited me from being as sexually free and affirming as they. The fact that my body had been compromised countless times as a child crippled my sexual liberation.

As an openly HIV-positive Black gay man living in DC, I had to check my respectability politics. This is where the brightest of the bright shine, where the political savvy call Capitol Hill home. Who you’re seen with and where you work are qualifiers for friendship. Should you dare to deviate from the proposed agenda of successful Black gay men here, you might as well pack up your Camry and head back to your humble beginnings. For this reason alone,  I celebrate people like Khalid, who say that I can love my body, eroticism and the lives of those most impacted by HIV--all at the same damn time.

Most gay men have heard of Onyx, but not many Black gay men. Why do you think there may be a disconnect between the Black gay community and the leather community?

We celebrated our 20th Anniversary in Chicago, IL during what was called BlackOut20 (BOXX) in the fall of 2015. We are a leather fraternity founded and operated by men of color yet we are open to anyone who is interested in the fellowship of our brotherhood. ONYX’s mission is to be an informational and social organization that addresses issues specific to people of color who choose to project the positive aspects of the leather lifestyle and support our community and economic initiatives. Our motto is: “Educate, Explore, and Empower.”

I feel that many in the Black gay community initially think that we are a sex club and/or that leather is for only white people. ONYX has a long standing reputation within the leather community with members both nationwide and internationally.

For the record, ONYX is the longest existing leather club for people of color and is known for its hospitality and infamous annual ONYX leather dance at International Mr. Leather (IML) Weekend in Chicago and our cocktail party at Mid-Atlantic Leather (MAL) in Washington, DC.

Some people would not associate philanthropy or HIV prevention with the leather community, but you actually serve as a volunteer outreach and peer counselor and harm reductionist. Why do you feel it’s important to serve in this position?

The leather community has a long tradition of fundraising. There are a number of organizations that were founded at the height of the AIDS epidemic by members of the leather community to fundraise for AIDS-related charities. The majority of people who have HIV in this country are not developing AIDS and dying; as a result, the leather community is positioned to lead in the prevention of HIV and halting its spread.

I personally volunteer in the capacity of an outreach and peer counselor, and harm reductionist because it is not only aligned with skill sets that I acquired while serving in the United States Navy as a hospital corpsman, but also because within the Washington, DC region, often the people that are less likely to access these services and yet might benefit the most from them tend to look like me. Also, I consider myself as a “Service Sir,” which means that I tend to lead by working in the trenches therefore not only leading by example but also in action(s).

For Black gay men living in DC, politics play a huge part in who we connect with, who we are seen with, where we shop, where we work and even who we love. Why do you feel it’s important to be as vocal as you are about your position in the leather community?

I feel that many of those Black gay men that you speak of in DC have ample opportunity to give back rather than simply being seen in the community. Many people do not realize that it was the leather and drag communities that banded together during the AIDS crisis to raise money and take care of our own when families had written off the dying. Those luxuries of being “mainstream communally accepted” came at a price that today’s gay men might not be willing to pay again if faced with the same challenges as our predecessors. Given the current state of politics, I feel that I have a moral duty to live my truths and be active rather than take a backseat to those issues that affect me.

After you were confirmed as the host of our upcoming Cigar Social at the DC Eagle, some people challenged the idea of us working with you since we work so closely with young Black gay men. What would you like to say to those people?

Those same young Black gay men that who some people say that I’m not fit to be around are contracting HIV at alarming rates and are at risk through not knowing enough about things that they may be interested in - if not already experimenting and/or experiencing them. I encourage these young men and/or anyone that is curious to attend an educational session or series that leather clubs offer. ONYX offers this education in the form of To Educate and Cultivate Hotness (T.E.A.C.H) educational sessions. These sessions are intended for men of color and are presented by members of ONYX.

Many people in the leather community are hardworking professional people both in and out of leather. Personally, I have served in the military and was honorably discharged; I managed to gain an undergraduate and master’s degree, and I have a good job. Am I not an example of a role model?

What does it mean to hold the title of Leatherman of Color? Are you committed to changing the views of others? If so, how?

The title of Leatherman of Color provides me with a once-in-a-lifetime platform that allows me to share who I am, educating others on the leather lifestyle. I can plan to show up, show out and as a result having something to show for it. I am more than humbled to have this title, and the opportunity it affords, and everything I do in connection with it, I take seriously. In my title year, I have a few firsts, one is a goal of making this title more visible than it has been in the past. I am aiming to place very well at IML38 in Chicago. After IML, I am looking forward to presenting kink workshops at conferences, judging contests, and continuing in my current role as Assistant Pledgemaster of ONYX MidAtlantic.

As someone who celebrates all Black gay men, I commend you for being unapologetically Black AND Gay. It was of no importance to me that you were a part of the leather community, if anything, I was more invested in sharing your story. What is the one thing you wish people understood about leather?

Thank you. Leather is more than just a lifestyle, it is a brotherhood. If you know anything about leather, many items can be cut and created from one hide. While the final product may differ in form and use, it is a part of the same visceral. It is in leather that I am most present, without fear, or explanation.


Khalid will host our Summer #CigarSocial at the new DC Eagle on Sunday, April 24, 2016 from 4pm-8pm. To attend, please RSVP here! 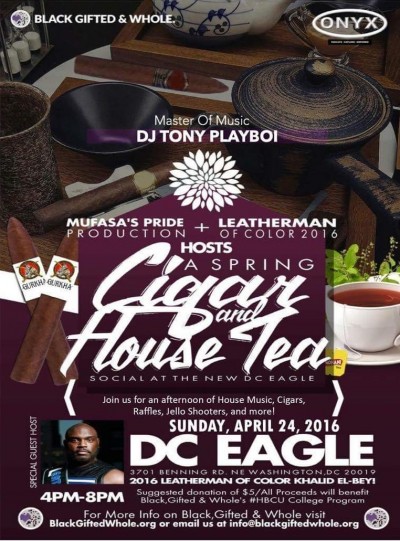