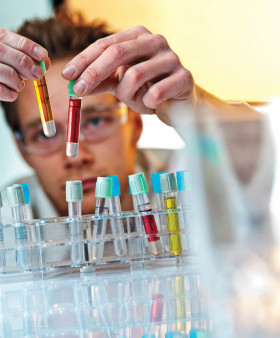 Two NYC hospitals plan to use coronavirus-survivor plasma as rx

Liise-Anne Pirofski, an infectious-disease specialist at Albert Einstein College of Medicine, is reminded of the urgency she felt as a young doctor at the start of the AIDS epidemic in the ’80s. “I met with medical residents last week, and they are so frightened of this disease. They don’t have enough protective equipment, and they are getting sick-- or are worried about getting sick,” she says. Even the smallest thing we can find to help turn the tide, to boost morale, to see just a glimpse of light marking an end somewhere to all this, would be so, so welcome right now.

(To be sure, these "days of AIDS“ nostalgic comparisons that seem to crop up in every other piece of reporting right now fail to mention that unlike this current pandemic no one is being disowned by his/her family, no one is afraid to be found out for fear of losing a job, no one is being told that this is god’s retribution, and no community is having to fight this alone with no funding in the shadows. There were no Tom Hanks, Sophie Trudeau, Utah jazz moments of celebrity solidarity. No, we had Rock Hudson and Roy Cohn and Michel Foucault and Perry Ellis, all whom had to suffer their illness in shame and die in ignominy. No U.S. president, no NYC mayor, even acknowledged the now celebrated ”days of AIDS" until he was forced to, some four, five, six years after the first cases, only after we picketed, in leather jackets and Dock Martens, in front of their homes. There was no --and still is no-- targeted bail out package, although we are grateful for the state Adaps. There was no new emergency funding for testing, care and research-- until we took to the streets pressuring them to do so.)

Also eerily similar to the ’80s, with little to no effective therapies at their disposal, researchers are turning to a century-old approach of infusing patients with the antibody-laden blood of those who have survived.

The efforts follow studies in China that attempted the measure with plasma — the fraction of blood that contains antibodies, but not red blood cells — from people who had recovered from Covid-19. But their studies have reported only preliminary results so far. This “convalescent-plasma” approach, as it is called, proved only modestly successful during past Sars and Ebola outbreaks, but the NY teams are betting that their approach-- to find and use only the most antibody rich plasma-- will produce superior or more dependable results.

A key advantage to convalescent plasma is that it’s available immediately, whereas drugs and vaccines take months or years to develop. Infusing blood in this way seems to be relatively safe, provided that it is screened for viruses and other infectious agents. Scientists who have led the charge to use plasma want to deploy it now as a stopgap measure, to keep serious infections at bay and hospitals afloat as a tsunami of cases comes crashing their way.

“Every patient that we can keep out of the Icu is a huge logistical victory because there are traffic jams in hospitals,” Michael Joyner, an anaesthesiologist and physiologist at the Mayo Clinic in Rochester, Minnesota, told Amy Maxmen, a Nature reporter. “We need to get this on board as soon as possible, and pray that a surge doesn’t overwhelm places like New York and the west coast.”

Only two days ago, Andrew Cuomo announced theemergency plasma use plan for NY, which has been making headlines in recent days (and also received self-satisfied scorn from our newly crowned Clinician-in-Chief) as the number of identified coronavirus cases here continues to mount-- in no small part due, surely, to the fact that New York State is testing more aggressively than any state in the union-- other than, perhaps, Washington. And soon as next week, at least two hospitals in the city — Mount Sinai and Albert Einstein College of Medicine — hope to begin.

During the Sars outbreak in 2002–03, an 80-person trial of convalescent serum in Hong Kong found that people treated within 2 weeks of showing symptoms had a higher chance of being discharged from hospital than did those who weren’t treated, Maxmen reported. And survivor blood has been tested in at least two outbreaks of Ebola virus in Africa with some success. Infusions seemed to help most patients in a 1995 study in the Democratic Republic of the Congo, but the study was small and not placebo controlled. A 2015 trial in Guinea was inconclusive, but it didn’t screen plasma for high levels of antibodies. Arturo Casadevall, an immunologist at Johns Hopkins University who has been fighting to use blood as a Covid-19 treatment since late January, suggests that the approach might have shown a higher efficacy had researchers enrolled only participants who were at an early stage of the deadly disease, and therefore were more likely to benefit from the treatment.

Researchers in China have also been conducting studies using the plasma, results have not been reported. Liang Yu, an infectious-disease specialist at Zhejiang University School of Medicine in China, told Maxmen that in one early study, doctors treated 13 people who were critically ill with Covid-19 with convalescent plasma. Within several days, the virus no longer seemed to be circulating in the patients, indicating that antibodies had fought it off. But their conditions continued to deteriorate, suggesting that the disease might have been too far along for this therapy to be effective. (Most had been sick for more than two weeks.)

In one of three proposed US trials, researchers plan to infuse patients at an early stage of the disease and see how often they advance to critical care. Another trial would enroll severe cases. The third would explore plasma’s use as a preventative measure for people in close contact with those confirmed to have Covid-19, and would evaluate how often such people fall ill after an infusion compared with others who were similarly exposed but not treated. These outcomes are measurable within a month, she says. “Efficacy data could be obtained very, very quickly.”