This is a guest blog by Bryan Jones. Bryan is a founding steering committee member of the Undetectable = Untransmittable campaign (U=U) and the founder of the DIRT (Direct, Inspiring, Reachable, Teachable) Advocacy Movement, an initiative that addresses communities of color with conversations that look like us, talk like us, and live like us.

As someone who’s been living with AIDS for 37 years, some days I thrive and some days are not so good. I have beat cancer three times, with the worse being stage 4 cancer while chained to a prison bed, on top of losing tons of friends in the early years. At one point, I said to myself I didn’t ask for this the only thing I did ask for was death.  I many times wonder why was I left behind.

When U=U came into my life it was first through the Swiss statement [written in 2008].  At that point, I was resistant to every drug that was out there but I felt good about it and I felt good about the community. At first, I was confused about why my doctor didn’t tell me, but I felt hopeful about the community. The Swiss statement made me realize that I [survived] for a reason, that I really wasn’t left behind I was still here pushing forward for all those friends that I lost who died before the ARV’s came into effect and who died before the miraculous news of U equals U which I was left here to experience.

It changed my life in many ways. First, it made me feel I could allow myself to love again. ln hindsight, I realize that when I received my diagnosis, a part of me was left behind. So now U=U is me equaling the real me because now I am able to regain and nurture that part of myself that I had lost, which was the ability to love again.  U=U first and foremost has allowed me to love myself again. I tell people that the science that supports U=U helps disband stigma whether you are able to reach viral suppression or not because it changes the way negative people feel about us.

As a black same-gender-loving man and Muslim I have a lot of isms and stigma to overcome in that statement.  U=U has made me hold my head proud as an advocate activist speaking everywhere folks are listening and even where they’re not listening trying to reach just one, trying to reach that one person that’s struggling with acceptance of their status. By digging deep, I am now able to also reach that other person who’s struggling to accept those living with HIV unconditionally.  Through my “DIRT” advocacy movement I explain Undetectable equals Untransmittable loud and clear to my black folks and people of color, because that’s where I live and that’s where I sit.

I often hear the conversation in hushed tones that U equals U is “leaving people behind” and causing a viral divide. I simply exclaim you can’t cause something that was already there [before U=U was known]. The divide existed because of the intersections of other structural and social disparities that exist. This divide existed even before ARV’s because black folks and people of color have always been denied equal access to care as well as other supportive services. HIV and COVID-19 are just symptoms of larger inequalities, lack of or unequal access to care. If we don’t address the root of the tree, the leaves will never grow.

To those living with HIV and AIDS who have yet to embrace or flat out don’t believe in U=U, I very frankly ask them, “Do you believe that you have an HIV diagnosis?” They say yes. “Well, it’s the same science that told you that you have an HIV diagnosis that is telling that if your virus is suppressed that you cannot transmit HIV to your sexual partners, so do yourself a favor by taking the stress and worry away.” 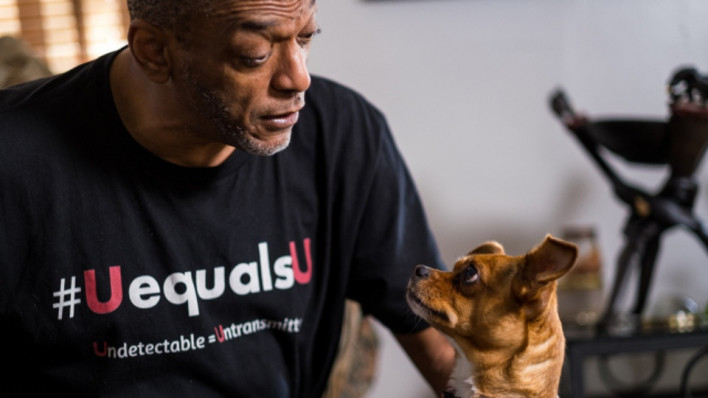 I think many people are confusing the U=U global movement with the science. I often hear, “What about those people who can’t reach a suppressed viral load?” This causes me to reflect on my own life, because there was a time... when I was resistant to everything out there and achieving an undetectable or suppressed viral load was not in my game plan. My doctor kept telling me, “Just hold on!” Miraculously enough, I held on for six years and a new drug came out, and within two months I reached a suppressed viral load. Folks need to understand that if it can happen to me it can happen to anyone.

There are those that, for a myriad of reasons, can’t reach viral suppression. I encounter many folks who are speaking on their behalf and in some cases are using this as a blanket statement. If you are looking to address this concern then I think you have misplaced anger because it’s not the global movement of U = U that you should be speaking negatively about. I advocate to Black folks that it is important for us to understand the science for ourselves in order for us to able to understand and support U=U immediately because it clearly educates on the science. If one is looking to carry a torch about the viral divide then direct it towards the researchers, scientists, and doctors,  who have come up with these miraculous studies (that I might add are helpful to us all).  But even they shouldn’t be reprimanded because they have brought us this far.  The viral threshold of 200 is just the tip of the iceberg.   We may learn in a few years that you can have a viral load of 1000 and still be untransmittable.  Those who really are concerned should dig a little deeper and do your research (I advise you to look into the Ugandan cohort, one will be surprised what they will find).

Lastly, I hear folks say U=U doesn’t look like black folks and those most impacted by HIV. But in my hood it does. I make sure it looks like my people because I have made it look like us by teaching all whom I encounter from my black lips to their black ears. I encourage folks instead of talking about what’s wrong with U=U, let’s celebrate what is right with it. Let’s celebrate the science and celebrate each other.