Bugs in the Bedroom

Tomorrow Gwenn and I are heading out again, only this time we are going to be doing an HIV education program called “Bugs in the Bedroom”.

It differs from “A Boy, A Girl, A Virus” in that it also focuses on general STIs and involves a lot of props and role playing with students. The program is livelier, but it also has a chaos element that is both exhilarating and terrifying. Telling our personal story is easy- trying to fit a condom onto a 12-inch fake penis, called “The Czar”, is not.

You should see airport security’s face when we go through screening: someone always nudges a co-worker, as if to say, “Get a look at this!” They must think Gwenn is insatiable. We used to have these big cut-out bugs, one representing viral infections, the other representing bacterial infections. Several years ago, as I was going through the screening here in Charlottesville, one of the older guys grabbed it off belt and started touching his co-workers. 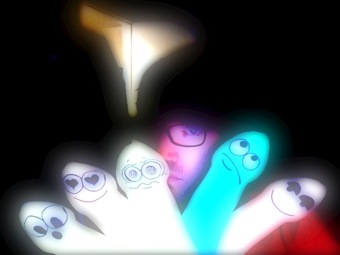 The next time we flew out of C’ville, an employee who was around my age apologized; this was months after the spectacle, which was mildly entertaining. I wasn’t really offended by the incident, but it was stunning that someone in their 50’s would react that way to being confronted with something sexual. I guess it’s mind-melting work, looking for bombs in Charlottesville’s airport.

We also bring along the dicks pictures here, which have some information on the back. The plus side of this program is that I get to be crafty, and really put my art skills to the test. These guys came out surprisingly well!

Still, even with funny-looking Dicks, this program is terrifying. Being a thinblood on stage with props and humans who respond to sex in strange ways isn’t the safest spot to be in. I guess, if worse comes to worse, I can defend myself with a 12-inch penis, or with one of the props that we bring along for the program.