The Secret World of Campusport

Was enjoying one of my favorite things today- an iced mocha- when the phone rang. It was a call I have been dreading for months.

As I mentioned previously, after 8 years with the speaker’s bureau, Campuspeak, Gwenn and I have decided to fly solo. The relationship ended amicably, we love those guys and enjoyed the partnership and everything we learned not only from them, but the incredible people who have worked for them as employees, interns and speakers.

One thing I didn’t write about, however, was CAMPUSPORT.

An off-shoot of Campuspeak, CAMPUSPORT represented a dark side of the speakers. During conferences and other events that brought us together, we’d sneak off to a bowling alley to compete for the trophy. Mental health issues advocate, Ross Szabo, is the only other human being to ever hold the beloved trophy. But for the last couple of years, I and I alone have ruled the lanes.

The controversial logo of Campusport was never made public, until now. 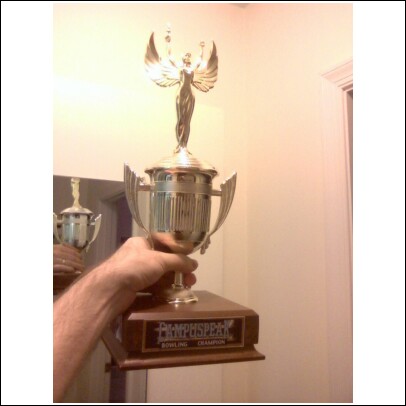 As my cell rang today, I thought the gig was up: that Campuspeak was reclaiming my trophy. See, one of the requirements to be Campusport champion is that you must be with Campuspeak.

“Can you fill in for a speaker?”

Apparently something fell through for Thursday, and I’m flying across the country tomorrow morning to pitch in for another speaker. Is it because I am a good person? A team player?

No. It is because I can use this as an excuse to hold onto my beloved Campusport Trophy for one more semester. From my cold, dead hands...

PS... I’ll be blogging from the air and road on this trip via my cellphone. So through Friday, you can read about my adventures on my Twitter.com micro-blog.