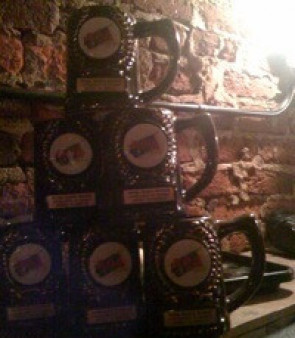 Last night I went to pool league, and obtained my championship mug. For the second season in a row, the 8-man 8-Ball team I play on—The Overlords—have been the points leaders in Charlottesville. I couldn’t believe I haven’t bragged about it on the blog yet.

Receiving the mug should have been a good thing, but lately my competitive spirit has started to take over my life. There’s no official name for what I’m feeling, so I’m going to call it ACADS: Acute Competitive Anger Disorder Syndrome. There’s no need for the “Syndrome” at the end, it just sounds better with the “S”.

Anyway, I’m really putting a lot of pressure on myself to defend the Stroke Play putt putt championship next time I play Ben, and to hold up my end of the bargain in pool league alongside the Overlords.  Now, when I compete, it’s not just for my own ego, it’s for the hopes and dreams of everyone living with AIDS.

Representing an entire community- while glorious- definitely has it’s drawbacks.

I’m trying an experimental therapy to nip ACADS in the bud. This week, I’m going to a live wrestling event. Kind of a shock therapy.  By watching 3 consecutive hours of wrestling without the fast forward feature on TiVo, I’ll be exposing myself to others who have, or at least pretend to have, ACADS as well.  (To see my POZ column in which I interviewed Ric Flair, go here.)