Clockwise from top left: Attendees at “For F#cks Sake;” with survivor Tez Anderson; a massage in the ’Positive Lounge;’ a reveler at ’No Pants No Problem;’ the monkeypox protest; with activist Jade Elektra.

A wrap-up of the articles, posts, and videos filed during AIDS2022 by POZ blogger Mark S. King.

If you know anything about me, it’s that I’m not a clinician or researcher. I leave those stories to people who are better qualified. Instead, I view conferences like the international AIDS conference in Montreal (AIDS2022) through the lens of a long-term HIV survivor. As someone told me during AIDS2022, the first word in HIV is “human.”

So, let’s take a look at my AIDS2022 coverage with a certain sense of whimsy and generosity of spirit for the many fabulous humans who continue to inspire and uplift us. This wrap-up includes a sprinkling of tweets and video clips you might have missed that didn’t appear on the My Fabulous Disease site.

Before AIDS2022 had even begun, I posted my first piece ("The Gays Descend on Montreal for AIDS2022") about hanging out with a group of other gay men on the eve of the conference while in Montreal’s gayborhood. It’s a slice of life about how urgently we needed one another, in person, after such a long absence. Moreover, it emphasized that our group of white gay men would soon be joined, and outnumbered, by women, people of trans experience, and people of color from all over the world - and what a beautiful and vital thing that is.

One of my favorite pre-conference events has always been MPact Global’s event designed exclusively (as in, only men are invited) for men who have sex with men or, as I like to call it, “Gay Day.”

The pre-conference event sponsored by the Prevention Access Campaign, creators of the U=U mantra, was packed and brought together a global audience of people who have shared the message and brought new angles to its importance.

The big news, in my second article from AIDS2022 ("HIV Campaign ’U Equals U’ Has Been Adopted by Entire US Government"), was that the United States and Canadian governments jointly announced they had officially adopted “U=U” into their programming. This will open up all kinds of policy and funding opportunities for people living with HIV.

I’ve always strolled into the conference “Positive Lounge” for people living with HIV but have never written about the experience. I suppose that was because of my mixed, confused feelings about the space.

My next article tackled my misgivings head on ("Who needs a Positive Lounge at AIDS2022, anyway?"), with a lively interview with Positive Lounge organizer Jordan Arseneault, a Montreal man living with HIV. Jordan is an outrageous quote machine and I hated leaving most of his quips on the editing floor, but you’ll get the idea. This article both challenged my perspectives and resolved them.

No pants? No problem! The best celebration of the global #HIV world. #AIDS2022 #NPNP pic.twitter.com/261vb5ZryF

The premiere social event of the conference (and yes, that includes all the haughty, moneyed receptions sponsored by Big Pharma) was “No Pants No Problem,” the multi-gendered/sexuality/HIV status dancefloor bacchanalia hosted by the force of nature known as Jessica Whitbread. 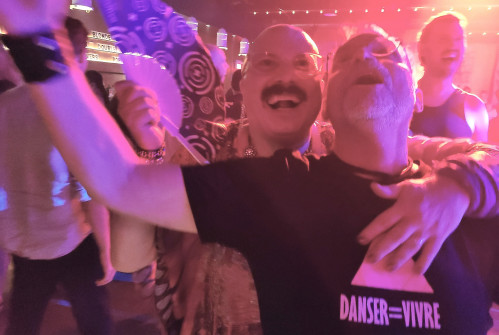 My article about the event ("AIDS2022 ’No Pants No Problem’ Party Lived Up to its Name") has some of my favorite photos of the conference, and also includes video and an interview with Jessica explaining why the AIDS2022 “No Pants” event will be its last.

Everyone should have a conference husband (or wife). @6dm4 is mine at #AIDS2022. He keeps my spirits up, and waits patiently when I am swarmed by fans. #HIV survivors unite! pic.twitter.com/0C5ipFlAya

Protests are so commonplace at conference events that they are literally scheduled into the agenda, with pre-planning between activists and conference organizers. Obviously, that can take some of the edge off. That wasn’t the case for the urgent, rageful protest from monkeypox activists that disrupted an AIDS2022 morning plenary on the monkeypox response.

My article about the protest ("Monkeypox Activists Disrupt AIDS2022 with Rageful Protest")  included video of the protest and remarks afterwards by the CDC’s Demetre Daskalakis. 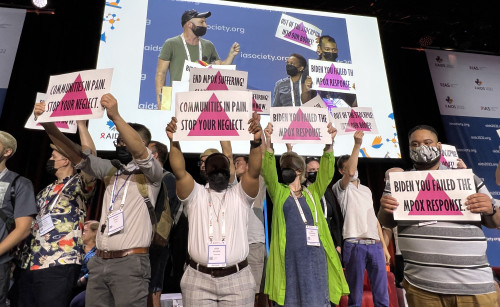 The one encouraging aspect of the U.S. response has been some non-shaming, sex-positive/neutral language that has been posted by the CDC about monkeypox transmission and prevention. I hear tell that there will be more CDC developments soon. 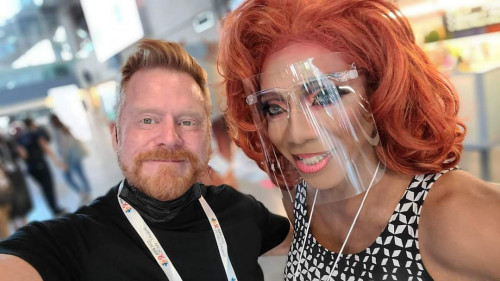 Me with activist Jade Elektra

And then there were the random conversations, sight and sounds that I couldn’t resist including in brief video clips.

They included a protest in the exhibit hall against the Canadian government for their truly shameful denials and slow-walking of visas for AIDS2022 attendees, leading to hundreds of registered attendees being barred from entering Canada – including scholarship recipients who otherwise had no means to attend!

#HIV community activists are protesting the Canadian gov’t booth at #AIDS2022 over the shamefully slow visa process that kept registered delegates and scholarship recipients out of the event. “NO VISA NO VOICE!” pic.twitter.com/kuMTlWMtLQ

Great to be at the @HelpEndHIV booth at #AIDS2022 where an #HIV vaccine is possible. pic.twitter.com/1bTkfF8UqV

And a stroll through a sampling of the artwork on display…

The art display at #AIDS2022 includes #sexwork advocacy and gorgeous portraits of ppl living with #HIV. Check this out. @redumbrellafund @DesireeAlliance @pozmagazine pic.twitter.com/hXXKB6tYQf

And a chat with another long-term survivor, Tez Anderson (keep an eye out for our complete conversation about life, mortality, activism, and what life’s next chapter has in store, coming soon right here).

Longterm survivor @TezAnderson has a message for #AIDS2022 (and the rest of us). #HIV survivors must speak for ourselves! pic.twitter.com/jOc72xtH4b

And some final thoughts for every community member to keep in mind...

One final thought as I leave #AIDS2022 in Montreal. Hint: it will always be to to us to hold “the people in charge” responsible. #HIV #survivor pic.twitter.com/FaKykzyJeY

That’s probably more than enough. I’m exhausted just seeing all this content again. It reminds me of the very specific diet I relied upon for six days to keep me going: 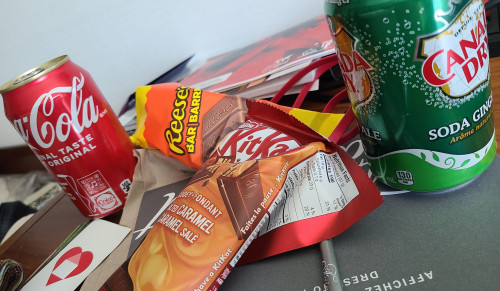 Until next time, my friends, please be well.

p.s. Extra thanks to my friend and helper at AIDS2022, Derrick Mapp, who shot most of my video clips and generally kept my spirits up. Activism is friendship, y’all.