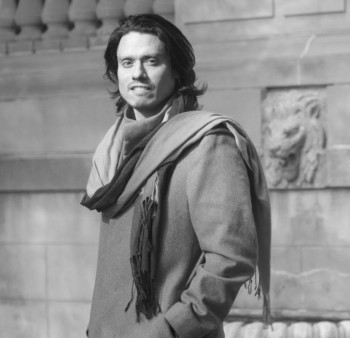 This “is proof that you can take any personal challenge and turn it into a positive,” says the DC advocate.

It brings all of us here at AIDS United great joy to announce that Julio Fonseca has been named as 1 of the final 50 people to be featured in the OUR HEROES exhibit, which includes black and white framed photographs and shines a light on individuals, places, events and organizations that played a significant role in the fight to end AIDS in Washington, DC, over the past 32 years. Julio, who is a Program Manager at AIDS United and responsible for oversight of the Partnering and Communicating Together to Act Against AIDS (PACT) Initiative and People Organizing Positively (POP), wrote the following blog reflecting on his time as an HIV advocate and the continued struggles we face with HIV stigma.

If you wish to see the OUR HEROES exhibit, an opening night event will be taking place on Monday December 2, from 5:30 to 9:00 PM at the Metropolitan Community Church art gallery in Washington, DC. The exhibit will be housed at the MCC gallery until December 17.

“Our greatest glory is not in never falling but in rising every time we fall.” Confucius

Growing up gay in the DMV—that’s DC, Maryland and Virginia—in the early 1990s, I snuck into DC to hit theaters, bookstores, and coffee shops in Dupont Circle and dreamt of living in the city. I went to GMU and stayed in the area working in public health with a desire to be a part of the local HIV response. My late stage HIV diagnosis in 2009 fortified my desire to do HIV education and advocacy work. After receiving exceptional care in DC, I felt compelled to give back to ensure others could benefit from my experience.  Volunteering as a mentor to newly diagnosed people and serving 4 terms on the DC Regional Planning Commission on Health and HIV have demonstrated firsthand the importance of meaningfully involving people living with HIV in their care and the HIV response. At AIDS United, I deliver innovative approaches to HIV education/prevention messaging and support the leadership development and community organizing of people living with HIV (PLHIV). PLHIV are experts and without our voices in leadership, we will never beat this disease.

One battle we continue to face is that of HIV stigma. The lack of comprehensive sex education coupled with HIV stigma have surfaced recently in the report from the Prevention Access Campaign that includes the statistic that 28% of HIV-negative millennials said they have avoided hugging, talking to or being friends with someone with HIV.  We still have a lot of work to do, but I feel that by continuing to have open and honest judgement free dialogue, we can stop HIV stigma together.

This honor carries meaning for me because it recognizes work that I have been a part of directly and is proof that you can take any personal challenge and turn it into a positive. I love my hometown so to be recognized as a part of the DC HIV response is a dream come true. “Nothing about us without us.”