Connie Shearer: “What Does the Undetectable = Untransmittable Message Mean To Me?”

In this U=U Community Blog Post, Connie Shearer shares what the U=U movement and message means to them 20 years after their diagnosis.

It was early in 2016 when I was on social media in the Long Term Survivors group when I saw a post from Bruce Richman (Before Prevention Access Campaign [launched]) speaking about how if a person living with HIV has an undetectable viral load they could not transmit to their partners.

I was maybe one of the first few people who did not immediately attack him and tell him he was trying to kill people. I am not saying I did not have issues with the information at first, I did. But, like so many other gatekeepers, I was worried that other people living with HIV may not be responsible with this information and would likely use it inappropriately. I never thought he was lying or being dishonest or trying to kill anyone. I knew he was right because at that time I had been living with HIV for Twenty-three years. I may not have Dr before my name, but I am not stupid. It doesn’t take an ID doctor to believe this information if you have had the amount of unprotected sex that I have had in two decades without transmitting, but once. And yes, Karen, I disclosed to everyone I had sex with.

Why did I trust him when so many others did not? Do I have some secret degree in science I haven’t told anyone about? Nope, I was on clinical trials in the late 90s when they used the word undetectable and I saw then that I was having sex without condoms for the entire two years I was on that clinical trial with my negative boyfriend and he did not acquire HIV. At least not until my clinical trial ended and I lost access to those life-saving ARVs. When my viral load went up and I became infectious again, I transmitted to my boyfriend. So, firsthand knowledge is far more realistic than some information from a book. Going in for HIV tests every six months and getting a negative result compared to that last time when he got his positive result is an experience you will never forget. I don’t need a book to tell me the approximate timeline to being infectious after losing access to treatment.

That’s what being U=U means to me. It means that will never happen again. I have been living with HIV for twenty-five (25) years this, February 20, 2020. In that time, I have had a baby, been married more than once, and never transmitted HIV again after gaining access to treatment in 2001. Being undetectable is a life changing reality because it gave me control over transmission.

Living an overall healthy life is the newest goal. And that means that I must keep everything in check, not just my viral load. One thing many people living with HIV are unaware of is how important their CD4% is to their overall health. Your complete Cd4 fluctuates from morning to night with afternoon and directly after exercise being times when lab results will show increased numbers. However, your CD4% does not fluctuate and is a much better guide to overall health in relation to viral suppression.

[In A&U Magazine in Septmeber 2016 I said]: “As a society, we can end not only HIV/AIDS but every STD/STI without help from outside sources if we as individuals make our sexual health a priority. We do this by knowing our status and protecting that status with every resource available. Like PrEP, TASP, and by creating awareness around the Undetectable equals [Untransmittable] campaign that cites 58,000 acts of penetrative sex with zero transmissions. We do that in hopes that it pushes those who are living with HIV or possibly AIDS, to get in and get tested. Know your status and make HIV end with us.” 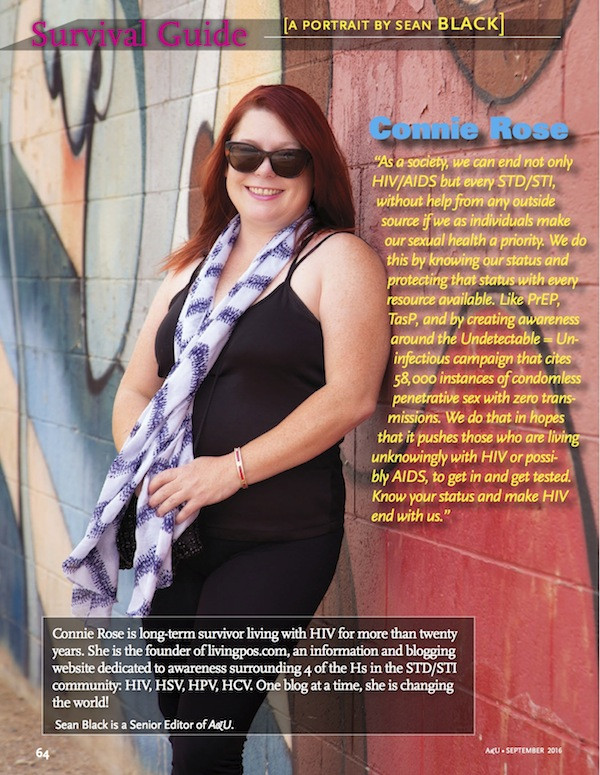