You Can Count on Her, For Sure

Dionne Warwick was recently honored with a star on the Palm Springs’ Walk of Stars for her legendary career and advocacy work.

Happy birthday Dionne Warwick! The music legend and HIV activist turns 81 today. I had the pleasure of seeing her last week for “An Intimate Evening with Dionne Warwick,” where she was honored with a night of music and memories at Oscar’s Palm Springs. The next day, the six-time Grammy award winner received the 447th star on the Palm Springs’ Walk of Stars. 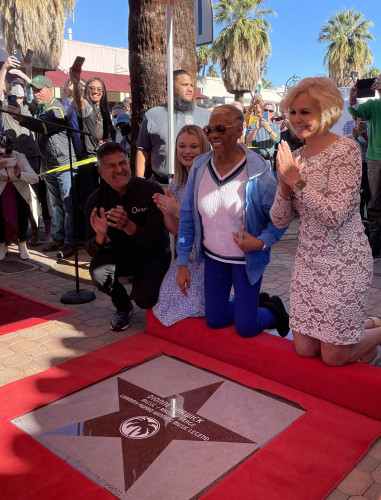 Dionne Warwick received her first Grammy in 1969 for the song “Do You Know the Way to San Jose?” and has sold more than 100 million records. The former television host of Solid Gold is a best-selling author and has recently become a hit on Twitter. Last month she released a charity track, “Nothing’s Impossible,” with Chance the Rapper.

Early in the HIV epidemic, Warwick lost her valet to an AIDS-related illness. She was one of the first celebrities to publicly support HIV research and prevention. In 1985, she recorded “That’s What Friends Are For” with Stevie Wonder, Elton John and Gladys Knight, which raised more than $3 million for amfAR, The Foundation for AIDS Research. In 1987, Warwick was appointed United States Ambassador of Health by President Ronald Reagan. (She once made Reagan say the word “AIDS”) Her support for people living with HIV has been steadfast through the years. In 2017, she became a goodwill ambassador for ACRIA and released three public service announcements to raise awareness of HIV in adults over the age of 50—especially African-American women.

Dan Gore, the owner of Oscar’s, was behind the community-driven campaign to bring Warwick to the desert and spotlight a career that has spanned more than six decades. My neighbor Steve Rosenbaum directed the tribute show, which included performances of classic Warwick hits sung by Freda Payne, Carly Hughes, Rodney Davis, Ronee Martin, Rusty Hamrick, Kialani Mills and Dan Bauer. Between the songs, actress Juliet Mills, singer-songwriter Carol Connors and Dionne Warwick impersonator Tim Gunn each shared personal memories about the star. At the end of the evening, Warwick was brought to the stage and presented with a large birthday cake, which everyone got to enjoy. 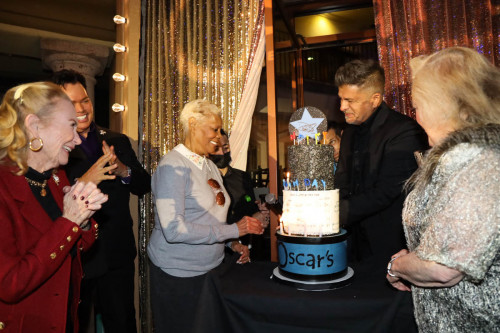 Dionne Warwick is presented with a birthday cakestevesimage.com/Steven Williams

The next day at the star dedication ceremony, Warwick explained why she’s been a lifelong advocate for others: “My grandfather, who was a minister, told me and my siblings at a very young age that we are all here to be of service to each other. She added, "Not only that, he also said, ’if you can think it,  you can do it,’ and I followed that mantra.”

Thank you, Dionne Warwick for doing all that you do for the HIV community! That’s truly what friends are for.