Who Counts? Some Thoughts on HIV Surveillance

HIV surveillance technologies continue to develop at a rapid rate. How does this affect our HIV community?

My first few HIV tests were anonymous - something inconceivable today. I was relieved that the information was mine and mine alone. After I tested positive, I still needed time to process what happened. It took a couple months before I saw a doctor (one I had for the better part of 15 years). The possibility of privacy continues to be eroded with scientific advances that are being implemented in public health.

Molecular HIV surveillance. Cluster detection. HIV phylogentic sequencing. HIV phylodynamic monitoring. Recency assays. These are all phrases that have recently emerged in the HIV field. Some have been around for a decade but their use has been limited. Now these are being rolled out in every health jurisdiction in the United States.

In the public health sense, surveillance helps us understand how disease and health conditions emerge and spread. With good surveillance, we can see what’s happening and estimate what will occur. Robust public health efforts have helped us understand disproportionate rates of asthma in the Bronx, the emergence of West Nile Virus in the Northeast United States, and the disproportionate impact of HIV-related mortality across all racial/ethnic groups domestically.

Molecular phylogenetic sequencing is done to determine if there is commonality and relationships amongst DNA sequences. In public health, this has been used widely on food-borne diseases and certain animal outbreaks. About a decade ago, it was used to examine HIV. Last year, the federal Centers for Disease Control & Prevention (CDC) rolled it out nationwide as Molecular HIV Surveillance (MHS).

MHS uses blood drawn from drug resistance testing in order to examine it for genetic similarities to other people living with HIV in the area. When there is a connection, these people are grouped together as a cluster. These groupings are meant to hone the focus of health departments and its resources to specific groups of people to ensure that people are put into HIV care.

Recency assays are used at the point of diagnosis to determine whether the person had HIV for a year or less. This is also supposed to help with “epidemic control,” as those with acute HIV tend to have higher viral loads. In this case, more attention would be paid to get people into care, as well as partner tracing.

What could go wrong?

Much of the concern in the HIV community amongst advocates and activists is the enhancement of a system that can involve institutions like law enforcement (and in some cases, ICE). HIV disclosure cases are still prosecuted in most of the United States (even those without explicit laws). These cases do not rely on science or, for the most part, any evidence of intent or transmission. Rather, these cases are brought against people living with HIV either in a “he said/he said” manner or when the District Attorney wants to get a bigger sentence for a suspected sex worker. In both cases, these laws are unnecessary, stigmatizing and put an unfair onus of proof on the person living with HIV.

In Tennessee last year, a man was placed in an ICE detention center in an HIV criminalization case. He is still awaiting trial and deportation procedures have already begun.

In my own life, I have been part of three syphilis investigations: one in DC and two in New York City. In all three, the health department representative threatened me with having the police involved if I did not give up names. Now some people might say that’s just a few over-zealous employees but when it happens 100% of the time, it might be more normal than health departments would like to admit.

We know who in the United States is left out of care and service networks, who experiences the most barriers with treatment adherence, and who remains “hard to reach” or “vulnerable”: people who are poor, people who use drugs, people of trans experience, people who are homeless, and Black and Brown people particularly gay and bisexual men. At least for institutions like health departments and clinics. In her remarkable book Private Bodies, Public Texts, Karla Holloway points out that “populations labeled as ‘vulnerable’ are patients whose medical care has been attached to identity.” She points out that this particular situation requires a more careful approach to ethics as the raced, gendered, sexualized and disabled conditions are not those that can be overlooked or “cured” in the rush to medical and health research and treatment.

The CDC has been somewhat surprised at the concern of HIV advocates and activists. In their world, these advances are scientific advances that will assist in “epidemic control” measures. They do not want to acknowledge that HIV remains stigmatized in a way that no other disease is, and that we exist inside legal and socio-economic frameworks that do not treat us the same as others. While the CDC is claiming they are in the ethical “right” (surveillance does not need informed consent as it is for the public ‘good’), they are giving health departments data to intervene in the lives of the most marginalized: people that the health departments already have poor relationships with (else, why are they not in care?). Does no one take responsibility for the harms these investigations may cause?

The CDC has rolled out one surveillance system (MHS) and is rolling out another (recency assays) with very little discussion with the communities most impacted. Us.

I remember when names reporting was a big issue. Debates went for years. Public health experts and community members engaged each other in town halls. Even when most states did it, a few held out until they were mandated by CDC.

This rush to new surveillance measures is partly because of the excitement of new technologies, partly due to the possibility of “epidemic control” (finally, I can hear some long-term clinicians and epidemiologists murmuring), and partly due to an unrealistic assumption that data is neutral and the hope that we as a society have progressed beyond stigma.

I don’t think people understand how systemic oppression and structural violence works. Often, people get into public health – and HIV in particular – because they want to “help people.” This altruism is supposed to excuse anything they do. We have all heard people who insist, “there is no HIV stigma here” even as they do not hire people openly living with HIV to do anything but “peer navigation” or something like that. We are only ever valued for our treatment adherence and our capacity to recruit other people living with HIV.

In a similar way, people at health departments and CDC genuinely (for the most part) want what’s best for the HIV epidemic. They just aren’t listening to our concerns for a broad variety of reasons.

And that’s NOT community engagement.

Why don’t our voices count for our public health partners anymore? 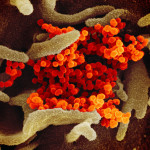 UPDATED: What People With HIV Need to Know About the New Coronavirus