COVID-19 and the Plight of Older People

Are sufficient resources being allocated to staff at care homes or to families who care for their elderly relatives?

The enormous number of deaths of older people in care homes over the past few months is shocking. It brings into stark relief something we already know and have known for some time. Something our political leaders have not adequately addressed, if at all.

Older people are much more likely to die of COVID-19 than are younger individuals. I have been acutely aware of this because I’m 87 years of age. With their zeal to restart economic activity I find it difficult not to accept that my government considers me and other vulnerable individuals to be acceptable casualties. 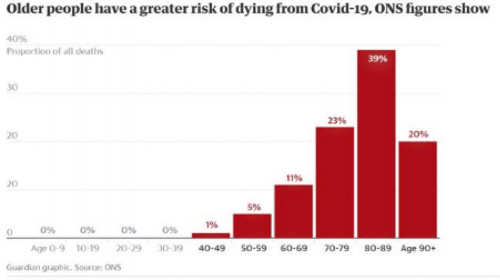 Now that easing of lockdown has begun, this illustration makes clear who will bear the brunt should there be a resurgence of new infections.

The resumption of social and economic activity is happening with seeming indifference to the likely consequences for vulnerable individuals. It’s just not enough to simply state that we should be shielded. The continued isolation of the elderly and those with some underlying illnesses can be complex and requires resources that are simply unavailable for many. Many of us need ongoing medical attention, as well as assistance with the ordinary tasks of daily life.

The special needs of older and other vulnerable individuals, particularly those of us who live alone, are rarely spelled out, let alone addressed. Yet we will be among those most affected if a second wave follows a relaxation of lockdown.

Are sufficient resources being allocated to staff at care homes or to families who care for their elderly relatives?

Since the sad answer is nothing much, it’s reasonable to reflect on how we arrived at a place where our political leaders are so indifferent to the plight of older people.

I was born in 1933 and so have lived through several critical societal changes along the way to where we are today.

This ended with the rush to privatise everything that marked the advent to power of Mrs. Thatcher and Ronald Regan. Mrs. Thatcher famously declared that there is no such thing as society, and in her biography stated that: “There are individual men and women, and there are families. And no government can do anything except through people, and people must look to themselves first.”

As governments have starved public services of resources in pursuit of that ideology for many years, we now have had enough time to see how well that’s worked out.

It certainly hasn’t worked out well for me and for others my age. Leaving the public interest in the hands of individuals and their charities has not worked for most of us. Among the more obvious changes that have become apparent with privatization are that life expectancy has declined, income inequality has widened and inequities in the access of health care have increased.

And for whatever reasons we were woefully unprepared for this pandemic. Maybe, and not coincidentally, the UK, where privatization has proceeded relentlessly, and the USA were the least prepared of all.

Maybe it’s time to restore a concern for the common good and the engagement of government in promoting it. We should expect our leaders to be working to improve the lives of all, not presiding over an administration that has seen the erosion of previously fought for benefits.