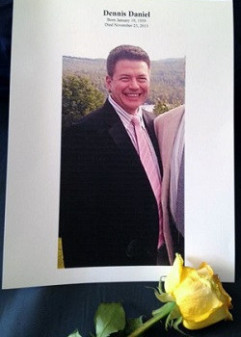 The sad news today that Dennis Daniel has died has left me reeling and my heart goes out to his partner, Ken Lundie, and their family and friends. When Dennis became seriously ill a few weeks ago, it was a shock. Every healthy organization has someone who serves as the glue, holding things together, the soothing balm, healing internal conflicts, and the institutional memory, knowing and sharing the organization’s past. In some organizations, that might be three different people, but at POZ all three roles were embodied in Dennis.

Dennis and I met in 1988, after his partner, Nick Pippin, founded the People With AIDS Theatre Workshop, the first theatrical company comprised entirely of people with the virus. At the time it was a radical idea and received national coverage. Some snickered or were patronizing, thinking it was a sad desperate effort by people who were dying. But Dennis and Nick knew the power of theatre, as it had been transformative in their lives, and knew that the People With AIDS Theatre Workshop was creating as much hope as it was creating drama.

At the time, I was the direct mail fundraising consultant for Gay Men’s Health Crisis and Dennis was suggested as someone who might be willing to sign a fundraising letter, telling prospective donors about the challenges he and Nick faced. Dennis was quiet and uncertain whether or not he would be comfortable putting his name on a letter that would be mailed to tens of thousands of people; bringing that kind of attention to himself simply wasn’t his style then, or ever. When he decided to do it, I think it was because he felt obligated to GMHC, which had been an important source of support for Dennis and Nick.

But once we started working on the letter, and he realized we could tell the real story of what they faced and how they coped with Nick’s illness, he became more enthusiastic. Once the letter was in the mail, he wanted to know how well it was working, which lists were responding best and how much money it raised for GMHC. We became friends and when he decided to leave his job, I was very happy to bring him into my company about five years prior to when we launched POZ. As proud as I am of POZ, inside I always secretly wince a little bit when I’m called “the Founder” because the truth is there were many people who helped me launch POZ and Dennis was as central to that accomplishment as anyone.I sold my interest in POZ nearly a decade ago, but Dennis was there from the beginning right up until his death. His official title was the company’s controller, but his role was far more than simply administrative or financial. He also was a fantastic editor and he had excellent judgment about story ideas, design and what would resonate with our readers. I relied on him in many ways. Dennis never varnished the truth, whether it was about how meager the company’s bank account was or what he thought of something I had written. The trust and confidence I had in Dennis was about as absolute as it could be. It was the same for our staff and contributors; he listened with great empathy, always provided sound and practical advice and when a secret was shared with him, it stayed with him.

Dennis left his native Louisiana as a young man, but the state never left him. Each year he was our resident Mardi Gras reminder and, early on, was appalled to learn I had never visited New Orleans. When I finally was going for the first time and told him, he sort of grimaced and said, “Well, it isn’t Mardi Gras, you can’t really understand it until you go for Mardi Gras.” Later, when I did visit for Mardi Gras, he provided detailed instructions--perfect instructions--for where I was to go and what I was to do.

Dennis cared for Nick for years, including through some very difficult times, until Nick died in 1990. For a time Dennis, Nick and Nick’s mother all lived in a studio apartment. It was not easy. After Nick’s death, I’m not sure he expected to be partnered again. At that time, so many of us had a hard time imagining a future; everyone was dying around us all the time, each day was tenuous, we didn’t even talk about plans beyond a month or two or three.

But when he became friends with Ken Lundie and they started spending time together, it was obvious he was in love because Dennis’s beautiful smile had returned. When their friendship became a relationship, it also was the creation of an extended family, with large parties and holiday gatherings at their apartment. Dennis was generous, compassionate and fun and will be missed so very, very much.

This month’s issue of POZ features the “POZ 100”, focusing on unsung heroes. How apt that is the current issue. There is no POZ unsung hero more deserving of recognition and appreciation than Dennis Daniel.