Did Gilead’s Viread Break My Ankle?

On June 4, I stumbled on a sidewalk in Amsterdam, where I had been at a board meeting of the Global Network of People Living With AIDS.  I fell

where a sidewalk went from smooth concrete to the rough, uneven surface of Belgian block.  That simple stumble, not unlike many I have had in my life without incident, fractured three bones in my ankle.  Happening in Amsterdam made it sound almost incriminating, as some have assumed I was drunk or high, enjoying that city’s famous reputation.  Not the case; I was stone sober.

It required surgery on both sides of the ankle, a plate, several screws (you can see two long ones on the right and one of the shorter ones on the left) and a whole bunch of pins.  My newly-bionic right ankle matches my bionic left femur, which received hardware after an unfortunate incident with a motorbike in 1987.  The fracture did not come as a total surprise because two years ago, I was diagnosed with “profound” osteoporosis, attributed in some significant part to tenofovir, known as Viread, the powerful anti-retroviral drug I was taking (and which is also found in Gilead’s Truvada and Atripla).

Six years ago, when I started Viread, I was told nothing of this possible side effect.  While there was already some data indicating some risk, most community clinicians and patient advocates had not been informed about it.

HIV itself, as well as a number of other anti-retroviral AIDS drugs may also 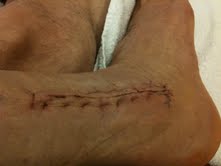 contribute to bone loss, but there is growing evidence which points to tenofovir (found in Viread, Truvada and Atripla) as a particularly intense demineralizer.

I requested a bone density test two years ago, after an acquaintance on Viread, who was in his 40s and relatively healthy, broke his hip.  My test showed, according to the endocrinologist, that I had “profound osteoporosis” and the bones of "an 85 year old woman" (women suffer more severe bone loss than men).

He advised that I take Reclast, a relatively new drug that required infusions and a daily injection, as well as get more exercise, take calcium, Vitamin D and sunshine, all of which build bone strength.  And to stop taking Viread.

I switched my HIV meds (to Prezista with a Norvir booster) and decided against taking Reclast because its nasty side effects were still being discovered; consumer rating scores I found online were damning. Instead I spent a year with exercise, supplements and sunshine, then had another bone density test.  (The test can only be done about once a year, as changes in bone happen slowly).  The new test showed my bones had deteriorated further.

After that second bone density test, I felt it urgent that I do something, so I started taking human growth hormone (HGH), to accelerate bone regeneration and help with my wasting.  I had take a course of HGH years ago, so I knew I could tolerate the side effects. I kept up the exercise and supplements (perhaps less regularly than would be ideal).  I am about to have another bone density test and we will see if I have made any progress.

Bone loss can be stablized or, in some circumstances, reversed.  A tricky part is that one usually doesn’t know they have osteopenia or osteoporosis until one either breaks something or has a bone density test. Typically, there are no outward symptoms.

Today, Viread is required to include several paragraphs about how it causes bone loss in their required prescribing information.  The last sentence of it reads:

“The effects of VIREAD-associated changes in BMD and biochemical markers on long-term bone health and future fracture risk are unknown.”

If you are on Viread, Atripla or Truvada--especially if you are an adolescent, female, over 50 or have any history of fractures--I urge you to get a bone density test.  This will give you a base-line against which you can compare future tests to measure the rate at which your bones are demineralizing.

Five friends (all male, in their 40s and 50s) I know who were taking Viread had bone density tests taken, on my recommendation.  Four were diagnosed with osteopenia (milder bone loss) and one with osteoporosis.

Overall, bone fractures amongst people with HIV are increasing at an astonishing rate.  The HOPS study, as reported by AIDSmeds.com’s Tim Horn, showed that from 2000 to 2008, people with HIV had seven times the rate of fractures requiring hospitalization and three times the rate of fractures treated on an outpatient basis, as compared to a similar HIV negative cohort. Three quarters of the HIV positive arm of their study were also on anti-retroviral therapy.

If you have had experience with bone fractures that you think may be related to your treatment, please post a comment or send me a note.  I think this is a side effect we are going to see with  greater frequency as people are on these drugs for longer and longer periods of time.  If this is what happens after a few years, imagine what it will be like after a few decades?

There is no question that treatment, even with various nasty side effects, is far preferable to the alternative of death.  But it is important that we continue to identify the side effects, alert others to them so their treatment choices are truly informed, and press for research for better and less toxic treatments.  If we wait to hear this information from pharmaceutical companies, or the government, we are waiting too long, after much damage has been inflicted.

Now, let’s see, exactly how much effort has Gilead put into warning people about the demineralizing effects of their drugs?  Perhaps someone can enlighten me.

Yes, our experiences are "only anecdotal evidence" and often quickly dismissed by scientists, pharmaceutical companies and government officials.  But since the beginning of the epidemic, people with HIV have been the experimental canaries in the pharmaceutical coal mine.

We almost always know the side effects first--through our oft-discredited anecdotal evidence--long before doctors and drug companies and AIDS organizations and government officials tell us about them.

In the meantime, I am out of a wheelchair and learning to hop around on crutches.  The bright side is the surgery is better than limping the rest of my life and the crutches are giving me a much-needed upper body workout