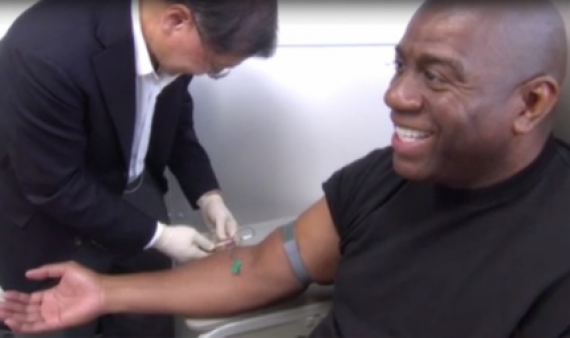 Did Magic Johnson Just Donate Blood to the Red Cross?!?!

Every so often, we run into a pesky, persistent rumor that people continue to circulate, especially on the Internet and on social media. One such rumor resurfaced again this week: the claim that Earvin “Magic” Johnson was donating blood to the American Red Cross for Lymphoma and Leukemia patients.

Perhaps folks are prone to falling for this “story” because it includes this image (above) that looks like the basketball legend is, in fact, donating blood. Plus, he appears to be in excellent health, which has led some people to mistakenly think he has been “cured” of the virus. So what’s the deal with the story and photo?

First some facts: People living with HIV cannot donate blood and organs to the general public because HIV can be transmitted this way. Unfortunately, back in the epidemic’s earlier days, people did contract the virus through donated blood products. Today, it is once again safe to receive blood transfusions because they are always tested for the virus.

So, of course, the Magic Johnson “news” is entirely fictional. It utilizes a photo of Magic Johnson getting regular blood work. As Snopes explained in a piece debunking the rumor, the photo is a still from PBS’s 2012 documentary Endgame: AIDS in Black America, in which Johnson speaks about his experience living with HIV. Clearly this is a photo taken out of context, but it has caused quite a stir on Twitter.

For readers who may not know, Magic Johnson is a retired basketball star whose career ran through the 1980s and 1990s. He was diagnosed with HIV in 1991, and he has been a major advocate and spokesperson for HIV prevention, treatment and education.

Hopefully, rumors like these will soon fizzle out. Misinformation only causes more unnecessary panic about HIV and stress for the person the rumor is about. Rumors were no fun in high school, and they are not fun now.