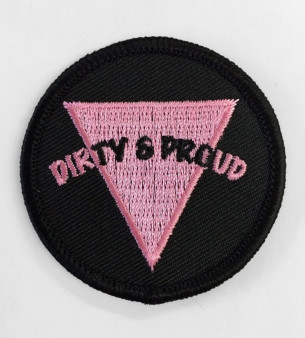 We begin with dirt, both as material and as a marker of bodies. Of a “dirtiness,” etched in language, that is the working of a decidedly serophobic ideology. Think of the many times I’ve heard the word “clean” as a way of saying seronegative. Dirtiness, here, is not just a product of language, but a mode of population management—a way by which some sets of lives are deemed worthy on and over others. In this way, dirtiness, too, speaks to the violent workings of a number of other markers placed on and in bodies.

What if, to call out “dirty & proud,” is both a rejection and a kind of embrace? A way of violating the call to respectability as some kind of promise to a “livable” life. A way of insisting on the messy and subterranean life that grows through the cracks of a structure devoted to its removal, to its taming.

I say this because, in different ways, I am dirty too.

(some more about me, if you’re curious:

There is a kind of militancy, the work of punk, that lies in the embrace of dirtiness. Not a call to pride, but, I think, a call to something else that is just beyond us, beneath us. A critique of the world and its ordering. We see Noelia le Shalá and her band of travestis, Las Indetectables, performing next to a dirtied Chilean flag, held upside down, with the words Aborta $hile scrawled over it. In the band’s performances, they call attention to anti-trans and anti-lesbian violence in Chile, the machismo of South American social movements, and the history of Spanish conquest—all through punk sensibility, bloody shock-value performance, and an aesthetic claim to the dirty. 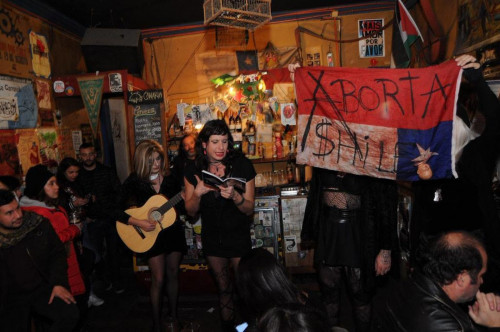 An image of Noelia le Shalá reading a book besides her band, Las Indetectables while performing next to a dirtied Chilean flag, held upside down, with the words “Aborta $hile” scrawled over it.Visual AIDS/Noelia Le Shalá, Las Indetectables, photograph

I think, too, of the Chilean travesti artist and AIDS activist Hija de Perra, who was known to speak of her artistic persona as her propuesta inmunda, or her “filthy proposal.” With thickly-painted and high-arched eyebrows, blood-red lipstick, and smiles showing clenched teeth, as well as with body horror film, techno-punk music, and DIY cabaret performances, Hija de Perra advanced an unapologetic aesthetics of filth from her position as a travesti, a global southerner.

Inmunda, broken down further: In- (not, without) and mundo (world). According to online dictionaries, the root of mundo first meant bodily cleanliness, and from there, expanded to mean the world, as pure, perfect, and universal. To be inmunda—filthy, sucia, of the dirt—can be a way out of the world. Which is to say a critique and a call to the abolition of a world structured by anti-Blackness and white supremacy, settler colonialism and imperialism, capitalism and the nation-state. A portal to other dimensions of knowing, of feeling, of being with one another.

Hanging on my wall as I write this: a poster by Charles Ryan Long in collaboration with Christopher Paul Jordan, titled “I am HIVx.” Bursting red letterpress text on cream paper announces: “Attention!!! People Living with AIDS (by which we mean everyone on the globe.)” Here, PWA, a person-first term adopted in the early days of HIV/AIDS activism, means not just those who are seropositive, but all of us who are in relation with them. To say “we” or “us” here is an experiment. It is an attempt at a “we” that is not coherent, or clearly universal. It is a “we” that acknowledges, foregrounds, that some of “us” are closer to the flame than others. A “we” that tells “us” we have different inroads out of the world - some of us marked traitors to this world by birth, some of us needing to work against complicity towards traitorship. Some of us who must do both. 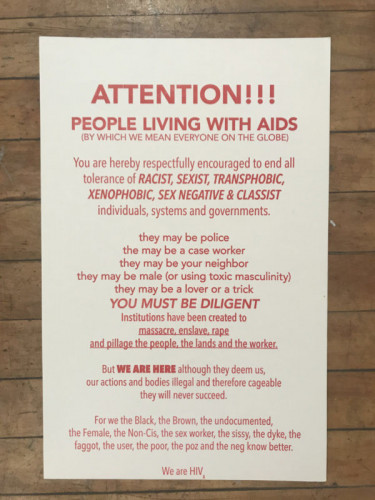 Visual AIDS/Charles Ryan Long, “I am HIVx,” 2018, letterpress on French’s, 17 x 11 in, in collaboration with Christopher Paul Jordan

But, this “we,” I think, is nonetheless necessary. It is a demand for our interdependence, our relation, a way of being together without assuming sameness. An impure politics that insists on what is undisciplined about us. A politics of dirt that directs us to the ground, to our incoherent bodies, to each other. Because dirt springs life, again and again.

Part II. At the Water’s Edge

We end with water, as substance and site. In recent years, I’ve made a kind of habit where, in moments of crisis, I walk to the edge of the Hudson. I will cry, I will laugh, I will just sit there, peering into muddy waters. At this moment, it is maybe my only spiritual practice. Being there feels like a way of communing with ghosts. I go to the Hudson with grief, because the fem queen found in the water is a haunting violence we still encounter into the present. And the piers still brim with energy just under the surface of their gentrified glean. They have been, and still are, sites of cruising, of voguing, meeting places for those pushed to the edge of the island. The piers brim with the energy of those who have lived there, have hung out there, have fucked there, have struggled there. As I sit there, I commune, imagine; I am challenged, haunted. It aches, this full body prayer.

A coastal skyline. The sky is muted gray-blue, spotted with clouds. The light is muddled, indirect, perhaps it is dusk. The water, murky. A queen stands at the water’s edge.

Scene 1. Marsha P. Johnson was known to speak about seeing her father and Neptune, the god of the sea, in the Hudson River. On multiple occasions, she was seen throwing offerings, usually her own clothes, into the water. Her spiritual practice was extensive, friends recount that she would pray at Greek Orthodox, Baptist, Catholic churches, and Jewish Synagogues. She did so to “cover all angles.”

Scene 2. In her video performance, “Stones and Water Weight,” Mykki Blanco stands on the rocky incline of a quarry in Norway. Gingerly climbing downwards and to the center of the frame, she pulls out pieces of clothing from a basket—pale, pink, and purple frilly numbers, slips and dresses with lace and ribbon. Her voiceover, as she finishes arranging them on the stones around her: “If I can be in tune with Gaea, or the feeling of Gaea…” The word “Gaea,” the name for the goddess of Earth personified, repeats in a kind of staccato. Blanco picks up an angled stone, holds it against her stomach, eyes closed. After a while, a feat of endurance, she drops it, touches her face, looks up at the sky. 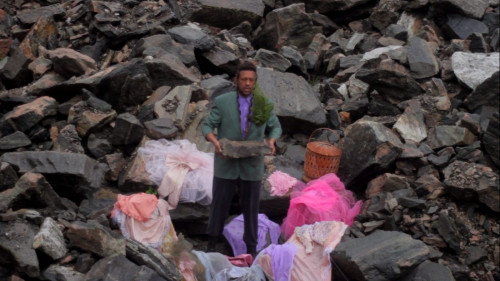 An image of Mykki, a genderfluid Black femme wearing a green blazer, purple blouse and black pants while holding a black boulder. They are standing in a rocky quarry located in Norway with pink and purple lingerie encircling them. They are lifting heavy rVisual AIDS/Mykki Blanco, Stones & Water Weight, 2017, Video still

Scene 3. In a 1995 video interview of Sylvia Rivera by Randy Wicker, posted to Vimeo by Tourmaline, we see her living on a houseless encampment on the Hudson piers. The camera pans to show a small pier, post-industrial detritus intermingling with untamed clumps of grass. Then, Sylvia in profile, Speaking of Marsha’s death in 1992: “When she died, part of me went with her … because one of our pacts was that we would always cross the River Jordan together. To me, this is the River Jordan—the Hudson River.” She professes to feel Marsha’s spirit everytime she looks at “that damn river.”

In each, she meditates on where water meets dirt, or concrete, stone, or a wooden structure. Near the river, on a bench, on the pier, on jagged stones, in the bathtub, on the floor of the bathroom. And we hear the fragments: Neptune, Gaia, the River Jordan. In each instance, something out of frame. In each, an imaginary of something else, attempt to attune oneself to the frequencies of life at the seams of the known, the visible. I sit by the Hudson, and as in Peter Hujar’s photograph of the river, the surface of the water is lush, dark, unwieldy. The water conceals and it holds, and the babble of many voices may just barely be audible. But they are there, perhaps in repose. Reminding us, demanding more of us—can you hear them? 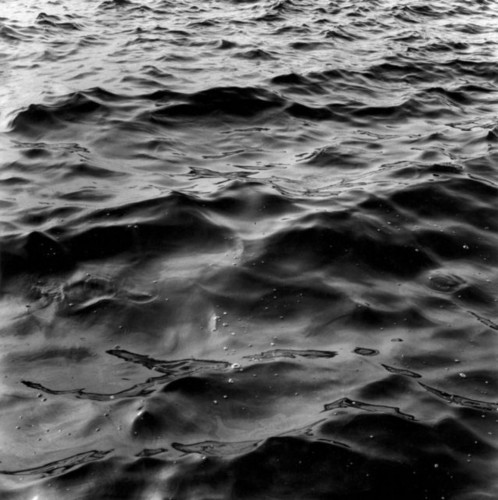 Sebastián Castro Niculescu is a trans Latina writer, artist, and organizer from New York, by way of Ecuador and Romania. Her work considers the relation of her marked body to many others, through fleshiness, leaks, abjection, and other corporeal stagings beyond the hold of respectability. In her critical writing, she seeks to offer a “trans of color critique” through embodied strategies in performance work by racialized trans women artists from the 1970s to the present. Her performance work is reviewed in Artforum, and her edited book on personal ads is forthcoming from Pink Jacket press. She co-organizes the NYC Trans Oral History Project.