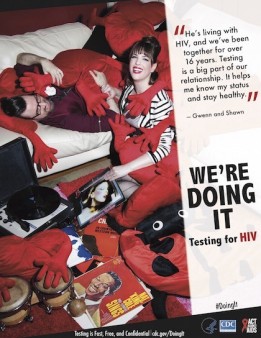 Q&A About “Doing It” with CDC

As many of you know, we are a part of Doing It - CDC’s new national HIV testing campaign. There was a lot more that went into creating the campaign than you might think, like finding real people (like us!) who are passionate about testing and want to share their story as part of a national campaign. We loved being a part of it, so to celebrate Valentine’s Day, Karra French, one of the coordinators on set, sent us a few questions to answer about our experience, and why Doing It means so much to us.

KF: Why did you want to be a part of the Doing It campaign?

Gwenn: We both believe that testing for HIV is so crucial. We also think it’s important to show that serodiscordant couples like us can have a healthy and happy relationship. A lot of people think that a positive test result means the end of their love life, which puts up another barrier to getting tested. But that couldn’t be further from the truth.

Shawn: The photo shoot for the Doing It campaign was a lot of fun. We weren’t expecting such a cool make-over, so it felt more like a modeling gig than an HIV testing campaign - which is good! We believe that you have to disarm people to get information across; you can’t come in heavy-handed or preachy and expect people to respond. Everyone’s attitude at the shoot was very relaxed and we knew that the results of all the hard work would reflect that- and it did!

KF: Were you comfortable being in front of the camera?

Shawn: We were. Since we’ve been together, we’ve shared our story a lot. But that doesn’t automatically equate comfort. If a photographer asks us to pose in a weird way or tells us not to smile so much, that raises a red flag. Thankfully our experience with the Doing It campaign didn’t have any of those fear-based elements that we’ve encountered before. Everyone was so accepting and supportive of our participation, and really understood what the heart of this campaign is all about.

KF: What was the most memorable part of the day?

Gwenn: Seeing Shawn’s pompadour! He’s tried to get his hair to do that again, but that was a professional job.

KF: Do you ever look over your shoulder, expecting to find three dozen (literally) armed heart pillows following you around?

Shawn: Yes, I do! It starts as a nightmare - they walk slowly towards me but then it’s fine because they just end up giving me a big hug.

KF: How does your participation in the campaign help others?

Gwenn: We hope that it helps people get over their fear of being tested for HIV and understand that it’s better to know your status. Most importantly, we want people to know that a positive test result doesn’t mean that you aren’t worthy of love and happiness.

KF: What does the campaign theme, “I’m/We’re Doing It,” mean to you?

Shawn: Well, there’s the obvious double entendre there... so we won’t get too graphic on what “doing it” means to us. The theme is great because of that. It brings up the idea of sex but then directs people to information about HIV testing. An HIV testing campaign should acknowledge sex - in a fun and non-judgmental way.

KF: What can people learn from your serodiscordant relationship that they can apply to their own lives?

Gwenn: From the outside, I think that some people can’t understand how a couple could deal with HIV. But that just comes from a lack of understanding about transmission and current treatments for HIV. If you take it down to the basics, there’s a lot more to learn that goes beyond HIV. With us, we know Shawn’s medical conditions. And we know mine, as well. It’s about staying healthy together and being there for each other. If that’s not what love is about, then I don’t know what is.

KF: What would you tell someone that is fearful or reluctant to get an HIV test?

Gwenn: We’d say that we understand - we’ve been there. The first time I got tested, after being in a relationship with Shawn for six months, we were both nervous. We’d been completely safe, but we still had that fear... and we were HIV educators! Over time that aspect of it got easier, but we remember that first time and can empathize with anyone who is nervous about getting an HIV test. Our advice is simple: you are worth it. There is such a risk to someone’s health who is HIV positive and doesn’t know it.

To find out more about the Doing it campaign visit cdc.gov/doingit. You can check out our video and get a real glimpse of Shawn’s pompadour in action. 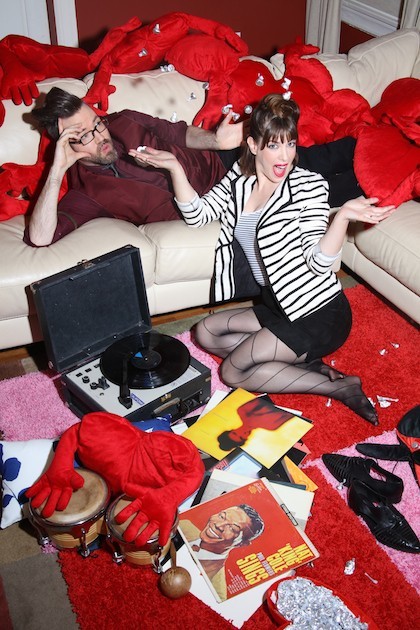