Twitter
Facebook
Pinterest
Tumblr
Email
Advertisement
Last week another kick to my soul nuts was delivered by the Republican filibuster in regard to the repeal of Don’t Ask, Don’t Tell.  Of course, many other benefits to troops were also put on hold due to the rampant homophobia of folks who’d never serve themselves (McCain and a select few aside, of course).

I say if you vote for multiple wars, you damn well should stand out of the way of capable Americans willing to put their lives on the line to fight them. 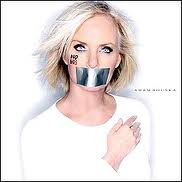 As for McCain, I wish Cindy McCain could have removed her NOH8 duct tape from her mouth and talked some humanity into her husband, who once fought so bravely to protect our country but, this year, is fighting hard to protect his job.  It’s an election year, and he has a base to appeal to.  Can’t get frisky on the issues, not now... not ever.  I gotta think if a gay Rambo had busted in to save his ass in ’Nam when he was a P.O.W., he wouldn’t have filibustered that.

Am I in a particularly salty mood?  Yes.  Because I’m beginning to realize that whether the Republicans are in control (my entire 20s were spent educating about HIV, condoms and sexual health under a federally mandated, Bush-stamped abstinence only agenda) or the Democrats, I will be upset by what’s happening in the world of politics.  It’s enough to make one want to curl up and just ignore it all until someone else- or simply time itself- corrects the problem.

Do I think DADT will be repealed?  Yes, especially since the majority of voters support the repeal of this discriminatory and oft-abused measure: namely the Don’t Ask part of the deal...

I know I can’t personally fight the wars: I have a bleeding disorder and, quite frankly, I’m a wuss.  But when I can do is voice my disapproval.  Wuss or no wuss, we should all do the same.  Because the wars of ideology at home are just as important- if not more so- than the wars we fight abroad.  This is for the heart of our country, and if the only casualty is ignorance then the eventual victory is definitely worth fighting for.

A ridiculously humorous take on Gays in the Military by the Onion.  Please remember that this is a spoof, it’s fake, it’s comedy.